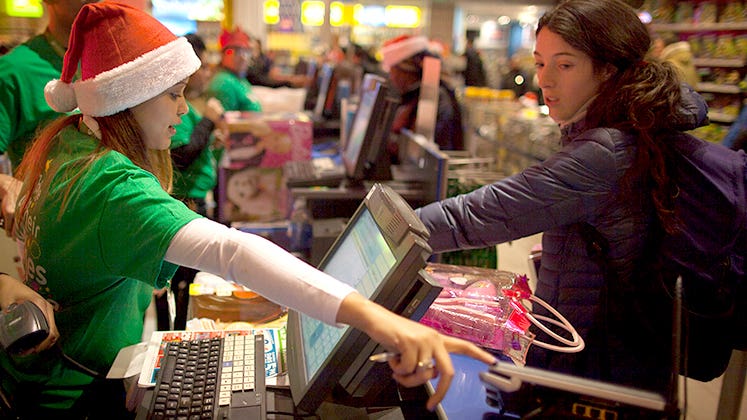 “It’s just not worth it,” says the style blogger, who had a nightmarish shopping experience the day after Thanksgiving about five years ago. “There are one or two deals that are really, really good, but those are the ones where it’s the most conflict to get. The rest of the items … it’s a good deal, but you know, sometimes you can get that same deal or close to it on a different day.”

Sherrill is not the only consumer who won’t be visiting their favorite retailer Nov. 28.

Just 28 percent of Americans plan to shop in a store on Black Friday, according to a survey commissioned by Bankrate and compiled by Princeton Survey Research Associates International. Internet-deals bonanza Cyber Monday was even less popular, with only 25 percent of consumers saying they planned to shop online Dec. 1.

Why are folks electing not to show up for what are widely considered the best days for holiday deals? Simply put, they don’t have to.

While some people are holding off, there are others who are shopping earlier. A few years ago, retailers started opening on Thanksgiving Day in an effort to win a bigger chunk of Black Friday business. Macy’s, Kohl’s, Sears, Wal-Mart and J.C. Penney are among the retailers planning to do so again this year.

These early sales are driving traffic away from traditional Black Friday and Cyber Monday events, says Trae Bodge, senior editor at RetailMeNot.com. In fact, 25 percent of consumers pegged Thanksgiving as their favorite shopping day as part of a survey it conducted earlier this year.

David Bakke, a 48-year-old Norcross, Georgia, resident, learned just how popular Thanksgiving sales were when he attempted to shop on the holiday in 2013.

“I tried to get into Wal-Mart and that was just complete insanity,” he says. Rather than weather the crowds, Bakke went home, rested and then decided to try his luck again the next day.

“I was stunned at how few people I saw,” he says. “The stores were dead on Black Friday because everyone had gotten everything done on Thanksgiving night.”

Early sales, too, aren’t limited to Thanksgiving. Some retailers are already offering Black Friday promotions. Wal-Mart, for instance, started featuring “Rollback” prices on more than 20,000 items Nov. 1. Over at Office Depot, every Monday has been Cyber Monday since Nov. 3, and Target is hosting a special Black Friday presale Wednesday, Nov. 26.

Overall, “Black Friday is loosening up a lot,” Bodge says. “There are a lot of different options for consumers now.”

Some changes to the shopping holiday itself — including staggered deals as opposed to one-time doorbuster sales, aggressive price-matching programs and guaranteed product availability — are meant to mitigate rowdy Black Friday crowds that also may be keeping some shoppers at home.

“Black Friday had a bad rap for a while and it seemed to get worse every year,” says Bodge. “From a retailer standpoint, it was really on them to do something about it.”

Thanks at least in part to these and other adjustments, industry experts expect the big day to endure.

“When you look at one specific day, you’re not going to get over 50 percent of people going to shop,” says Jesse Tron, a spokesman for the International Council of Shopping Centers, a trade group which is forecasting a 4 percent increase in sales during the 2014 holiday shopping season. “For the most part, Black Friday will be the busiest shopping day of the year.”

Who is lining up?

Of the age groups, millennials are the most likely to brave Black Friday. According to Bankrate’s survey, 54 percent of consumers ages 18 to 29 say they will shop either in stores or online the day after Thanksgiving. 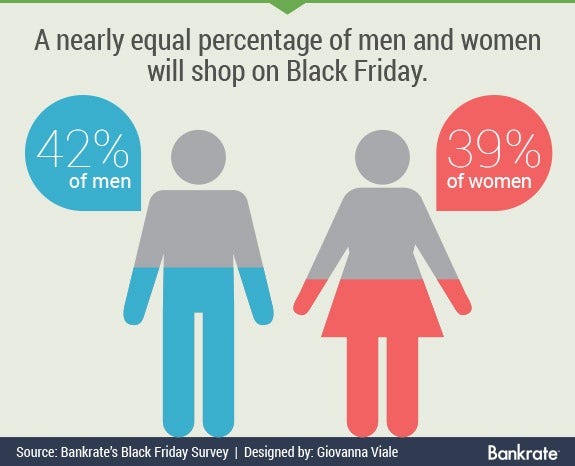 Some of the added interest can be attributed to the fact that younger consumers generally have less responsibility than other demographics.

“It’s easy to go out there when you’re not worried about the mortgage,” says Pam Quintiliano, a specialty retail and apparel analyst with SunTrust Robinson Humphrey.

“That generation is much smarter … in terms of their purchasing power,” Quintiliano says. “They’re very savvy about how to research to get the most bang for your buck.”

Collectively, Black Friday shoppers anticipate spending an average of $399 per shopper, with a median of $200.

Yvonne Miaoulis, a 25-year-old Emerson, New Jersey, resident, is looking forward to shopping with her 23-year-old sister on Black Friday because the duo scored some “really awesome deals” last year.

“Mostly, we would buy stuff that was on sale already but with an extra percent off,” she says. “It was worth it enough where I am looking forward to it this year.”

How people are paying for purchases

Miaoulis plans to put her Black Friday purchases on a credit card — a decision that’s a bit outside the norm for consumers.

Millennials, in all instances, were the least likely to shop with a credit card, with only 11 percent planning to use the payment method in stores on Black Friday and 35 percent opting to use one on Cyber Monday.

These stats aren’t surprising, considering Americans — and millennials in particular — have cut down on the use of credit cards following the Great Recession. Still, the choice may not always be the most beneficial for financially savvy consumers already in the habit of paying their bills off at the end of the month.

The Web, for instance, is one of the riskiest places to swipe a debit card since account numbers can easily be compromised and the payment method is generally subject to lower fraud protections than a credit card.

Plus, “credit card companies have the revenue source to be much better (at) customer service and to provide more perks,” says Thomas Johnson, vice president of strategic alliances for credit-solutions provider Zoot Enterprises. These perks from credit cards include, among other things, extended warranties, rewards and price protection.

Full survey methodology:
Princeton Survey Research Associates International conducted this survey from Oct. 30 to Nov. 2, 2014, using a sample of 1,000 U.S. residents. U.S. telephone interviews were conducted by landline and cellphone. The margin of sampling error for the complete set of weighted data is plus or minus 3.6 percentage points.