Not long ago, you had to pay top dollar to get the full cellphone experience, including unlimited calling, more texts than your thumbs could possibly pound out and all of that data.

Today, we demand gobs of calling time, texts and data — but we want to pay less for it, too. The good news is, we can.

Some carriers offer plans that charge well below the nationwide average, which is more than $90 per month per phone among the four major cellular providers, according to Cowen and Co., a financial services firm. So-called discount wireless carriers allow you to use the same amount of data, minutes and texts as the big wireless companies offer; you just pay less.

As for trade-offs, you’ll have a limited selection of phones to choose from and service may be limited based on where you live. You also won’t find much in the way of phone subsidies here, either. You’ll pay full price for a new or refurbished phone, but you won’t be saddled with a contract.

Here are a handful of popular discount cellphone carriers, what they feature and how to know whether they’re right for you.

Coverage and data speeds: Like a lot of discount carriers, Ting piggybacks on Sprint’s network, so you’ll get the same type of coverage you would get with Sprint. Customers also have access to Sprint’s high-speed 3G, 4G and LTE networks.

It’s worth noting, however, that Sprint ranked last in Consumer Reports’ annual cellphone service survey. Sprint’s service is so notoriously poor, the company once acknowledged it, asking customers “to ‘pardon our dust’ as we build out and upgrade our network.” Ironically, Ting — again, using the Sprint network — tops the magazine’s survey for best service provider.

Ting offers a coverage map on its website that will give you an idea of what service is like in your area. The company doesn’t offer support for data roaming, which means if you find yourself in a service area not covered by Sprint, you won’t be able to get Internet service.

Plans: Ting follows a pay-what-you-use model, using tiered pricing. You’ll pay a standard fee of $6 per device, but from there, the rates are low, and there’s no contract. Ting says its average customer pays less than $30 a month. Use your phone on Wi-Fi most of the time, and your rate may be even lower. There are specific rates for international calls, messaging and data, depending on the country. You can add another user for an extra $6 a month and share minutes, texts and data.

Phones: You can’t use the iPhone 6 on Ting, but you can choose from a variety of newer phone models, including the iPhone 5s and the Samsung Galaxy S5. The phone, however, must be compatible with the Sprint network. If you’re coming from another carrier, you’ll have to find a way to unlock your phone, or you can trade it in for a Sprint device.

Is it right for you? Because it’s pay-what-you-use, Ting is a great choice for someone who doesn’t talk on the phone much or use a large amount of data.

But after 1,000 minutes and about 1 GB, your tiered plan is about as pricey as any plan with a major carrier. If you can take advantage of Wi-Fi, Ting’s service would be ideal. You can potentially save even more by sharing your plan with someone who has similar usage habits.

Coverage and data speeds: Like Ting, Republic Wireless uses the Sprint network. Also like Ting, this company’s coverage map will show you where you can get Sprint’s 3G and 4G speeds, depending on whether your plan allows it. However, you can’t make international calls with Republic Wireless.

Plans: Republic Wireless’ plans start incredibly cheap — at just $5 a month. But this will pay only for Wi-Fi access. You can make calls, text and use data features, but only when you’re connected to a Wi-Fi network. For $10 a month, you’ll have access to that same unlimited Wi-Fi capability, but you’ll also get unlimited talk and text when using a cellular network. At Republic’s $25-a-month price point, you’ll get all of that, but with access to Sprint’s 3G network. And for $40, you’ll have access to 4G. Like Ting, there’s no contract.

Phones: Your phone choices are limited. In fact, there are only a handful of Motorola smartphones you can choose — the Moto X, for example. While these phones might not be as sought after as the iPhone or Galaxy, they have most of the same features and functionality. But they do have their limits. None of them supports tethering, for instance.

Is it right for you? Republic is a top-notch option for someone who is almost always around a Wi-Fi network. Republic also is a great option for anyone who uses their phone more than most, and can really benefit from those unlimited plans. Finally, if you’re not picky with your choice of phone, Republic might be worth it.

Coverage and data speeds: Owned by AT&T, Cricket uses the phone giant’s network, providing up to 4G speeds. After reaching a certain data cap, depending on your plan, Cricket will slow your data transfer speed, unless you opt to pay for additional high-speed access.

Plans: Basic plans start at $40 a month, but Cricket offers a $5 discount if you use Auto Pay for your bill. This plan offers 2.5 GB of 4G LTE data, reduced to 128 Kbps once you reach your cap. You’ll also get unlimited nationwide talk and domestic text. At $50 per month, you can get 5 GB of data and add international text to your plan. But this plan, and those above it, may not be considered “discount,” as they’re comparable to the cost of traditional plans. You can get an unlimited talk and text plan for $25 a month, but you won’t have access to any data. Customers are not required to sign a contract.

Phones: Like Ting, you can’t use the iPhone 6 on Cricket, but you can choose from a variety of newer models, including the iPhone 5s and the Galaxy S5. You can also bring your own unlocked phone to Cricket, but it has to be compatible with their network and able to use a Cricket SIM card.

Is it right for you? If you’re not a fan of the Sprint network and you’re OK with AT&T’s coverage, you might prefer a Cricket phone. If you don’t use more than 2.5 GB of data per month, you can still take advantage of a relatively low monthly cost.

Coverage and data speeds: Virgin Mobile is also powered by the Sprint network, using up to 4G LTE speeds. Like Ting and Republic, Virgin offers a coverage map to help you see where you’ll have access to Sprint’s service.

Plans: Virgin offers a wide variety of no-contract plans. You can choose a prepaid unlimited plan or plans that cost you only for what you use. The latter starts at less than $7 a month, though that includes only 20 minutes of talk and 20 text messages. Data is not included in the plan. But you can adjust your usage, similar to Ting’s tiered pricing. For example, at 500 minutes, 500 texts and just over 1 GB of data, you’ll pay about $35. Any additional lines are about $7 per month.

Phones: Virgin offers a number of recent models, but some of the best phones — like the iPhone 5s — are out of stock on the Virgin website.

Is it right for you? If you rarely talk or text, you can save big bucks with Virgin. Even with regular usage, the company offers competitive rates. If you use a large amount of data, you’ll benefit from Virgin’s low-cost data rates. Virgin is also a solid, inexpensive option if you share a plan and don’t use more than 4 GB of data, combined. 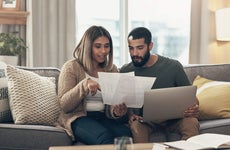 How to pay a credit card bill 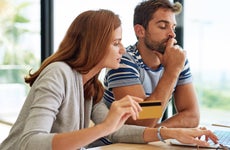 Cut off? What to do if your credit card issuer lowered your limit 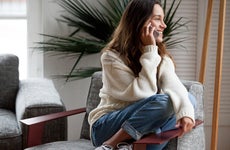 Can you use your cellphone bill to build credit?

Quiz: Find the best cell phone plan for you