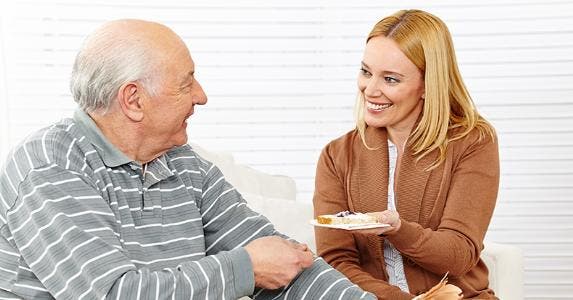 Aging in place — living out your retirement years at home, whether you stay in the house where you raised your children, downsize to an apartment or retreat to a cottage in the tropics — is an overwhelmingly popular idea.

Paul Hogan, co-founder and chairman of Home Instead Senior Care, an Omaha, Nebraska-based international franchise company, says surveys consistently show that 85 percent to 90 percent of people want to stay in their own home as they age.

“There is a rapidly growing population seeking services and ways to do that,” says Hogan, who with his wife, Lori, co-authored “Stages of Senior Care: Your Step-by-Step Guide to Making the Best Decisions.”

If your desire is to grow old in your own home, now is the time to consider how you’ll pay for the costs associated with that choice.

The good news is that while the cost of care among all care providers has steadily risen, the cost of facility-based care has grown at a much greater rate than it has for home care, according to the Genworth 2014 Cost of Care Survey. For example, the median annual rate for a private room in a nursing home rose from $74,208 in 2009 to $87,600 in 2014, a compound annual growth rate of 4.19 percent. The median hourly rate for a home health aide rose just 1.32 percent, from $18.50 to $20.

More On Health Care For Seniors:

Hiring home health care services for a few hours a week over a short term is certainly much less expensive than staying at a nursing home or assisted living facility, but the cost of constant care, even at home, can add up. The MetLife 2012 Market Survey of Long-Term Care Costs puts the national average hourly rate for home health aides at $21, while the rate for homemaker services, such as house cleaning or errand running, is $20 an hour. If you need both kinds of assistance, that’s more than $200 a day to hire help in five-hour shifts. Compare that to the average daily rate of $248 for a private nursing home room, according to the MetLife survey.

For those who may not require as much personal assistance, Hogan says that at his company, a growing area of demand is for occasional services that fall under the category of risk management.

“They are starting to hire us on to help just one afternoon a week to minimize the risk of a slip or fall,” Hogan says. That might mean having someone come in to handle the laundry, take out the trash and climb a ladder to change a light bulb.

The market is also growing for at-home medical equipment and technology that make it safer for seniors to age in place. For a personal emergency response system — such as the ones in those TV commercials — you might pay about $30 a month for the monitoring service, along with the initial cost of the equipment and installation.

Julie Menack, a gerontologist and certified geriatric care manager in Oakland, California, says among the newest products are motion-sensing devices that can detect signs of possible health problems for seniors.

“If there’s any change in the pattern — for example, if they are constantly going back and opening a cabinet — it might indicate that the person has dementia,” Menack says. “Or if they are going to the bathroom more frequently at night, there might be a medical condition such as a urinary tract infection. A remote caregiver can easily intercede without having to move a person to a higher level of care.”

Medicare doesn’t pay for ongoing home health care services, although it does offer limited short-term coverage of therapy or skilled nursing care for those recovering from an illness at home.

Medicaid does cover home health care services, and some states also cover personal care services or have optional Home and Community Services waivers for nonmedical home care. The bottom line is, unless you meet the low-income threshold for Medicaid, you or other family members will need your own resources to pay the cost of aging in place.

Your retirement savings or cash from your home equity may be able to cover at least some of the costs, but you also might need to consider long-term care insurance.

“The idea of self-insuring sounds great until people actually have to pay the bills,” says Brian Gordon, president of Maga Ltd., a long-term care planning agency in Riverwoods, Illinois.

According to the 2014 price index of the American Association for Long-Term Care Insurance, the average price for $164,000 of benefits is $925 per year for a single male at age 55. A single woman would pay an average of $1,225 per year for the same level of benefits. For aging-in-place customers, coverage can include medical equipment, nursing and nonmedical home care, home modifications, such as ramps and grab bars, and even caregiver training courses.

Gordon urges retirees to talk with their family members about their plans for funding long-term care, whether or not they decide to buy insurance.

“If you decide to self-insure, let them know where that money is being taken from — an annuity, a (bank) account,” Gordon says. “That’s the most stressful time for a family member, trying to get all of this organized. Then, when you throw in the finances, it throws everyone into a tailspin.”