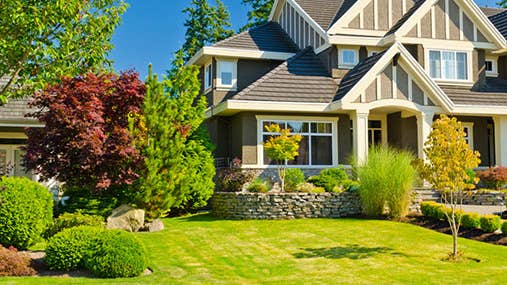 Selling your home? Make sure to landscape

When selling your home, landscaping determines whether your home feels inviting from the outside. Curb appeal is important to 71 percent of homebuyers when choosing their abode, according to a 2013 National Association of Realtors survey. Landscaping is a large part of that curb appeal, says Frank J. Lucco, managing director of IRR-Residential Appraisers & Consultants in Houston.

“That first impression is important,” says Lucco. “If they don’t like the looks of the front of the house, which is mostly landscaping,” often they won’t even go inside.

A landscaping investment could potentially pay a 215 percent return in home value, says Margaret Woda, a Realtor with Long & Foster Real Estate in Crofton, Md. While you may only recoup 68 percent of kitchen renovation fees, Woda says landscaping is money well- spent.

Keeping up with the Joneses is important, says Lucco. If your neighbors’ yards are run-down, spending a lot on landscaping isn’t worthwhile. But if your neighbors have renovated homes with beautiful greenery, you need to do the same so buyers don’t move on to homes with better curb appeal.

Here are five things to consider with your landscaping. 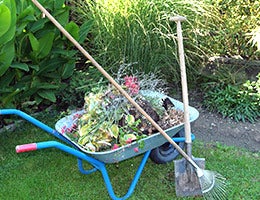 Planning ahead is important if you want to sell your home. “You can’t just decide to sell your house tomorrow and expect the landscaping to be ready,” says Woda. “If you’re thinking of moving next fall, (then) this spring, you should be working on your landscaping.”

Start by cleaning up the yard, removing dead branches, dog droppings, weeds and anything broken, says Woda. “The most important thing in landscaping is maintenance,” she says.

Eric King, of King Landscaping in Atlanta, recommends investigating the unseen, ensuring the downspouts are clean and functional, and making sure drain pipes are properly buried and draining so water doesn’t pool. Then make sure your hard-scapes (things such as patios, walkways and fences) are level and that roots haven’t pushed up sidewalks or patio stones. If your deck has wobbly railings or loose steps, fix them, says King. “People don’t want a mystery,” he says.

Take a serious look at your plants’ health, says Lucco. “Dead and dying (plants) or things leading to additional maintenance problems need to be corrected.”

If you’re in an established neighborhood, remove overgrown shrubs encroaching on the sidewalk or ones that are too big, don’t flower or are out of style. “They look terrible to anyone except the owner,” says Woda. As an owner, you may have an emotional investment in them, having tended to them for decades, but, “Let go of your shrubs. Dig them up.” 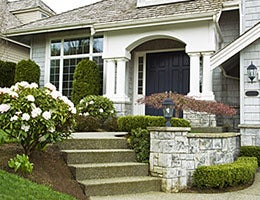 In the front yard, landscaping’s role is to help people notice the house first, says King. The landscaping should pull your eyes to the front door. While the Realtor is opening the lockbox, buyers will be looking around at the landscaping, so have pots of blooming flowers nearby.

Trees, bamboo and other screening plants can be used to hide anything unsightly, such as your neighbor’s garage door or the trash cans, says King. “You want to make your house look good and hide the ugly views,” he says.

Woda says foundational plants such as evergreens are better than those that lose their leaves. “What if you want to sell your house in the winter?” she says. Also, plants that are beautiful when blooming don’t add to curb appeal out of season. Accent plants such as knockout roses bloom all summer. “They’re super easy to take care of,” she says.

Trees can add value, providing canopy, shade and insulation from sun, but they have issues, too, says Lucco. Tree roots can damage the foundation, die or be too close to the house. Buyers may not want fruit- or nut-bearing trees. “Some buyers won’t pay one penny extra and might even cut them down,” he says. 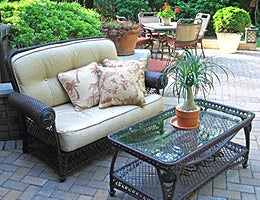 In the backyard, people like a comfortable spot to hang out, says King. Think decks or patios.

Other personalized options, such as fire pits, outdoor kitchens, fountains and lighting, are things that make a backyard more of a paradise, says Lucco. “You don’t just walk out and look at a fence.”

Only install a fire pit, outdoor kitchen or water feature if you want them because you likely won’t recoup your money, says King. “A small statue fountain is less money and maintenance and may not be overwhelming,” he says. But, “Anything over $5,000 that’s hard-scape in those categories, do (it) because you want it, not because you’re doing it for resale.”

As for furniture, it doesn’t have to be expensive, but it should be in good condition, says Woda. “Power-wash it if needed. Get new cushions. That’s an inexpensive way to dress things up,” she says. 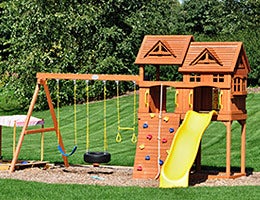 It’s easy to get carried away fixing up a yard to look good for buyers. Woda says not to install anything too personal or unique that lacks universal appeal. For example, she doesn’t recommend keeping play equipment in the yard. “If you purchased a $5,000 play structure and now you’re moving, take it apart and take it with you,” she says. “What are the odds that the next buyer will have children your kids’ ages who like to do the same things?”

Don’t waste money buying all mature plants. “Spend money where you need it,” Woda says. “If you have a few spots driving you crazy where you want privacy, buy one or two big specimen trees. For the rest, put in a 3-gallon flowering shrub.”

When trying to make a statement by your front steps, spend the money and get a larger plant. Otherwise, put in smaller plants, and be patient as they grow.

Fencing is another asset to buyers, whether they have kids or just want privacy, says Woda. “I’ve heard many clients say they’ll have the expense of putting in a fence if they buy that house,” she says. Pick the right fence, though. Alternate board fencing is popular, but you’ll be wasting money if you put in stockade and chain-link fences. 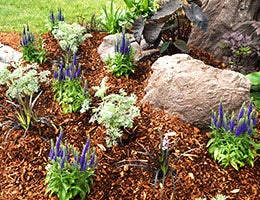 When trying to sell a house, “Carve out a nice, simple lawn area and mulch the bed,” King says. “Limit the number of plants, and simplify the design so you don’t have 200 different plants that people don’t recognize and will be scared to take care of.”

Design the yard with plants and grass that work well in your environment and that don’t need a lot of water, fertilizer and pruning. “We’re not in Fiji,” King says. “We don’t get 80 inches of rain a year. Take a plant that can grow in your area.”

That also means knowing how the plant will grow before you buy it, says Lucco. “It looks good to people when they go to the nursery because they’re in small, 1-gallon containers. And two years from now, they have a giant tree in front of their house.”

A lush lawn that’s well-graded and healthy is appealing, says King. “This is America. We love our lawns.” He adds that the lawn doesn’t have to be large as long as there’s a focal point or play area. “Take care of it, and keep it beautiful.”

Just like inside, remove outdoor clutter, which could include unrelated, different-size plants. King says sometimes he removes plants instead of adding more, and the landscaping looks better. “Life is chaotic enough,” he says. “Landscape should be simple, elegant and beautiful.”