By day, John Melton, 42, is a human resources manager at a construction company in Phoenix.

By night, weekend and vacation, he’s the quintessential do-it-yourself home remodeler, equipped with a workshop, tools, materials and the know-how to get such jobs done.

His latest DIY home remodeling project, a family room makeover, took longer than he’d expected, but his budget, about $3,500, was pretty close to the final cost, and the results were well worth the time and money, he says.

His chief objective was to replace a water-stained drop ceiling that made the room feel small and included a ceiling fan with a decorative spike that put anyone of above-average height, including Melton himself at 5 feet 10 inches tall, in danger of head injuries.

The DIY remodeling project was supposed to take less than a week, but instead it consumed 24 days over a three-month period due to two construction-related surprises — a two-inch variance across the room in framework above the drop ceiling and a piece of header board that stuck out into the room — and a family emergency that took Melton out of state for a time.

About a third of Melton’s budget, $1,300, was used to buy a ceiling-plank system that he cut to size and then installed in the family room. Other purchases for the DIY home remodeling project included wood, drywall, Sheetrock compound, nails, screws, insulation, can lights, electrical wire, some tools he expects to use again in the future and a new ceiling fan.

Melton wasn’t born a home remodeling wiz. He says he started out as a young man with small projects, buying tools and gathering knowledge over time.

“I did minor things in my late 20s and slowly, slowly took on more and became more confident,” he says. “I do a lot of research on methods and tools and whatnot before I tackle something, and it just sort of built over time. I built my tools over time and built my knowledge over time, not taking on too much too early.”

Planning is crucial to DIY home remodeling. Melton says he makes sketches on graph paper and lists of materials, tools and tasks, laying out each step before he begins.

Melton’s wife is an auditor at a county community college system, giving her the skills to help with what Melton calls “the money side” of his projects. The Meltons have two children: one in kindergarten, the other in middle school. The couple financed the family room remodeling project with an income tax refund, six-month interest-free financing from a home improvement store and current paychecks while the project was under way.

“We didn’t want to put the whole thing on a credit card and pay it off over a year. We wanted to knock it out,” Melton says.

Melton says being a do-it-yourselfer saves money, gives him greater control over his projects and provides enjoyment in the process and results. He also chronicles his efforts in a personal blog at www.AZDIYGuy.com.

“Do-it-yourselfers actually make money for the contractor because they mess up the work, and then they have to hire a contractor to redo it,” she says. 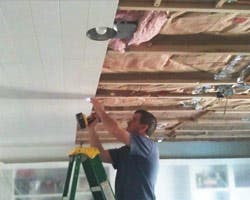 Still, she says homeowners who are inclined to do their own remodeling should go for it, while being mindful of their own degrees of enthusiasm, skill and willingness to learn over time. She also says some projects, like removing wallpaper, are grunt work that anyone can perform at odd hours, while other projects, such as Melton’s family room makeover, take more time and skill. Still other projects, such as refinishing a wooden floor, can be divided into smaller jobs — some handled by a pro, others taken on by the homeowner.

It’s crucial to plan carefully and build up slowly to bigger projects, as Katie Hamilton says and Melton’s experience demonstrates.

“A person who is more organized definitely has the advantage. The more you think through and make your lists and do your homework, the better the result is going to be,” Katie Hamilton says.

Another consideration is space, which can be a challenge in a small home or condominium.

“It’s not fun when your house is a work zone, and you don’t have the space to put the new cabinets that are arriving,” Katie Hamilton says.

Two solutions are to convert an attached garage into a work and storage space, or if the home is vacant, designate an interior room for these purposes. Homeowners who are very cramped space-wise might be happier hiring a pro.