Blinded by the mental image of their dream home, many homeowners don’t realize they may be embarking on a nightmare when they begin a renovation.

The spell often breaks when they find themselves surrounded by dust or realize they won’t be able to turn on the stove or use their own bathroom for weeks.

From mushrooms growing out of the walls to a cat that got tiled over, here are four home renovation nightmares that homeowners shared with us — along with the lessons the owners learned. 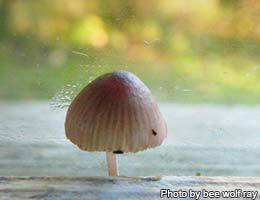 Alvin Naterpaul pays $7,000 to install hurricane-impact windows in his home. When a tropical storm puts the windows through a test, he notices a small leak.

Two days later, his wife tells him that mushrooms are growing out of the window and into their living room.

“She didn’t want to come back into the house until it was all cleaned and fixed,” Naterpaul says. “She hates mushrooms. They spook her out.”

Puzzled, he rips out a piece of the wall. That’s when he realizes an entire section of his living room wall will have to be replaced because water has trickled down from the window joints into the wall.

After spending an additional $850, the mushrooms are gone and walls are replaced.

It isn’t until Naterpaul sees mushrooms growing out of the wall that he learns that the contractor hadn’t pulled a permit to install the windows. A county inspector likely would have detected that the windows and the walls hadn’t been sealed properly.

Is the cat in the wall or under the floor? 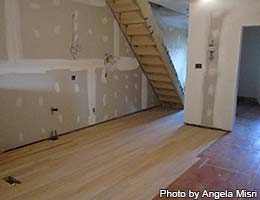 While enduring a kitchen renovation, Angela Misri tells her contractor she can’t find her cat in the house.

“She’s probably hiding somewhere,” Misri says as she prepares to leave to go to work.

Jorge, the contractor, replies: “You have to find the cat, or it will end up in your drywall and dead. I know you think I’m exaggerating, but it happens.”

While Misri and her husband, Jason, search for Darwin the cat, Jorge describes the time he was tiling up a bathroom and heard mewing coming from the wall. He says the contractors on that job had sealed the drywall, tiled and grouted before they realized the cat had sneaked in. The cat had been stuck inside the wall for at least two days, he says.

“We were looking everywhere for her when Jason dropped something, and it rolled into the subfloor, and he said, ‘You don’t think she could fit in there, do you?'” Angela Misri says.

Darwin had found a cozy dark spot to hide between the floorboards in the kitchen and the basement ceiling. Luckily, she was found before the contractor finished installing the floorboards.

The lesson: Get the pets out of the house when remodeling, so they don’t get dusty or tiled over.

The 9-month bathroom from hell 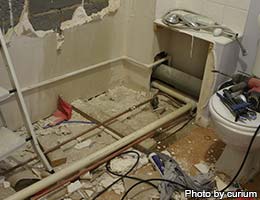 Rushing and her husband demolish their master bathroom when she is one-month pregnant. They figure the remodeling job will be done in three months.

For the next eight months, Rushing has to conquer two flights of stairs to get to the only other functional bathroom in the house. Her master bedroom is on the lower level of what used to be a church.

“Picture a very pregnant woman going up those spiral stairs to use the restroom in the middle of the night for eight months” she says.

A week before her scheduled cesarean section, reality sinks in.

“I realized that not only was the project not going to be finished by the time I left to the hospital, but there were a lot of the elements of the plumbing that weren’t done properly,” Rushing says. “That day I thought I was going to go into labor.”

And so does her plumber as she gives him an ultimatum: “I don’t care what you have to do, but this needs to be fixed and it needs to be right and it needs to happen within the next 24 hours,” she tells the plumber, who manages to finish the job in 19 hours.

The lesson: Maybe it’s not a good idea to remodel when you’re pregnant.

Don’t let that drywall fool you 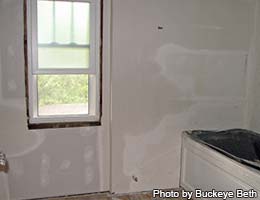 The bathroom from hell teaches the Rushings many lessons. The main one: Installing drywall may look as easy as icing a cake. But it’s not.

Rushing’s husband takes three days off work to drywall the bathroom. Her dad flies in from Texas to Washington, D.C., to help.

“At the end of the third day, we had hung three pieces,” she says. “We accomplished nothing.”

Craigslist comes to the rescue.

“I hired some guys off of Craigslist, and in 30 minutes, they did 10 times the work we had done in three days,” she says. “We just sat there with our jaws open.”

And if you think this nightmarish remodeling experience is enough to keep the Rushings from ever renovating again, here is the latest update.

They’ve leased their D.C. home — six months after the bathroom was completed — and after a two-year recovery in a rental, they are doing several do-it-yourself projects in their new home in Virginia.

“I have a love-and-hate relationship with renovation,” Rushing says. “If I were to walk into a space that is finished, I would be turned off by that. I like creating character in a space and carving out a home for my family.”

The lesson: Have fun with your remodeling projects, and stay away from drywall.