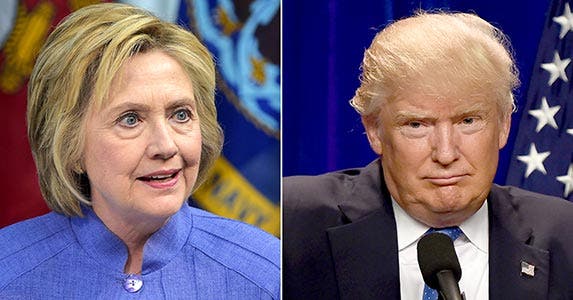 From their speeches and comments, you might assume that Hillary Clinton and Donald Trump are far apart on every topic.

The Democratic and Republican nominees for president are close on issues like Social Security (don’t cut it, although some GOP leaders would disagree), the minimum wage (raise it), and trade (reject the Trans-Pacific Partnership agreement).

But the electoral combatants differ on a few money matters, differences that were on display during the conventions and, later, in dueling economic speeches in Michigan.

For example, in a speech before the Detroit Economic Club, Trump distanced himself further from Clinton on the issue of taxes.

In her economics speech in Warren, Michigan, Clinton offered a little something for everyone — support for clean energy, broadband for everyone, simplified tax filing for small businesses, debt-free college education for the middle class, opposition to trade pacts and more infrastructure funding to create jobs.

Here’s what to know about each side’s positions on financial issues.

RATE SEARCH: Are you saving money for retirement? Check out the CD rates today at Bankrate.com. 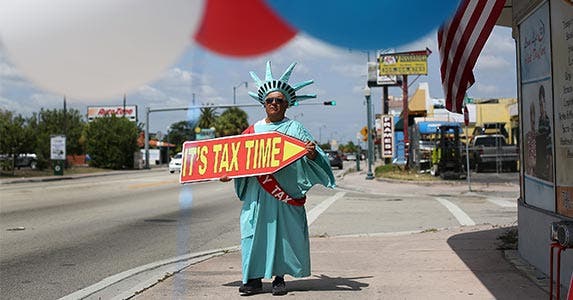 Trump now wants to reduce the number of income tax brackets to 3, from the current 7. His new plan also includes a top tax rate of 33% — up from the top rate of 25% in his previous plan.

In his speech in Detroit, Trump advocated allowing families to deduct child-care spending from their income taxes. Making child-care expenses fully deductible would provide much larger benefits to wealthy families with larger tax bills, according to The Wall Street Journal.

Clinton would implement a “fair share surcharge” on multimillionaires and billionaires and press for measures like the Buffett Rule to ensure that the wealthiest Americans do not pay a lower tax rate than middle-class families. The Buffett Rule would apply a minimum tax rate of 30% on people making more than $1 million a year.

She also has said she’ll close loopholes that:

On taxes, Trump calls for just 4 income tax rates instead of the current 7, with a top tax rate of only 25% instead of today’s 39.6%. He also would eliminate the alternative minimum tax and the estate tax.

As for businesses, Trump proposes a 15% tax rate for all companies, “from a Fortune 500 to a mom-and-pop shop to a freelancer living job to job.”

While Trump’s tax plan is similar to GOP tax policy, its cost has been criticized. Economic analyses of Trump’s plan say it would produce deficits, ranging from $9.5 trillion to $12 trillion over 10 years. 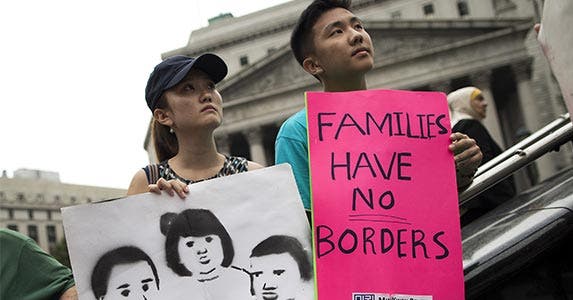 On immigration, Clinton would follow President Barack Obama’s policy, which would allow certain undocumented immigrants who entered the country before their 16th birthday and before June 2007 to receive a renewable 2-year work permit and exemption from deportation.

She also supports deferred action status for illegal immigrants who have lived in the United States since 2010 and have children who are American citizens or lawful permanent residents.

“We can’t wait any longer for a path to full and equal citizenship,” Clinton says.

The Republican Party has taken a tough stance against illegal immigration, but Trump’s is even more provocative. He says he would deport every undocumented immigrant in the United States, build a wall along the border with Mexico and make our southern neighbor pay the cost.

“Mexico’s leaders have been taking advantage of the United States by using illegal immigration to export the crime and poverty in their own country,” Trump said in a position paper.

“The Mexican government has taken the United States to the cleaners. They are responsible for this problem, and they must help pay to clean it up,” he said.

After the December 2015 attacks on an office holiday party in San Bernadino, California, in which 14 people were killed and many others were seriously injured, Trump proposed temporarily banning all Muslims from entering the country.

On the Republican side, Trump’s campaign is formulating ideas that involve a complete overhaul of the federal student loan program, moving the government out of lending and restoring the role of private banks, according to the Inside Higher Ed website.

Other ideas being considered by Trump would require colleges to share in the risk of student loans and discourage borrowing by liberal arts majors, the site says.

In a video on Twitter, Trump says that student debt is a major problem.

Still, in a town hall meeting in April, Trump said he would eliminate the U.S. Department of Education.

For her part, Clinton has proposed a plan to finance college for a majority of American families.

The plan would cover more than 80% of all families, according to Clinton’s campaign website.

As part of her plan, Clinton also would offer a 3-month moratorium on student loan payments to all federal loan borrowers.

RATE SEARCH: Are you saving for college? Check out the savings rates today at Bankrate.com. 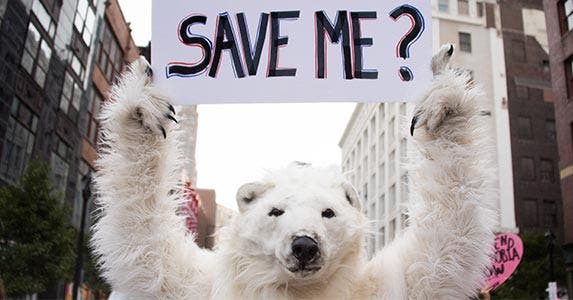 The candidates couldn’t be further apart than they are climate change and energy. Trump has called for expanding domestic production of oil and gas, and has said that hydraulic fracturing “will lead to American energy independence.”

If elected, he pledges to immediately approve the Keystone XL pipeline, a project that would have delivered hundreds of thousands of barrels of oil daily from Canada to U.S. refineries, according to the Council on Foreign Relations.

Trump says he does not believe that climate change is a significant environmental challenge. “I consider climate change to be not one of our big problems,” he said in September.

Trump says he would make cuts at the Environmental Protection Agency and would seek to revise the multinational climate accord.

In her platform, Clinton says she will work to reduce greenhouse gas emissions by up to 30% in 2025 compared with 2005 levels, generate enough renewable energy to power every home in America with a half-billion solar panels installed by the end of her first term and cut billions of tax subsidies for oil and gas companies.

“I won’t let anyone take us backward, deny our economy the benefits of harnessing a clean energy future or force our children to endure the catastrophe that would result from unchecked climate change,” she said last year.

RATE SEARCH: Looking to add solar panels to your house? Check out the home equity rates today at Bankrate.com. 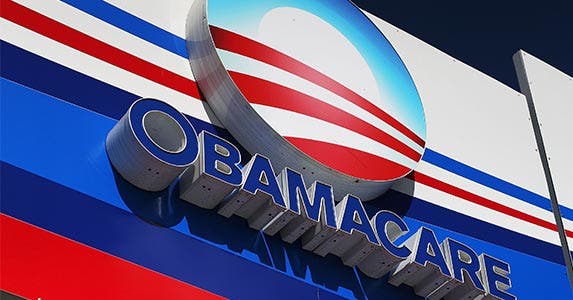 Though Donald Trump does not follow the Republican Party in lock step on all issues, he does agree with the party on the Affordable Care Act.

Trump released a policy statement in March on Obamacare. “This legislation … has tragically but predictably resulted in runaway costs, websites that don’t work, greater rationing of care, higher premiums, less competition and fewer choices,” he says.

Trump proposes that Americans be able to purchase health insurance across state lines and says that Medicaid should become a block-grant program.

On the other hand, Clinton says she will defend and expand the Affordable Care Act. She says she will build on it by making possible a “public option,” or a government-run health insurance agency to compete with private companies.

She supports letting people over 55 years old buy into Medicare. 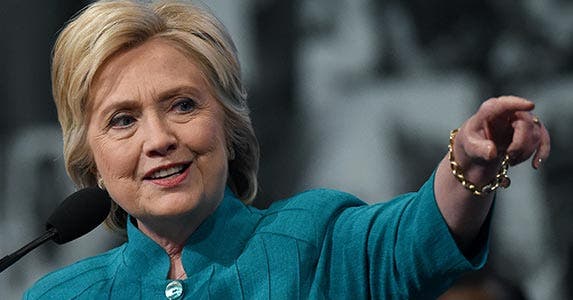 Trump would dismantle the Dodd-Frank financial reform law, the law passed in 2010 to regulate Wall Street and the banking industry after the Great Recession.

He called the law a “disaster” and a “very negative force,” according to the website PolitiFact.com. He has said he would “get rid of it,” “repeal it” or “roll it back.”

One entity created by Dodd-Frank, the Consumer Financial Protection Bureau, celebrated its 5-year anniversary last week. The GOP would eliminate it.

In almost contradictory fashion, Trump asked that reinstatement of the Glass-Steagall Act be added to the GOP platform. Glass-Steagall separated commercial banking from securities services.

While Clinton’s platform doesn’t mention Dodd-Frank, it does call for imposing a “risk fee” on the largest financial institutions based on their size and their risk of contributing to another crisis.

She also would close loopholes not covered by the Volcker Rule, a rule that restricts U. S. banks from making certain kinds of speculative investments that don’t benefit their customers.

Under current law, banks still can invest billions through hedge funds, which are exempt from the rule. Clinton says she would close that loophole.