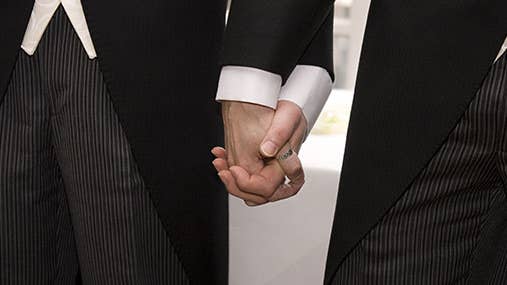 Editor’s note: A key provision of DOMA was struck down June 26, 2013. In a 5-4 ruling, the Supreme Court said “DOMA is unconstitutional as a deprivation of the equal liberty of persons that is protected by the Fifth Amendment.” As a result of this ruling, marriages between gay couples will now be recognized by the federal government. This will allow same-sex married couples access to joint federal benefits such as Social Security and Medicare, as well as the ability to file jointly on their federal taxes. However, for those states that do not recognize same-sex marriage, couples in those states will still need to file state taxes separately.

Most couples probably don’t give a lot of thought to the financial benefits of being legally married, but Adam Woods and his partner do.

Woods, 33, a behavior therapist from West Hollywood, Calif., saw his 2008 marriage to his partner of 10 years called into question by the passage of an amendment to the state constitution banning gay marriage in California. This month, the Supreme Court will rule on two cases challenging that amendment and the federal Defense of Marriage Act, or DOMA, which prohibits the federal government from recognizing same-sex marriages.

United States v. Windsor, the case that could overturn DOMA, originated in New York, where Thea Clara Spyer died, leaving her estate to her spouse, Edith Windsor. Under DOMA, Windsor was denied a spousal deduction on her federal estate taxes, costing her more than $360,000.

Windsor sued to recover those taxes, but Stephen Wermiel, a fellow in law and government at American University in Washington, D.C., says the case also addresses a larger issue of “whether the federal government is violating the Constitution by not recognizing the valid same-sex marriages that are recognized under state law and denying benefits to those marriages.”

Based on the oral arguments, it seems there is a good chance the court will strike down DOMA for one of two reasons: The court could rule that DOMA infringes on states’ rights to define marriage within their borders or that it violates the Equal Protection Clause of the Fifth Amendment, which prohibits the federal government from singling out a particular group for unfair discrimination, says Clifford Davidson, an attorney at Sussman Shank LLP in Portland, Ore., and a member of the lesbian, gay, bisexual and transgender, or LGBT, Litigators Subcommittee of the Litigation Section of the American Bar Association.

“If it were just sort of straight-up equal-protection grounds, it would probably be 5-4, with (Justice Anthony) Kennedy as the deciding vote,” Davidson says. “They asked a lot of questions about the federalism implications — the federal government basically impeding the states’ ability to define marriage and regulate it — and so there’s that other ground that may have an appeal to some of the conservative justices.”

In addition to those gay couples who are currently or will soon be allowed to marry in 12 states and the District of Columbia, about 18,000 gay and lesbian couples in California got married before voters there overturned a state Supreme Court decision that had established that right. If the Supreme Court strikes down the 1996 law, same-sex spouses in those jurisdictions would be eligible to receive federal benefits.

The second case before the court — Hollingsworth v. Perry — challenges California’s Proposition 8. It doesn’t seem as likely to end in a victory for gay rights activists.

The case began when two gay couples attempted to get marriage licenses in 2009. Denied, the couples filed suit in federal court, alleging the amendment violates the Equal Protection and Due Process clauses of the 14th Amendment. That amendment basically applied the Fifth Amendment’s prohibition on unfairly targeting individual groups to state law.

The other argument in the Proposition 8 case is that the defendants, Dennis Hollingsworth and other members of a group called ProtectMarriage.com, which had helped campaign for Proposition 8, don’t have what’s called “standing” to take the other side of the case. In legal terms, “standing” means having a stake in the case that’s substantial enough to argue one side or the other before the court. To have standing, you have to be able to show you will be harmed in some way by a government action — in this case, striking down the law — and the plaintiffs argue that Hollingsworth and ProtectMarriage.com don’t. 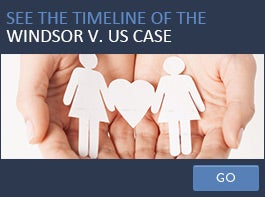 While similar, the case may be a harder sell for the plaintiffs than the Windsor case, in part because the justices seem reluctant to intervene in what’s traditionally been a state matter, Davidson says.

“They certainly seemed unenthusiastic about deciding the case on its merits, and they seemed to be wrestling quite a bit with the standing issue,” Davidson says.

Wermiel agrees. He thinks it’s unlikely the result will be a sweeping verdict, staking out a constitutional right to same-sex marriage. The court’s verdict might be narrower, focusing on arcane legal matters, or may simply allow the lower court’s decision to stand.

Money on the line for same-sex couples

For Woods, the financial stakes are high. Lack of legal recognition for his marriage has, at different times, cost him the opportunity to get affordable health insurance through his partner’s employer and to file a joint tax return, and could cost him far more in retirement, he says.

“When people marry and say ‘I do,’ there are implied rights and responsibilities,” she says.

To be sure, there are about 1,140 rights that come with a federally recognized marriage, she says. For instance, you might not think of a divorce through the court system as much of a financial benefit, but the alternative — a disorderly, ad hoc splitting up of a couple’s shared assets — can be much worse, Neiman says.

Then there are the legal fees involved in trying to create a web of documents to approximate the legal rights that heterosexual couples take for granted such as being able to visit a sick partner or have custody rights to a child should a couple be separated through divorce or death.

For Woods, those fees have become so numerous over time that he’s lost count. That’s one reason he’ll be keeping a close eye on the Supreme Court’s verdicts.

“I don’t think my family is any different than anyone else’s,” Woods says. “I just want to have what my parents have and what my grandparents had. It’s nothing special or new, but without it, couples and families lack security and definition.”