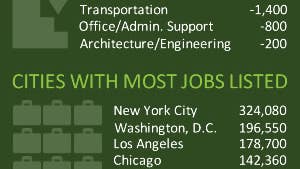 Managing to find a job will be easier if you’re a manager, according to the latest employment ad survey from The Conference Board.

But as the nation heads into Labor Day, the traditional holiday for honoring the American worker, the odds of finding work appear to have declined last month. The Conference Board’s survey of help wanted online ads found that the number of positions advertised dropped by 57,100 in August from July, falling to 4.23 million from 4.29 million.

The August slump in help wanted ads was a stark contrast to the gain of 139,200 in July. And analysts said it revealed just how bumpy the jobless recovery is for people on the unemployment rolls.

June Shelp, vice president of The Conference Board, a New York business research organization, agreed. “During the last few months, gains in online job demand one month have been partially offset by dips in the following month,” she says.

Still, Shelp detects some cause for optimism for job seekers this Labor Day, saying that “the good news is that overall job demand is still maintaining a modest upward trend for both the nation and most states.” Despite the decline, for instance, the August figure remains well above every month for 2009, and tops every month of 2010 except for July.

Nationally, for every available job there are 3.4 unemployed people looking for one, The Conference Board says. But the survey also found that your success in finding a job will be heavily influenced by what you do, and where you live.

Online ads for management positions, for instance, grew by 8,300 last month. The relatively robust demand for white-collar workers reflects the uneven nature of the recovery, says Heidi Shierholz, an economist for the Economic Policy Institute in Washington. “We know they’re not hiring across the board, and we know they’re not investing,” she says.

Management ads had also surged by 40,200 in July, and they now stand at their highest level since January 2008.

Surprisingly, for some occupations a declining number of ads don’t necessarily reflect low demand. For instance, the broad category of health care practitioners and technical occupations had 31,500 fewer advertised positions in August. But The Conference Board noted that jobs in this category, which tend to require a high amount of training and offer high salaries, are actually going begging: In July, there were more than two vacancies for every unemployed worker in this field.

Similarly, computer and mathematical science fields saw a 31,800 drop in ads last month. But the latest figures show demand dwarfs available workers by a ratio of 3-to-1.

Regionally, job seekers might be advised to go West — and Midwest. Those regions saw slim gains in online help wanted ads in August. But the Northeast and South saw declines.

Nevertheless, two of the strongest gains were in the southern states of Texas, where job listings rose 8,000, and Florida, up 7,800.

The best strategy for a post-Labor Day search for work? Network, advises Challenger. “You can send a dozen resumes a day, but companies are inundated with resumes,” he says. “Get involved so you’re engaged and meeting people who can walk you into places. Find your way in the back door, where it’s not so crowded.”