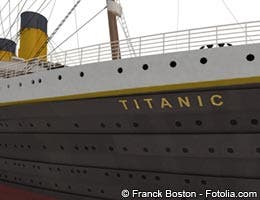 The story: Love trumps finances and social standing when a boy from the wrong side of the tracks wins a ticket on the maiden voyage of the doomed luxury liner. Along the way, he also wins the love of the girl of his dreams, who happens to come from old money (though most of it has been spent). They never get the opportunity to argue about his penchant for gambling or her love of jewelry and the finer things, as he dies in the aftermath of the shipwreck.

Had Jack survived, he and Rose would have needed to get on the same page financially if that relationship was going to have a chance.

“It definitely has to be discussed before they marry,” says David Bendix, CPA/CFP, president of The Bendix Financial Group in Garden City, N.Y. Along with setting some common goals, they should also talk about their money habits — “how they could learn to save and spend wisely.” That’s because money is one of the main reasons couples split up, he says.

The takeaway: If you want the relationship to survive, you might both be better off if you are open with your financial footing and share — especially when it comes to floating furniture.