Chelsea Raley’s debt hinders her ability to save for emergencies, and working so much keeps her from enjoying life the way she would like.

Chelsea Raley, 28, is a business analyst in Columbia, South Carolina. She is a homeowner with an accounting degree and an MBA who works 2 — and sometimes 3 — jobs to pay off debt. In addition to a mortgage, she has student loans, credit card balances, some medical debt and virtually no emergency savings. Bankrate selected her to win the 3rd quarter Money Makeover grand prize of $10,000.

Do you have a big goal for your life? Enter to win the next $10,000 Money Makeover contest.

Chelsea says she feels like she’s paying credit cards over and over and wants to pay down her student loans. Ultimately, she wants to work less and enjoy life, maybe even take a vacation. In addition, she’s hoping the Money Makeover will “shine a light” on her finances and tell her what she’s doing right and in what areas she needs to improve.

In addition to her day job, Chelsea puts in another 20 hours per week at a 2nd job. Last holiday season she even worked a 3rd job and may do so again this year. She sticks to a budget and tracks her income and expenses meticulously, with the monthly surplus of about $1,000 going toward paying off credit card debt.

Chelsea bought a single-family home out of foreclosure 2 1/2 years ago for $66,500. She’s done a lot of work on it, and values it at $120,000 currently. She says there is still more work to do, but with a $62,000 mortgage balance, she has plenty of equity. Her current 4.75% mortgage rate is one that she can improve on in the current environment.

An accounting of amounts owed

She has $500 in remaining medical debt that is scheduled to be paid off by November. There is no interest being charged and she is paying the provider directly.

As far as credit card debt is concerned, there are 2 cards with balances — a Visa card with a $3,400 balance at 14.9% and a Lowe’s card she’s been using for home improvement projects. The Lowe’s card has a $2,800 balance, all currently under a 0% same-as-cash offer. Each purchase carries its own timetable for repayment under the same-as-cash agreement. There is a $600 balance due in December, $300 due in October 2017 and $1,900 due in December 2017. Any balance not paid by the respective due date begins to incur interest at 24.99%. The minimum monthly payment on the card is currently $29.

Strategy to pay off debt

Chelsea had been applying her monthly surplus of $1,000 toward the Visa card, then switched some focus to the Lowe’s card to make sure the required balances get paid off by the end of the same-as-cash period. Most recently she has been paying $550 per month on the Visa and $460 on the Lowe’s card.

Starting in January 2017, she wants to attack the student loan debt because her credit card debt will be paid off.

As far as emergency savings, she has less than $400 set aside in 2 low-yielding accounts, with most of it earmarked for taxes.

Chelsea’s retirement savings consists of an $18,000 401(k) balance spread across 6 different investment options. She is contributing 6% of her pay, enough to maximize the 3% employer match. She also opened a no-fee Roth IRA at one point, but it contains only her uninvested original contribution of $30.

She opened a taxable investment account a couple of years ago with $200, but hasn’t contributed since. Holdings are spread among a cash account and 4 stocks, with the dividends automatically reinvested.

The financial instincts are there. She is maximizing the 401(k) employer match. She owns a home and had a great eye for value when she bought it. She has invested in her education. And she even opened a Roth IRA when she had the chance. Now it is just a matter of putting her on a plan that removes some of the immediate obstacles so she can continue progressing on life’s financial journey.

The No. 1 culprit in producing credit card debt is a lack of emergency savings. This makes it difficult for people trying to get out of debt because the slightest unplanned expense ends up going on a credit card in lieu of any savings to absorb it. 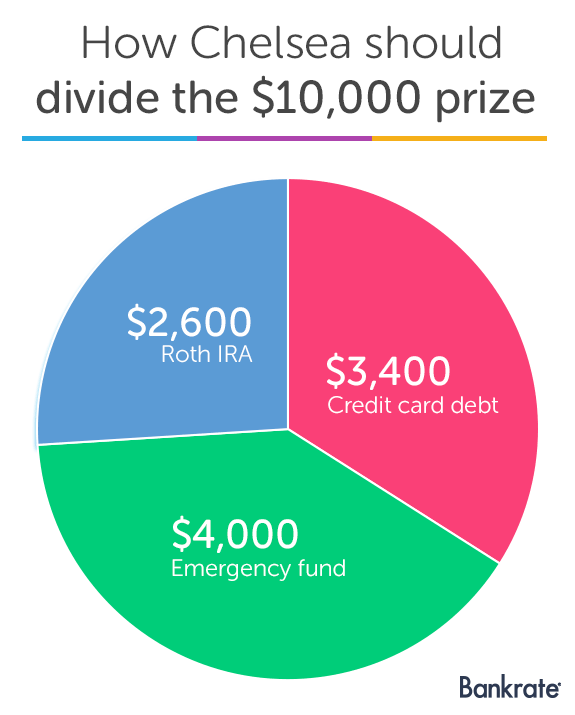 Although Chelsea has been hammering away at her debt, there is little in the way of a savings cushion. Rather than prioritizing debt repayment first, and then emergency savings and retirement savings sequentially after that, it is important to attack all 3 objectives simultaneously.

With her $10,000 contest winnings, Chelsea should:

What to do with the grand prize

Once she pays off the Visa card and the $600 Lowe’s balance due by December, Chelsea can redeploy her $1,000 monthly surplus. She should use half of it, $500 per month, to build the emergency savings by increasing the automatic contributions. The ultimate goal is to have enough to cover 6 months’ of expenses.

With the other half, she should set up regular $500 monthly contributions to the Roth IRA with the goal of maxing out the full $5,500 each year. The deadline is April 15 of each year to make the previous year’s contributions, so designate the contributions made between now and then for the 2016 tax year. A target-date retirement fund is a fine all-in-one investment solution for this account.

It is important for Chelsea to stay on track toward paying off the remaining Lowe’s card balances by the end of their respective 0% timeframes. Her current monthly payments will retire the $600 December balance in time. But by adding $500 per month to her emergency savings, she’ll be able to make the full payments on the 2 balances due in 2017 and maximize the 0% same-as-cash period by having her money working for her in the interim.

RATE SEARCH: Make your money work for you in a high-yielding savings account. Compare rates at Bankrate.com today!

Although Chelsea, like many millennials, wants to focus on paying off student loan debt, it can wait. She should take advantage of the income-based repayment program she’s currently on to pay off the other debts, build emergency and retirement savings, and not have to finance home improvement projects. All of her student loan debt is federal, so in addition to income-based repayment, she has the potential for tax deductibility of the interest and favorable features such as deferment or forbearance in the event of financial difficulty. No other obligation is so flexible.

Chelsea should reallocate her 401(k), by consolidating the investment balances and ongoing contributions into the target-date fund. The target-date retirement fund serves well as an all-in-one solution. The additional holdings she currently has result in an overlap in international stocks, domestic stocks and bonds, with a particularly significant overallocation to midsize company stocks.

She should also consider refinancing her mortgage because current rates are a full percentage point or more below her rate. The small balance means she’ll have to carefully compare the costs of refinancing to make sure they can be more than recouped with the interest savings.

Now for the big question: When can Chelsea drop the 2nd job and start enjoying life? Depending on her tax bill next spring, by April 2017 she will have gotten to the point where her credit card debt is paid off, she’s fully funded her 2016 Roth IRA contribution, and has 2-3 months’ worth of expenses tucked away for an emergency — even after accounting for the remaining 0% balances on the Lowe’s card.

If she left her 2nd job, her monthly surplus would still be about $600, which is enough to fully fund her annual Roth IRA contribution and still make regular contributions toward savings. Any forthcoming pay raises can be used to increase the amount she’s deferring into her 401(k). Barring any big house expenses, she should have ample leeway to scale back her work schedule by next spring.

And next summer she may well find herself on the beach somewhere enjoying a long overdue vacation.