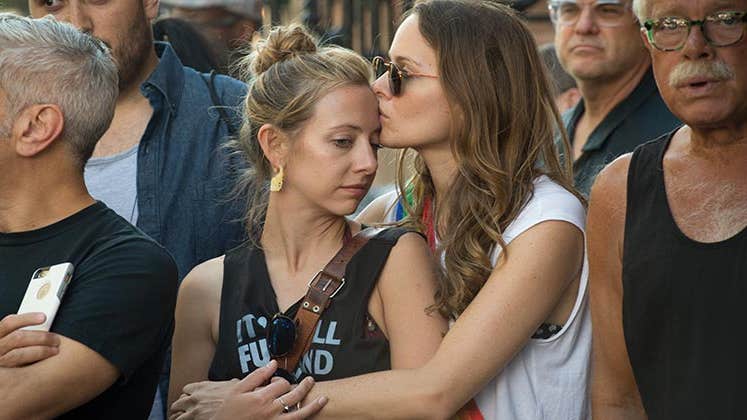 People hug during a vigil in New York for the victims of the mass shooting at a gay nightclub in Orlando, Florida.

In the wake of the deadliest mass shooting in U.S. history, people are flocking to the internet, eager to help the victims and their families any way they can. Online fundraising campaigns began popping up shortly after the massacre at a gay nightclub in Orlando, Florida, and Equality Florida — the largest LGBT group in the state — drew over $1 million in donations in just one day through a GoFundMe page.

But while times of crisis often bring out the best in people, they also provide scammers the perfect opportunity to prey on emotions.

“We are already hearing about click-bait schemes and questionable solicitations, and we expect there will be numerous scams and frauds,” says H. Art Taylor, president and CEO of the Better Business Bureau’s BBB Wise Giving Alliance, in a news release. “We urge those generous donors to give wisely so their gifts can do the most good.”

Before you donate your hard-earned money, follow these tips to confirm the charity you are donating to is indeed legitimate and not a charity scam.

Following any tragedy or disaster, a slew of new charities will crop up to aid victims. While many are legitimate, others are charity scams. Fake charities requesting donations through websites and social media surfaced immediately after the 9/11 terrorist attacks in 2001, the Haitian earthquake in 2010, the Ebola epidemic and last year’s earthquake in Nepal.

“There’s always going to be unscrupulous people that try to get in the middle of the flow of money to charities,” says Sandra Miniutti, a vice president with Charity Navigator in Glen Rock, New Jersey. “Making sure it’s an actual charity still doesn’t mean they are going to do great things, but at least you know it’s not an individual walking away with your money.”

An easy way to confirm a charity is legitimate is to see if it’s listed as a tax-exempt organization on the IRS website, says Bennett Weiner, chief operating officer of the BBB Wise Giving Alliance. The tax agency’s Exempt Organizations Select Check tool allows you to search an online directory to learn a charity’s status.

Keep in mind that churches don’t have to formally apply for tax-exempt status with the IRS, so they may not be listed in the directory, Weiner says. The BBB Wise Giving alliance also notes that some organizations collecting money to help with the Orlando tragedy are not tax-exempt.

The alliance has a search engine on its website where donors can look up charities, plus it points out that 40 states require charities to register with a state government agency before they solicit for charitable gifts. If a charity is not registered, that might be a significant red flag.

Be wary of unsolicited requests for donation

Whether it’s a person standing outside a store with a jar or an email asking you to click on a link to donate, experts say you should be wary of any unsolicited requests for donations. “Emails that claim to link to a well-known relief group may end up being a phishing activity designed to steal personal information,” says Weiner.

Phishing is a type of online identity theft. It uses email and fraudulent websites to steal your personal data such as credit card numbers, passwords or account data. The best thing to do is to go directly to the charity instead of linking to it from an email or text message.

“When Hurricane Katrina happened, the FBI reported roughly 4,000 bogus websites stealing people’s information and/or their money, and that may happen again,” says Miniutti.

She says social media raised the stakes for charity scams because it’s hard to confirm what’s behind a Facebook message or Twitter feed. “It’s easy to create a fake website that looks like a legitimate charity,” Miniutti says.

Sure, we would all love to see 100% of a donation go to aid the victims of a calamity, but the reality is that charities have operating costs like any other business. Weiner says consumers should be skeptical of any charity that claims the entire donation is going to the victims. “After every disaster, some charity makes that claim,” says Weiner, noting that even credit card donations have some form of processing fees.

If you’re worried your gift will go more toward the charity’s general operating fund instead of the crisis at hand, CharityNavigator.org advises you to request exactly how you would like your gift to be used, by either checking a box on the charity’s online giving portal or writing a note in the memo section of a contribution check.

The BBB Giving Alliance also recommends watching out for vague requests that don’t identify the intended use of funds, and check to see if the appeal identifies when the collected funds will be used.

Avoid charities that are pushing a hard sell

While it’s a charity’s mission to solicit people for donations, any charity that puts excessive pressure on you to donate or demands an on-the-spot gift, especially a cash one, should raise alarm bells, Weiner says. It might be a charity scam. Legitimate charities give you the time to go to their website or research what they are trying to do before you make a donation.

Consumers also need to be mindful of telephone solicitations that appeal to your emotions but don’t tell you what the charity is actually trying to accomplish. In that case, take down the name of the organization and check its legitimacy before making a donation.

“Give with your head not just your heart,” Weiner says.