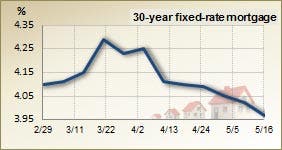 Mortgage rates dipped again, for the sixth week in a row, pushing the rate on the most common type of mortgage below 4 percent for the first time in the history of Bankrate’s survey.

The benchmark 30-year fixed-rate mortgage fell to 3.97 percent, compared to 4.02 percent the previous week, according to the Bankrate.com national survey of large lenders. The mortgages in this week’s survey had an average total of 0.44 discount and origination points. One year ago, the mortgage index was 4.77 percent; four weeks ago, it was 4.1 percent.

That’s the lowest the 15-year rate has reached since Bankrate started the weekly survey.

Results of Bankrate.com’s May 16, 2012, weekly national survey of large lenders and the effect on monthly payments for a $165,000 loan:

Mortgage professionals say they are shocked by the low levels mortgage rates reached in the last few weeks and also how long these rock-bottom rates have lasted.

“I’m very surprised,” says John Stearns, a mortgage banker at American Fidelity Mortgage Services in Mequon, Wis. “But look at all the stuff going on in Europe. It’s certainly not pretty over there.”

As political chaos unfolds in Greece, investors fear the country will be forced out of the eurozone. Amid the uncertainty, these investors are seeking safety in U.S. Treasury bonds. The yield on the 10-year Treasury note reached 1.75 percent Tuesday, the lowest level since October. Mortgage rates tend to follow the Treasury yield’s direction.

“A flare-up of the sovereign debt troubles in Europe once again led investors to flee to the safety of U.S. Treasury securities last week,” says Michael Fratantoni, MBA’s vice president of single-family research and policy development.

How much lower can rates go?

“If there’s enough fear in the market, I can see that happening, he says.”

“I think rates will remain low for the foreseeable future,” says Bob Walters, chief economist at Quicken Loans. “The caveat to that is that surprises are inevitable, and when rates begin to move higher, it’s entirely likely that they could move higher quickly.”

Homeowners seeking to refinance at these record-low rates have kept lenders busy.

The volume of mortgage applications increased 9.2 percent last week, compared to the previous week, according to the Mortgage Bankers Association weekly survey. About 74.9 percent of those applications came from refinancers.

“When rates dip like this, it’s a different world out there,” Becker says. The low rates attract not only borrowers who planned to refinance but also borrowers who weren’t sure they would benefit from a refinance because their rates already are low.

Does it make sense to refi now?

Even borrowers who have a mortgage rate of 4.5 percent, which is considered low already, could save by refinancing these days, Becker says.

For those who have smaller mortgages of $100,000 or less, refinancing doesn’t always make sense because of the closing costs of the loan, Becker says. But borrowers who owe more than $200,000 are likely to save.

“Make it simple: If you have a $300,000 loan and you reduce your rate by 1 (percentage point), you’re saving about $3,000 in one year. That pretty much covers your closing costs,” he says. “Crunch the numbers, and see if it makes sense for you.”

Many borrowers have been using today’s low rates to pay off their mortgages earlier, Stearns says.

“With rates so low, I’m seeing a lot of term reduction, people jumping at 15- to 20-year terms,” he says. “It’s a great option for those who qualify.”