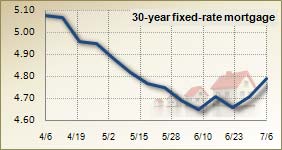 Mortgage rates rose this week as investors kept their eyes on Europe’s financial woes and worried about how the United States will deal with its own debt issues.

The benchmark 30-year fixed-rate mortgage went up 8 basis points this week, to 4.79 percent, according to the Bankrate.com national survey of large lenders. A basis point is one-hundredth of 1 percentage point. The mortgages in this week’s survey had an average total of 0.32 discount and origination points. One year ago, the mortgage index was 4.74 percent; four weeks ago, it was 4.65 percent.

Results of Bankrate.com’s July 6, 2011, weekly national survey of large lenders and the effect on monthly payments for a $165,000 loan:

Mortgage rates have reached their equilibrium level for now, but don’t expect this to last, says Bob Walters, chief economist for Quicken Loans.

“Anybody who is looking at getting a mortgage should know they are looking at a time of increased volatility,” Walters says. “Which means rates will move higher or lower with greater degree than in normal periods.”

A key factor expected to affect rates this week and early next week is the monthly jobs report that the U.S. Department of Labor will release Friday. A strong employment report normally boosts investors’ confidence and translates into higher rates.

When the May report was released last month, it showed a much smaller gain in jobs than economists had expected, and mortgage rates immediately fell. That could happen again this week if the numbers disappoint.

Another major concern that could have a significant impact on mortgage rates is whether Congress will reach an agreement to raise the country’s $14.3 trillion debt ceiling by the Aug. 2 deadline.

“Do I think the (United States) will default on their debt? No. But if they don’t start making substantial progress soon we should look for interest rates to start to moving higher,” Walters says. “And that could happen before Aug. 2.”

Rob Nunziata of FBC Mortgage in Orlando, Fla., agrees. “I think it will get worked out prior to that,” he says. “But if not, it would have major implications in the mortgage market.”

Helping offset some of that upward pressure on rates are Europe’s debt woes.

This week, Moody’s downgraded Portugal’s debt to “junk” status. Investors took that as another sign that Europe’s debt crisis is far from over and still poses a threat to the global economy.

“You have all these countries getting downgraded,” says Brett Sinnott, director of secondary marketing at CMG Mortgage in San Ramon, Calif. “That helps our mortgage market in the U.S. For people looking to buy Treasury bonds, America is still one of the few safe options.”

Lock now and make sure you have proof

But with so much uncertainty in the market, the safe and wise move is to lock in a rate and when you do, make sure you have proof.

“Let’s say the loan officer you are talking to says they are going to lock you, but they forgot or they got busy,” Nunziata says. “They might have locked you verbally, but if rates spike they will tell you they can no longer honor that rate.”

Also, make sure you provide all the documentation needed to close on time.

“If rates rise and your lock expires, they probably are not going to extend your rate,” he says.