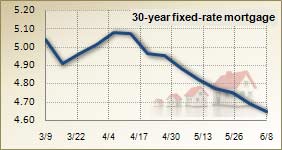 The benchmark 30-year fixed-rate mortgage fell 4 basis points this week, to 4.65 percent, according to the Bankrate.com national survey of large lenders. A basis point is one-hundredth of 1 percentage point. The mortgages in this week’s survey had an average total of 0.39 discount and origination points. One year ago, the mortgage index was 4.88 percent; four weeks ago, it was 4.82 percent.

The 30-year fixed rate has declined for nine weeks in a row and has not been this low since November, according to Bankrate’s survey.

Results of Bankrate.com’s June 8, 2011, weekly national survey of large lenders and the effect on monthly payments for a $165,000 loan:

Some mortgage experts had not expected another dip in rates this week, but their expectations quickly changed after Federal Reserve Chairman Ben Bernanke offered a gloomy assessment of the U.S. economy during a speech Tuesday.

Most people already knew that based on recent economic reports. Still, Bernanke’s speech immediately affected the mortgage market, causing stocks to fall as some investors pulled out of the stock market and sought safety by investing in U.S. bonds, says Michael Becker of Happy Mortgage in Lutherville, Md.

Early in the week, “it looked like rates were going to rise or stay the same,” Becker says. “It’s funny how much his words can move the market more than any type of report can.”

Only 54,000 jobs were added to the economy in May, the fewest in eight months and a far cry from the more than 190,000 jobs that were created in each of the three previous months, according the U.S. Department of Labor. The unemployment rate reached 9.1 percent, up from 9 percent in April.

Even more concerning, according to Bernanke, is that nearly half of the unemployed people have been jobless for more than six months.

“Low home prices and mortgage rates imply that housing is quite affordable by historical standards,” he says. “Yet, with underwriting standards for home mortgages having tightened considerably, many potential homebuyers are unable to qualify for loans. Uncertainties about job prospects and the future course of house prices have also deterred potential buyers.”

“It’s been a really bizarre week,” he says. “On average, last month, rates changed every four hours and 19 minutes,” Green says. “So far this month they are changing every three hours.”

Unlike some mortgage experts who say rates will start rising again soon, Green expects rates will continue to decline “until there is explicit reason” to stop the fall. But he advises borrowers to take advantage of the low rates while they are available.

“When they start shooting up they go up very quickly,” Holloway says.