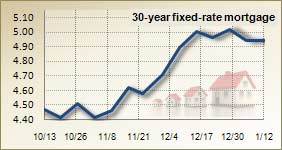 Mortgage interest rates remained nearly unchanged this week, despite a significant gain in U.S. jobs, a status quo that might have left some borrowers wondering why.

The benchmark 30-year fixed-rate mortgage remained unchanged, at 4.94 percent, according to the Bankrate.com national survey of large lenders. The mortgages in the survey had an average total of 0.38 discount and origination points. A year ago, the mortgage index was 5.23 percent. Four weeks ago, it was 5 percent.

One explanation for the lack of movement is that bond traders “oversold” those rate-sensitive instruments in December, when the Federal Reserve launched its second round of quantitative easing, known as QE2, suggests John Walsh, president of Total Mortgage Services in Milford, Conn.

That bond-selling spree pushed prices down and yields (i.e., rates) up, but only temporarily. Now, Walsh says, “some reality is coming back into the market.” The result has been a drop, followed by a steady state.

Employment: up or blip?

Currently, the outlook for higher or lower rates depends on the tension between an economic recovery and a double-dip recession.

In the past week, the weight was on recovery, judging by some upbeat jobs reports. Payroll processor Automatic Data Processing, or ADP, estimated that private-sector employment expanded by 297,000 positions in December, a surprisingly strong and significant gain. A few days later, the Bureau of Labor Statistics reported that the U.S. unemployment rate dropped to 9.4 percent in December, a figure that represents 14.5 million job-seekers.

Yet interest rates stayed flat, perhaps because bond traders were unconvinced or unimpressed by one month’s numbers, thus holding a lid over rates rising.

“We still have high unemployment,” Walsh says. “Next month, (the labor market) could give back everything (it’s gained) and then some.”

Workers may have taken jobs to afford wintertime expenses, such as holiday gifts, higher heating bills and kids’ warmer clothes, suggests Don Frommeyer, senior vice president of Amtrust Mortgage Funding in suburban Indianapolis. Once the financial pressure eases, spending may slow, putting those new hires back on the jobless rolls and undoing the uptick in employment.

Many borrowers aren’t happy with interest rates that are a bit higher, though still at near-historical lows. Inspired by the dip, the more patient borrowers await a dive, though brokers say truly lower rates may not be in the pool.

“There’s no QE3 or other thing on the horizon that’s going to decrease rates,” Walsh says, “so I believe this could be the last opportunity.”