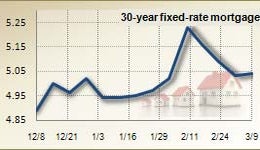 Mortgage interest rates barely changed this week as investors kept one eye on the U.S. economy and the other on the Federal Reserve.

The benchmark 30-year fixed-rate mortgage rose 1 basis point this week, to 5.04 percent, according to the Bankrate.com national survey of large lenders. A basis point is one-hundredth of 1 percentage point. The mortgages in this week’s survey had an average total of 0.42 discount and origination points. One year ago, the mortgage index was 5.08 percent; four weeks ago, it was 5.23 percent.

Mortgage rates always fluctuate, but they’ve been especially volatile in March and are today approximately one-eighth to one-quarter percentage point lower, on average, than they were one month ago.

Results of Bankrate.com’s March 9, 2011, weekly national survey of large lenders and the effect on monthly payments for a $165,000 loan:

The state of the economy, measured by such statistics as the national unemployment rate, retail sales and manufacturing output, is part of the equation. But Brett Sinnott, director of secondary marketing at CMG Mortgage in San Ramon, Calif., says mortgage industry insiders like himself are watching the 10-year Treasury, stock market and rising commodity prices to figure out what’s happening.

At the moment, the million-dollar question is whether the Fed will continue its program of buying U.S. Treasuries to keep interest rates artificially low while the federal funds rate is near zero. The second round of quantitative easing, known as “QE2,” has been controversial, though it’s enjoyed strong support from the Federal Open Market Committee.

That consensus may be weakening, Sinnott says, judging by recent remarks of Richard Fisher, CEO of the Federal Reserve Bank of Dallas.

In a March 7 speech by Fisher titled “Churchill, Baruch, Lindsay Lohan, Congress and the Fed,” at an international bankers conference, he expressed his intention to vote against any extension or enlargement of the program and said that he will vote to “curtail or perhaps discontinue” it prior to the target end date in June if it “should prove demonstrably counterproductive.”

One vote doesn’t make for a turnabout in Fed policy. Still, Sinnott suggests that Fisher’s statements might hint at a longer-term change in direction if economic conditions continue to improve. That could mean higher rates for home-loan borrowers in the future.

Investors, perhaps leery of what the Fed might do next, are “fleeing” Treasuries and U.S. dollars, Sinnott says, in favor of other investments. Any exodus from the bond market in particular can affect mortgage rates because lower demand leads to lower prices and inversely, higher yields or rates.

“Luckily, the European central banks are still buying Treasuries,” Sinnott says, “so the 10-year is relatively in the same range. But with so few private buyers interested in Treasuries, it makes you wonder what’s going on. If (the Fed) pulls out of their buying program, does that mean the Treasury shoots down to 4 percent, or does it stay flat because private investors will step back in?”

The only answer so far to that all-important question is that investors and home-loan borrowers must wait and see.