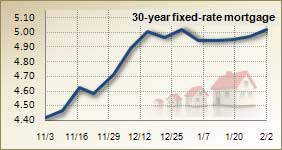 Mortgage interest rates did not move much from their previous level this week as the strengthening U.S. stock market, climbing oil prices and concerns about civil unrest in Egypt applied upward and downward pressure on home loans, seemingly in equal measure.

The benchmark 30-year fixed-rate mortgage rose 5 basis points this week, to 5.02 percent, according to the Bankrate.com national survey of large lenders. A basis point is one-hundredth of 1 percentage point. The mortgages in this week’s survey had an average total of 0.4 discount and origination points. One year ago, the mortgage index was 5.15 percent; four weeks ago, it was 4.94 percent.

Results of Bankrate.com’s Feb. 2, 2011, weekly national survey of large lenders and the effect on monthly payments for a $165,000 loan:

Neither the political turmoil nor the economic conditions caused any big ups, huge downs or wild swings in mortgage rates, yet volatility continued to be a constant. Rates shifted frequently, though consistently within the range that has set the upper and lower limits for the past few weeks, according to Alan Rosenbaum, CEO of GuardHill Financial Corp. in New York City.

Commuters surely have noticed higher gas prices at the pump, a result of inflated oil prices, which can push rates up or down — or up and down at the same time.

“As oil (prices) get higher, that creates more inflation around the world and interest rates go up. But when the price of oil goes up, sometimes that causes the stock market to go down, which causes interest rates to go down,” Rosenbaum says.

The extent to which the gradual, yet sustained increase in rates over the last few weeks has spooked borrowers isn’t entirely clear. The volume of loan applications dropped in mid-January on a week-over-week basis, according to the Mortgage Bankers Association. However, those numbers weren’t adjusted for the Martin Luther King Jr. holiday.

Meanwhile, the volume of purchase-money applications fell precipitously compared with a year ago. The MBA’s unadjusted Purchase Index was down 21 percent in the week ending Jan. 28 compared with the prior-year period.

Refis not quite dead

The current level of rates hasn’t deterred or motivated many homebuyers, Rosenbaum says. Rather, those who are in the market are taking advantage of depreciated property values to buy — not so much for investment purposes, but instead, to move to different homes.

Nor have slightly higher rates completely killed refinancing. Borrowers who were well-positioned to obtain a new lower-rate loan last year generally did so then (sometimes more than once), while those who sat out typically weren’t able to refinance due to the value of their home or their financial situation.

“There are people refinancing now who, let’s say, had five- or seven-year adjustables and are coming off of the locked-in period and are now in one-year ARMs,” he says. “They’re starting to lock in long-term fixed-rate mortgages again, going back to the five- or seven-year money.”

Borrowers also are opting for 10-year and 15-year loans as an alternative to a longer term.

“The smaller banks that specialize in mortgages are lending aggressively on the five-, seven-, 10- and 15-year products,” Rosenbaum says. “The 30-year product has lost its luster.”