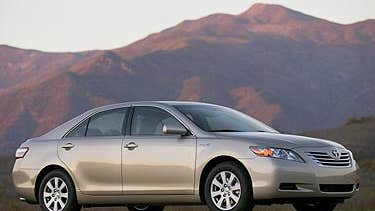 Low prices and higher fuel mileage are the factors driving the new car market so far in 2008 as two Toyotas and two Hondas topped the list of most popular new cars.

“The consumers’ mindset and preferences in the U.S. market have permanently changed,” says Jesse Toprak, executive director of industry analysis for Edmunds Inc. “Consumers are very suspicious of gas prices.”

Vehicle sales are down 10 percent from last year, and buyers who haven’t put off the purchase are going the safe route, says Toprak. “That’s usually seen as smaller, more gas efficient and cheaper — $25,000 or less,” he says.

Consumers are also looking for vehicles and manufacturers with a reputation for quality, plus good resale value, he says. “Price is a huge factor.”

“This is a radical change to the market,” says Jack Nerad, executive market analyst, Kelley Blue Book and KBB.com. “I expect the first five to six months are pretty reflective of what we’ll see the rest of the year,” says Nerad. “At the same time, I’m not convinced this is the brave new world we’ll be in forever and ever.”

The No. 1 seller so far this year is the Toyota Camry. “It’s had a fairly recent redesign and it has a great reputation,” says Paul Taylor, chief economist for the National Automobile Dealers Association, or NADA. The Honda Accord, which ranks second in popularity, is “a brand new design,” says Taylor.

The Honda Civic is in third place, but it broke the all-time sales record for May, just about the time gas hit $4 per gallon.

“Along with the Toyota Corolla, this car’s known for gas mileage and reasonable size for typical American consumers,” says Taylor.

The Corolla comes in fourth. One model, with a 1.8 liter engine, boasts 30 mpg combined, tying with the Chevrolet Cobalt XFE for best mileage of the top 10 for a gasoline-powered nonhybrid.

The country’s two most popular trucks, the Ford F-series (light duty) and the Chevrolet Silverado (light duty) are fifth and seventh in popularity as overall pickup truck sales dropped 22.9 percent over this time last year, according to figures from Edmunds.

“People still need pickups,” says Nerad. That need, “hasn’t all gone away, but it has certainly been tempered more than we’ve seen in a long time.”

Toprak expects truck sales to pick up by November or December, coinciding with the first snow storms, year-end clearance sales, and end of the tax year for many of the small businesses that use pickups. Whether they move up or down in popularity at the end of this year, “they’re still likely to be in the top 10,” he says.

Coming between the trucks at No. 6, the Nissan Altima offers “a combination of space and reasonable gas mileage,” says Taylor.

And finishing out the list at No. 9 and No. 10, the Ford Focus and the Chevrolet Cobalt “both offer strong gas mileage and reasonable space, but not copious space,” says Taylor.

The Focus, which was redesigned last fall, is Ford’s sole entry in the compact market, says Libby.

“The Focus has carved out a niche, along with the Cobalt,” Taylor says.