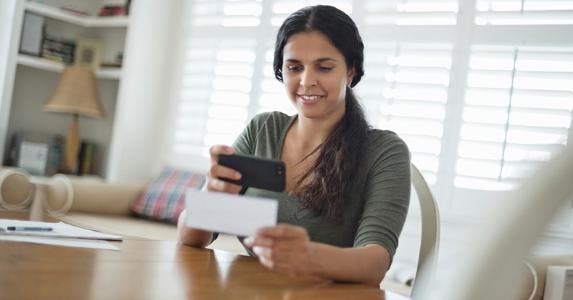 In a snap, you can take a selfie with your pals at happy hour or shoot a photo of your family romping on the beach. Now, you can use your camera-equipped smartphone for a less exciting, but no less important task: paying bills.

Two major banks — U.S. Bank and Bank of the West — have introduced features in their mobile apps that enable customers to snap photos of their paper bills from utilities, credit card companies and mortgage servicers. The payment information is then loaded into the bank’s online bill-paying system. That means no more fat-fingered typing of addresses, account numbers and other payee data on your smartphone.

Bank of the West’s app is called Scan to Pay, while at U.S. Bank it’s dubbed Mobile Photo Bill Pay.

“We know that consumers like the idea of paying their bills through their banks, but setting up the payee is always the big hurdle they’ve had to get over,” says Daniel Steere, director of product management for mobile image capture at Fiserv, developer of the Scan to Pay technology.

In fact, a 2014 Fiserv survey found that 37 percent of consumers indicated technology like Scan to Pay would motivate them to begin paying bills — or pay bills more frequently — via smartphone. The same survey showed that among 65 million Internet-using, smartphone-owning U.S. households, 27 million had paid bills using those phones.

Fiserv says Scan to Pay allows users to set up a bill for payment in 30 seconds. With the technology, details from a bill’s tear-off stub — the part of the bill that you’d stuff into an envelope — automatically pop up in the appropriate data fields on the screen of a mobile device. That information then appears in the customer’s bank-operated system for online bill paying, although users may need to rekey some data if the software reads it incorrectly.

From there, the customer can set up their payment. The big benefit for many people is that they don’t have to manually input a lot of the data from a utility company, credit card company or other payee to get started with online bill pay.

Sarah Clark, vice president of product at Mitek Systems, developer of Mobile Photo Bill Pay, says the technology lets a consumer pay a bill just one time or set up recurring payments — all on a smartphone, tablet or other mobile device.

“Today, many mobile-bill-pay apps offered by banks do not allow adding a new payee via a mobile device,” Clark says.

Steere says photo-bill-pay technology is a “very obvious extension” of other activities we undertake on our mobile devices, such as depositing a check by snapping a picture of it.

This technology erases the frustrating chore of typing bill data on a small smartphone screen, he says. “It’s painful on a laptop. It’s really painful on a mobile phone,” Steere says.

However, some observers doubt the bulk of mobile users will adopt the technology to ease bill-paying pain.

While 4,000 banks and credit unions in the U.S. already offer mobile deposits or are gearing up to do so, Bob Meara doesn’t think mobile bill-paying technology like Fiserv’s and Mitek’s will be as widespread. Meara, senior analyst in the banking practice at research and consulting firm Celent, expects the bill-paying technology to be commonplace only among the country’s 50 largest financial institutions.

For her part, Mitek’s Clark says she thinks that as word of mouth spreads about the benefits of Mobile Photo Bill Pay and similar tools, “we’ll likely see a tipping point where a majority of financial institutions will adopt” this technology.

A couple of factors make mobile bill payments more challenging than mobile deposits, according to Meara. For one, checks come in standard formats, with account numbers and routing numbers showing up in the same spot. By contrast, paper bills don’t have standard formats.

He adds: “I’m not seeing it being a big game-changer.”