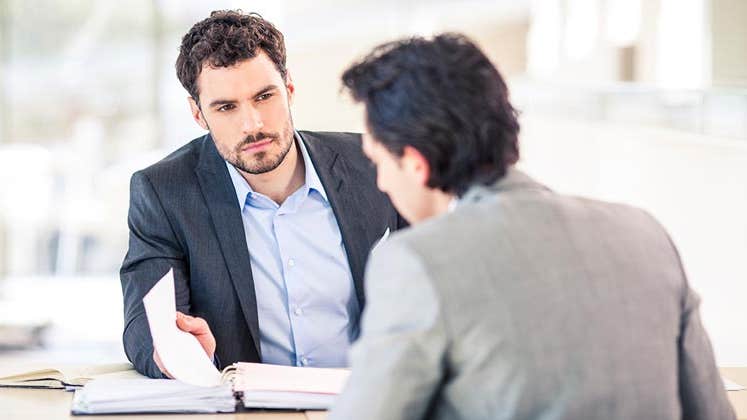 The federal government prohibits employers from making hiring decisions on the basis of race, ethnicity, religion, sex, disability, veteran status, national origin, age, political affiliation and genetic information — meaning that those questions are automatically off the table for employers. Such topics as sexual orientation, gender identity and criminal background information come with different rules, depending on the state. Employers who aren’t trained in correct interview procedures frequently cross the line without knowing it, say the experts.

When asked an awkward question, try to keep your response light and friendly to avoid alienating your prospective boss or sabotaging your chances of landing the job. Here’s how to handle the most common illegal interview questions if you happen to be asked.

Do you have kids?

Questions about pregnancy, children and medical conditions related to giving birth are prohibited under federal law, according to the U.S. Equal Employment Opportunity Commission. Though employers may raise the question to make small talk, it’s wise to keep information about your home life private.

If you do get an illegal interview question, there are three ways to handle it, says Jeffrey Weinstock, an attorney and president of Rhodes & Weinstock LLC, a staffing and placement company in Washington, D.C. Interview candidates can answer it and hope their response doesn’t factor into the employer’s hiring decision. They can refuse to answer it, which may end the interview prematurely. Or, they can take door No. 3.

“Answer the question that you think the interviewer was getting at,” says Weinstock. “If the question is ‘Well, do you have any children at home?’ the interviewer may be trying to find out if there’s an issue with working overtime. You can say, ‘Well, my personal life is not going to preclude me from working any hours required.'”

Didn’t I see you at church last week?

Religion is protected under federal law, so any questions that identify a candidate as belonging to a certain religion or spiritual practice are illegal. That includes those who belong to religions with broad followings such as Hinduism, Christianity, Islam and Judaism, as well as those with smaller followings such as Wicca and Rastafarianism.

Employers can’t ask about your religion directly, but they can ask if interviewees are available to work required work days, even if those days include certain religious holidays, says Mario Bordogna, a labor and employment attorney and partner with Steptoe & Johnson, which is headquartered in Bridgeport , W.Va.

“An employer has the right to reasonably expect that someone is going to be able to … come to work if it involves those types of holidays,” he says.

If asked a question about religion, candidates can simply say, “I prefer to keep my opinions on such things private.”

Do you play any sports?

The boss probably isn’t asking questions such as “Do you play any sports?” to ferret out information on your health, genes or disabilities, but it could be interpreted that way. While it’s legal for employers to ask if you are physically capable of completing job tasks, gathering specific information on your endurance and abilities is a big no-no, says Weinstock.

You have an accent; where are you from?

An interviewer could be asking an icebreaker question — “Where are you from?” — to make the job candidate feel at ease, or he could be digging for something deeper such as a candidate’s fluency in a foreign language or work status.

“Really, they’re asking ‘Can you work legally in the United States, or do we need to get you an H-1B visa?'” says Daniel E. Martin, Ph.D. and associate professor of management at California State University, East Bay in Hayward, Calif.

To counter questions about national origin, Martin suggests redirecting the question to focus more on your ability to fit the company and legal requirements for the job.

“You can say, ‘I’ve been working legally in the United States for a long time. I have all of my materials with me. I’d be happy to share it with your human resources department to get that process going,'” he adds.

Your last name is Park; is that Korean?

The overlap between questions about national origin and those about race and ethnicity is huge.

An employer may be asking about ethnicity in order to increase company diversity, not to discriminate, says Jonathan Segal, an employment attorney and partner with the Employment, Labor, Benefits and Immigration Practice Group at Duane Morris LLP in Philadelphia.

If an ethnicity question does pop up in an interview, Segal recommends addressing it head on by stating “It’s not really something we should be discussing,” and by redirecting the conversation to a more relevant topic such as your strengths, work ethic or ability to fulfill job duties.

Were you honorably discharged?

For many veterans, skills gained while serving in the U.S. armed forces are the very reasons why they may be qualified for a certain job after leaving the military. If education and experience gained on duty are relevant to the job you’re applying for, employers may ask about it. What they can’t ask about is how you were discharged, though they may request that information after you’re hired, reports the Department of Labor.

Chances are, interview questions about the status of a military discharge probably won’t relate to the nature of the job or responsibilities required. If you encounter an off-topic question, Martin recommends using it as an opportunity to move the conversation back to questions you’re more comfortable with.

“If somebody asks you a question that’s vague or strange or kind of irrelevant to the job, you want to take it as an opportunity to highlight your own expertise,” he says.

The Age Discrimination in Employment Act allows employers to include an age limitation in rare circumstances for jobs “where age has been proven to be a bona fide occupational qualification,” such as the Federal Aviation Administration’s rule that prohibits commercial pilots from flying after age 65. The law also allows employers to favor older workers over younger ones because of age, but prohibits them from doing the reverse.

If a question about age pops up, Weinstock advises job candidates to frame the answer to reflect your job experience.

“You can say something to the effect of, ‘I would like to bring my background and experience to help you and your company where I believe my experience would be extremely helpful in this position,'” he says. “‘All of the things you list and you need, I’ve done before.'”

An interviewer asking about marital status could be making small talk, or could be trying to gain information on your family life or sexual orientation. No federal laws prevent discriminating against a candidate because of gender identity or sexual orientation. However, Segal says approximately 20 states, several cities and many individual counties have their own protections. The District of Columbia does, too.

Even though questions about sexual orientation aren’t directly prohibited under federal law, Segal adds that asking them can still land employers in legal hot water.

“If you ask someone ‘What’s your sexual orientation?’ they may perceive it as you’re trying to figure out their likelihood of getting pregnant or likelihood of having a potential disease based on stereotypes,” Segal says. “It’s a good idea for every employee to know what their rights are, to know whether their state or local jurisdiction protects them.”

If asked a question about sexual orientation, Segal recommends that candidates ask if they can stick more to topics related to the job. To find out if this is an illegal interview question in your area, contact your state’s employment office.