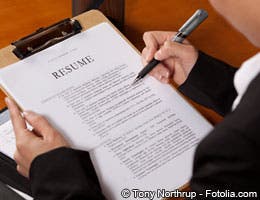 The challenges of resumes

Hiring managers get hundreds of resumes for every job opening. And employers hardly spend 10 seconds looking at a resume before they decide to keep it or toss it away, says Traci D. Thompson, with Resumes by Traci.

Job seekers’ resumes need to tell employers why they’re worth the time very early on. But that can be challenging for people who have been unemployed for a while, have been at the same job for years or see their age as a factor for not getting calls back.

Bankrate.com recruited four job seekers who faced some of those challenges and paired them up with professional resume writers for a resume makeover. Their new resumes emphasize key words, skills and accomplishments that hiring managers look for on resumes that could ultimately lead to job interviews.

Read on to see the challenges resume writers were faced with, and to see the “before” and “after” for each resume.

Makeover challenge: She works for a small startup company but is looking to join a more established company. In her job search, she sees her age as a challenge.

The unemployment rate among people 55 and older is 6.2 percent, down from 6.5 percent a year ago, according to the U.S. Bureau of Labor Statistics, but that doesn’t mean Kinsman-Saegert can’t stand out from the pack.

“A new resume, given my age, will help in getting me noticed,” says Kinsman-Saegert. “Once noticed, I can sell myself.”

What Kinsman-Saegert’s “before” resume failed to point out was what would make her more valuable than her competitors.

“There was nothing that identified the level of responsibility that she held or the level of success that she had in those positions,” says Angie Jones, resume writer with Haute Resume & Career Services.

Jones says recruiting firms look for resumes that tell success stories, describing a challenge the applicants faced, the action they took and the results. And older job applicants like Kinsman-Saegert should focus on their last 10 years of relevant work experience.

“The fact that they flipped hamburgers right out of college isn’t important to the hiring manager,” she says. “When we list every job since college, then we need to include dates, which raise red flags.”

Jones says some employers prefer younger professionals, so a resume that doesn’t imply the applicant’s age can open the door for an interview.

“At that point, it gives them an opportunity to really wow the employer with their skills and experiences.”

From employer to employee

Current job: No current job, but she owned a wholesale beauty distribution company in Miami for nearly two decades.

Makeover challenge: After selling the business in 2010, she did some independent consulting work. In March, she began sending out her resume, looking for a job in sales and new business development.

“I am seeking the opportunity to be involved in a team again,” says Martens-Curtis. “I am finding the need to be part of that hustle and bustle again.”

“To ensure the likelihood of having her resume reach the top of the pile, I added a title,” says Kiser, president and CEO of Elite Resume Writing. “In her summary, I also stated that she is experienced in both for-profit and nonprofit organizations.”

Kiser also added a quote from one of her mentor/clients as an endorsement testimonial in the summary.

Martens-Curtis is not necessarily looking for a job in the beauty distribution field, so Kiser rewrote her resume emphasizing skills that are transferable to other industries.

“Sherri’s strong summary showcases her talents, which will translate well in any profit or nonprofit organization,” says Kiser.

Job seekers, especially those in changing fields, need to make clear their intended job target and make sure their resume is congruent with that target, Kiser says.

“Match skills and attributes to the employer’s needs,” she says, adding someone may need to have multiple versions of a resume highlighting specific accomplishments based on each employer’s needs.

“Demonstrate that you can solve problems, build teams, increase bottom-line profitability or (do) whatever the position warrants,” she says. “Strategically select and document accomplishments and contributions, noting percentages and dollar amounts, displaying quantifiable accomplishments.”

Laid off in a bad econony

Current job: No current job. He was a senior project engineer for Huntington Memorial Hospital in Pasadena, Calif., when he was laid off in 2010.

Makeover challenge: He is working as a consultant while he searches for a full-time job in the construction industry. But his resume hasn’t worked well for him.

“My resume was my own invention,” says Diaz. “I wrote (what) I thought employers wanted to hear.”

That’s a good start, but having the keywords employers want to see and having your resume the order they want to read it is just as important, says resume writer Traci D. Thompson with Resumes by Traci.

Thompson researched similar job ads and job descriptions online to include all of the relevant keywords for resume parsing software.

She moved his education information to the second page and titled the section “Education & Continuing Professional Development,” to show that Diaz is working on a California architect state license.

“Only recent graduates should place education on the first page,” she says.

“A lot of times, hiring managers don’t want to look at resumes unless they have current work experience,” she says.

To top if it off, she added a LinkedIn profile address in the resume header and used different font sizes, color and bold face “to bring his document alive.”

Current job: A television production in Texas. Her 4-11 p.m. schedule leaves her little time to spend with her young daughter and husband.

Makeover challenge: She began looking for a daytime job in communications and public relations about three months ago. The response she’s been getting is that she doesn’t have enough experience in that field.

“I don’t know how to express in my resume my achievements and experience in television that can be applicable in a different job,” she says.

Resume writer Donald Burns rewrote DeLeon’s resume to immediately capture the attention of a hiring manager. In the current market, recruiters “eyeball” a resume in five to 10 seconds, he says.

“Imagine a recruiter with a stack of 20 resumes in her hands,” Burns says. “She skims them for five seconds looking for a favorable impression from a resume that jumps out from the rest.”

A strong headline and intro paragraph can accomplish that. Candidates must immediately communicate who they are, what they do better than anybody else and what they are looking for, Burns says.

DeLeon, who has a degree in print journalism, wants to get back to writing, so in the headline, Burns broadened the scope to include marketing communications and business writing.

“Erica’s original resume started with her name, address and objective — nothing stood out,” he says. “She focused too much on detailing all the tasks of her two jobs.” Instead, Burns moved up her awards for exceptional performance from employers.

“Put the spotlight on your results for employers,” he says.

A good resume also needs to be followed by a strong personal network and willingness to make a lot of phone calls and send a lot of personal emails, Burns says.