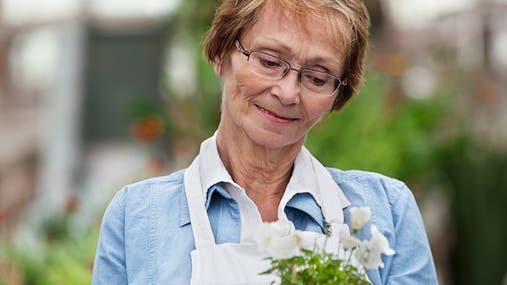 The number of older employees is proliferating in the workplace. In 2000, about 1 in 8 American workers were older than age 55, according to the U.S. Bureau of Labor Statistics. By 2010, that number had jumped to about 1 in 5. And the bureau projects that this age group will comprise a full quarter of the labor force in 2020.

So what’s going on here? It’s not all driven by boomers wanting to stay on the job for this reason or that. Some of it’s coming from higher demand. Research shows that, as the nature of work changes, some employers are developing programs to retain or recruit workers old enough to retire. And they’re showing their appreciation where it counts: Wages for older workers are heading north, according to the Center for Retirement Research at Boston College.

And those enduring myths about older folks — they aren’t productive, they haven’t kept up with industry changes, they’re just marking time — are falling by the wayside.

Myths and realities of older workers

At a recent conference on the aging workforce, the National Council on Rehabilitation Education, or NCRE, identified seven long-standing myths about aging workers. They are: technologically inept, slow learners, low-level performers, lacking creativity, not very motivated, less flexible and adaptable, and fear change.

“We’re finding these are not necessarily true,” says Susanne M. Bruyere, director of the Employment and Disability Institute at Cornell University’s ILR School and one of the conference’s key participants. “There is research that counters that.”

She says seniors bring a lot of advantages to the job, “things that come with life experience, such as ability to focus, higher attention to detail and a carefulness that leads to minimization of accidents.

“They may be less exposed to technology, but with the encouragement and mentorship of employers, it’s certainly possible for them to acquire new skills and become more technologically proficient.”

Among the advantages of a senior workforce noted at the NCRE conference were a low turnover rate, commitment to quality, good attendance and punctuality, high motivation and engagement, strong work ethic, flexibility, loyalty, and reliability.

With the recovery of the U.S. economy, there’s been a move among employers toward more flexibility in the workplace — a change that benefits aging workers, says Sheila L. Fesko, senior research fellow at University of Massachusetts Boston’s Institute for Community Inclusion.

“A flexible workplace has relevance across generations,” she says. “Parents need flexible work schedules, middle-aged people are dealing with parent care as well as child care, and older workers are looking at phased retirement.”

The National Center on Workforce Development, a part of the Institute for Community Inclusion, recently completed a one-year project that examined practices and strategies implemented by 18 U.S. companies in 13 states to recruit and retain older workers.

Fesko says the study found that companies seek older employees not from any moral imperative, but because it makes good business sense. Retention strategies run the gamut from phased or modified retirement options to comprehensive benefits packages that include wellness programs and investment counseling, she says.

At the other end of the spectrum, some companies — particularly big-box retailers — actively recruit seniors because they are looking to minimize their benefits obligations by hiring part-time workers. This can be a good fit for seniors younger than 65 who don’t want to work full time as well as those who are already collecting Social Security and don’t want to earn more than their threshold, Bruyere says. Social Security benefits can be taxed or even reduced — though they are credited later — if workers younger than full retirement age earn more than a certain amount.

“They’re not getting the same numbers of young people in the door with the same set of training and expertise,” Bruyere says. “Sometimes experience is really critical. We are losing some of that historical knowledge.”

For example, says Fesko, apprenticeships for skilled laborers are scarce now, and employers are not able to get trained apprentices, “so they really need to look at the retention of skilled workers.”

There’s a compelling reason why the old myths about aging workers are being replaced by more positive perceptions, says Steven A. Sass, program director of the Financial Security Project at the Center for Retirement Research. According to a study conducted for the center by Gary Burtless, a senior fellow at the Brookings Institution, the reason is education.

“Productivity is tied to education,” Sass explains. “For most of the 20th century, the educational level of older workers was lower. It was only by the time of World War II that it was pretty much standard that everyone had a high school degree.”

“That has all changed as the boomers age. Their level of college education is the same as for younger workers,” Sass says.

And since the compensation of workers is based on educational attainment, Sass says, graying employees are also earning more than they once did. Older men, the study reports, have seen increases in their pay. In 1985, they earned just 70 cents for every dollar of average annual income earned by adult men in their prime. By 2010, that had jumped to 92 cents on the dollar.

Older women’s annual incomes are also increasing faster than the incomes of women in their prime, according to the study, though they still haven’t caught up with their male colleagues.

“The workforce of older Americans is not only getting bigger,” Sass says. “What Burtless shows is that their status in the labor force is also getting better.”