Could your job be taken away by a robot? 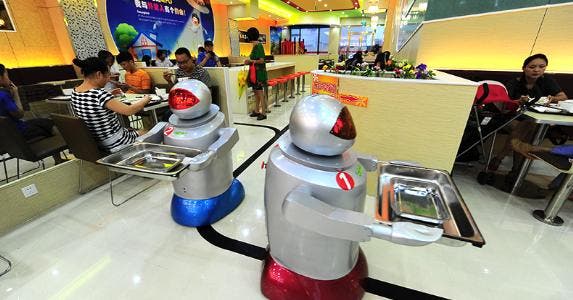 Man versus robot is a common — and often chilling — storyline in science fiction. Most apocalyptic are the Arnold Schwarzenegger “Terminator” movies, where people are on the run from killer robots in the wake of nuclear devastation. (“That terminator is out there. It can’t be bargained with. It can’t be reasoned with.”)

While today’s robots don’t instill that kind of fear, the advance of automation into many industries has been scary for workers. And for good reason: A study by Oxford University says nearly half of U.S. jobs are at risk of being replaced by computerization over the next couple of decades.

Should you worry about losing your job to a robot?

While robots haven’t yet taken over, computerization has been making an undeniably growing imprint on the economy.

Talked to a telephone operator recently? Have you visited a human bank teller to withdraw cash or booked airline tickets with a live travel agent lately? If you are like most people, the answer is probably no. Those tasks have been automated or replaced by the Internet.

Leading-edge electric car manufacturer Tesla, like other automakers, is using automation to build cars. But humans remain a necessary part of the process there and elsewhere.

Robots are being tested to clean hospital rooms. Starwood Hotels has begun using robot butlers at a hotel in Cupertino, California, down the street from Apple’s campus. Restaurant chains have deployed touch-screen technology to take orders, replacing some wait-staff responsibilities. There’s even a restaurant in China where robots greet customers, cook the food and serve it to the customers.

“Technology is always, in every era, causing jobs to be lost and then new ones to be formed. People move on to new jobs. The economy changes and the work and the cycle keeps going,” says workplace trends expert John Challenger, CEO of the outplacement firm Challenger, Gray & Christmas.

The Oxford study analyzed statistics from the U.S. Department of Labor to predict that 47 percent of American jobs could be automated.

Citing the advent of Google’s driverless car technology, the report says most workers in transportation and logistics occupations “are likely to be substituted by computer capital,” along with those in office and administration support and production.

Also in the robots’ bull’s-eye: sales positions, including cashiers, counter and rental clerks, and telemarketers. If the frequency of “robo-calls” is any indication, that shift has already begun.

“There’s no question that technical change is accelerating, and to the extent it accelerates, what it does is create dislocations and transitions,” says economist Joel Naroff with Naroff Economic Advisors.

The Pew Research Center ranked occupations most and least susceptible to automation. If you are editing papers or working in a film projectionist’s booth, the outlook isn’t so good. But if you are a firefighter or a sports trainer, you should be fine.

Pew says these jobs are most at risk from robots:

Those least susceptible to being replaced include:

People need to be “constantly educated, re-educated and retrained” for jobs that employers want to fill, Naroff says.

Fortunately, there’s still plenty of work for humans to do. In a survey of hiring managers and human resource professionals, CareerBuilder and Economic Modeling Specialists International found:

Tom Kloza, co-founder of the Oil Price Information Service, recalls one experiment in automation that backfired for oil giant Shell. About a decade ago, it tried to use robots to pump gas.

“There were some problems. For example, the robotics sometimes put the fuel in the back seat of the cars,” he says. “We haven’t really seen any progress on that front.”

Could a robot take your job?

Robots are taking over the world. Telephone operators, travel agents and bank tellers have largely been replaced by robotic counterparts. Could your job be next?

Though there's now a restaurant in China where robots greet customers, cook food and serve patrons, not every job can be automated on a large scale.

Many can, however -- a recent study found that nearly half of U.S. jobs may be done by robots in the next 20 years. Retail sales positions could be automated as could telemarketers, proofreaders, meter readers and secretaries.

The robot usurpers have been thwarted by some jobs. Early attempts at automating gas station attendants led to gasoline being pumped into the back seat of cars. Grocery store checkout also defies automation. Self-checkout scanners can be glitchy, not to mention the high likelihood of user error. Even in this day and age, the human touch is sometimes necessary.

The grocery store is another place where automation’s shortcomings have been on display.

While supermarket scanners work well when used by trained employees, self-scanners have produced mixed results. It can be infuriating when you have to wait for an attendant to intervene or override the computer when there’s a line of customers behind you. You might have heard an error-prone automated register say “Place your item back on the belt!”

“What shoppers want at the last touch-point in the store is ‘human,'” says analyst Phil Lempert of SupermarketGuru.com. He says better speed at checkout isn’t what consumers want, even if that can be delivered by the technology.

More serious is the growing dependence on automation by airline pilots. The National Transportation Safety Board said the flight crew was too reliant on complicated automation before the 2013 crash of Asiana Flight 214 in San Francisco that killed three people and injured more than 200 others.

Humans typically prevail over the robots in sci-fi movies. And in real life, we still command the upper hand over robots when it comes to employment prospects.

“Somebody has to program the robot, somebody has to maintain the robot. It’s not as if the robots just show up,” says John Silvia, chief economist with Wells Fargo.

Come to think of it, maybe the job with the best outlook is “manager of robots.”