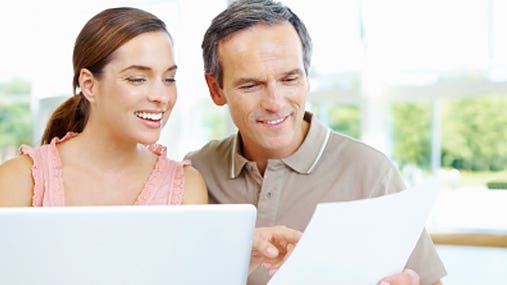 If you’re looking for a hybrid between a passively managed exchanged-traded fund, or ETF, that tracks an index and an actively managed mutual fund that doesn’t, you might want to consider smart beta ETFs.

These ETFs are based on indexes but don’t match them exactly. For example, the Standard & Poor’s 500 index and many other stock indexes are market capitalization-weighted, meaning that the stocks with the highest market values make up the biggest part of the indexes. Market capitalization, or market cap, is calculated by multiplying a company’s stock price by the number of shares outstanding.

So, a standard ETF based on the S&P 500 would be more heavily weighted toward mega cap stocks, such as Apple and Exxon Mobil. But a smart beta fund might hold equal weightings of all 500 stocks.

Smart beta funds seek to outperform the benchmark on which they are based or offer less risk. Many are designed to do both. “Beta” is a measurement of volatility compared with the market as a whole.

Investment research firm Morningstar counts 353 smart beta ETFs. Most of them focus on stocks, but they encompass bonds, commodities and other asset classes, too.

The Chicago-based firm prefers to call the funds “strategic beta” rather than smart beta.

“‘Smart’ has a positive inference that’s not always warranted and implies that anything not smart is of inferior intelligence,” says Ben Johnson, director of the Morningstar’s passive funds research.

However, since smart beta is more commonly used, we use that term here.

Smart-beta funds are the children of a passive father and an active mother, as Johnson puts it. As for the pros of smart beta ETFs, the passive father means low costs, with fees significantly lower than actively managed funds, he says.

The average expense ratio for smart beta ETFs is 0.49 percent, according to Morningstar. That compares with 1.25 percent for the average actively managed, open-end mutual fund.

Also on the pro side are the stability of an index-based strategy and the transparency of what’s in the fund and its strategy, Johnson says.

In a smart beta fund, the manager is “just trying to diversify the portfolio and rebalance it over time,” says Paul Bouchey, CFA, managing director of research at Parametric Portfolio Associates, a money management firm in Seattle.

Meanwhile, the pro of having an active mother is the potential for a superior risk-adjusted performance compared with a standard, market cap-weighted benchmark, Johnson says.

In addition, there’s the potential for an inferior risk-adjusted performance compared with a standard, market-cap-weighted benchmark, he says. “The math of being active can cut both ways.”

Keep in mind that because your fund isn’t passively following an index like a standard ETF, you’re taking more risk in a smart beta ETF, says Rick Ferri, founder of Portfolio Solutions, an investment management firm in Troy, Michigan. “You’re taking more risk with the hope of a higher return,” he says.

But there can be long periods of underperformance — 10 to 15 years, Ferri says. “Over the last 10 years, value and small-cap stocks have done well, but not in the 1990s,” he says. “You have to know what you’re buying and stick with it your whole life. It’s a lifelong investment strategy, not a flash in the pan.”

As for volatility, smart beta funds averaged volatility of 16.3 percent, as measured by standard deviation, for the three years through April 30, according to Morningstar. All ETFs averaged a higher volatility of 19.7 percent during that period. To be sure, some smart beta ETFs are quite volatile.

When evaluating funds, “it’s important not to make this into a Lake Wobegon,” Johnson says. “It’s not a space where everyone is above average. Investors should apply the same scrutinizing analysis as they would for any other investment.”

The first priority is to avoid overpaying, he says. “It’s important to assess whether you will truly get value for your money.”

Many smart beta funds are young. So, remember that if you are looking at a fund’s back-tested results, they may not match what will happen under real market conditions, says Senior Investment Analyst Jim Rowley, CFA, with Vanguard in Valley Forge, Pennsylvania.

The PowerShares Buyback fund holds stocks of U.S. companies that have bought back at least 5 percent of their shares in the prior year. It weights each position by market cap, with a 5 percent maximum.

“This results in a portfolio of quality, shareholder-friendly companies that may continue to generate attractive returns,” Morningstar analyst Alex Bryan writes in a report. The fund averaged an annualized return of 23 percent over the five years ended May 16, compared with 19 percent for the S&P 500.

The PowerShares FTSE stock fund consists of the 1,000 largest U.S. companies from the FTSE US All Cap Index. It doesn’t weight its holdings by market cap, but rather on various measures of size, including book value, cash flow, sales and dividends. The fund skews toward value stocks.

“This is a suitable core holding for long-term investors who can stomach a little extra volatility to profit from potential market mispricings, or a value risk premium,” Bryan reports. The fund averaged an annualized return of 21 percent over the five years ended May 16.