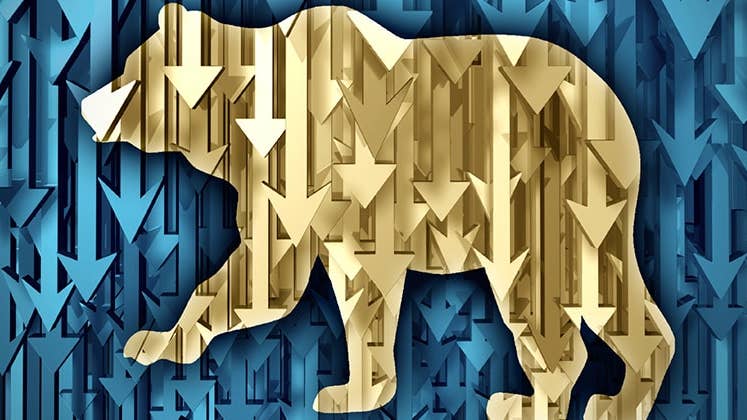 Americans have long memories, especially when it involves their pocketbooks. As a result, the memory of the severe stock market declines suffered in the 2007-2008 financial crisis and the Great Recession has prompted many potential investors to steer clear of equities.

That’s one of the findings of Bankrate’s 4th-quarter Market Mavens survey of top investing professionals and economists. The experts believe the risk of a bear market has grown since the previous survey, now favoring U.S. stocks over international equities.

Asking stock market pros: When will the Fed raise rates?

Our survey found a range of answers on how long the Fed will wait to push the button.

Among challenges facing investors, more than 90% of those surveyed are either “somewhat” or “very concerned” about the possible impacts that China could have on the U.S. economy and stock market. On average, they expect a return of 9% in the Standard & Poor’s 500 index over the next 12 months. 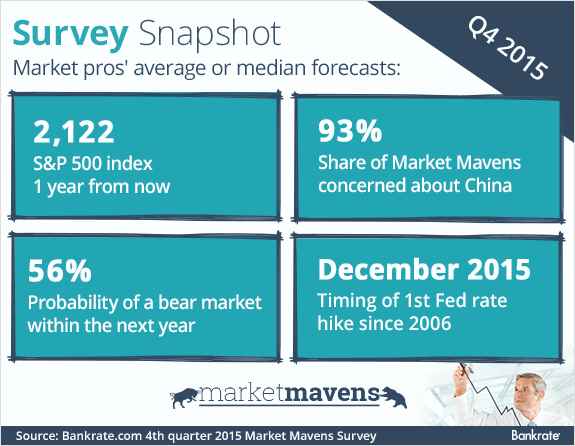 Distaste for stocks: One of the most resounding responses suggested that many individuals still have a sour taste when it comes to stock investing. We asked the Market Mavens about Americans’ willingness to invest in the stock market now, compared with before the financial crisis and Great Recession, and 87% said most in the U.S. are less willing to take the plunge. “The investor who has lived over the last bear cycle is cautious. That, however, will change in time,” says Jim Osman, CEO of The Edge Consulting Group. Just 7% feel Americans are more willing to invest and the remainder say it’s the same as before.

Positive market outlook: Despite the recent stock market declines, the mavens remain mostly upbeat on the outlook. Taken together, they predict a 9% rise in the benchmark S&P 500 over the coming year. “The low inflation environment with a progression of slow Fed rate increases should benefit domestic growth through continuing modest job and consumer income growth,” says Brian Rehling, co-head of global fixed income strategy at Wells Fargo Investment Institute.

The outlook is less optimistic than in our previous index. The median forecast for the S&P is for 2,122, up from about the 1,950 level during the survey period. Forecasts for the benchmark index 12 months from now ranged from 1,850 to 2,250.

“Profits will grow slowly or decline due to a deceleration in overall economic growth and the strength of the dollar,” says Francisco Torralba, senior economist for Morningstar.

U.S. versus the world: Here, an almost patriotic theme prevails. There’s been an inward shift on the geographic focus for where the best returns in the stock market will come from. Some 47% of the experts now look for the best returns coming from the U.S. market over the next 12 months. “A number of emerging markets are facing significant hurdles, notably the energy producers, but also many commodity producers. In contrast, the U.S. economic outlook is solid,” says Charles Lieberman, chief investment officer of Advisors Capital Management.

Growth or value stocks? Here, the Market Mavens continue to be fairly split on the outlook for best returns over the next year. One-third favor value stocks, while 20% predict growth stocks will fare best. “Upside for growth stocks will be harder to come by as the Fed jawbones the potential for higher interest rates, and might even raise rates, at a time when the market valuation is already full,” said Patrick J. O’Hare, chief market analyst for Briefing.com. The remainder, nearly half of those surveyed, say the returns on growth and value will be about the same.

Signs of a bear market? The survey suggests the chances of a bear market, a decline of 20% or more, have escalated. Nearly half of the experts said the odds were between 1-in-4 and 1-in-2, up from 30%. The average probability was put at 56%, up from 37% predicted in the 2nd quarter. “This bull market is getting on in years. Its age, combined with the economy’s projected low-growth trajectory, make them both vulnerable to unexpected downdrafts,” says Sam Stovall, U.S. equity strategist at S&P Capital IQ. However, the outlook doesn’t necessarily favor a significant downturn, says Michael K. Farr, president and CEO of Farr, Miller & Washington. “I don’t believe a bear can find traction as long as central banks continue to provide so much grease,” he says.

Risks associated with China: Survey respondents are overwhelmingly worried that China’s slowing growth will crimp the U.S., which is something that might have been unheard of a year or 2 ago. More than 9 in 10 were concerned about China’s economy, which has been blamed, in part, for stock market declines in recent weeks. “A Chinese recession (or worse) has the potential to drag down global economies and continue to complicate the decisions of central bankers around the world,” says Mark Willoughby, senior vice president at Hilliard Lyons.

Finally, a Fed rate hike? If the Market Mavens have it right, the Federal Reserve will hike interest rates during this holiday season. Nearly half of our experts predict the nation’s central bank will raise rates in December. One who thinks a rate hike is in the cards this year is Don Taylor, president and chief analyst for Emmett Advisers and a Bankrate columnist. “A rate increase in 2015 is an important signal to the financial markets, and the October meeting doesn’t provide enough time for improvement in the global economy,” says Taylor, known to Bankrate readers as Dr. Don.

Another 40% say the 1st rate hike since 2006 won’t come until roughly a decade later in 2016. The latter group includes Marilyn Cohen. “The Fed has boxed itself in and wants more than ever to leave 0% interest rates behind them,” says Cohen, president of Envision Capital Management.

How should consumers use the results of Bankrate’s survey? Here’s advice from Greg McBride, CFA, chief financial analyst at Bankrate.com: