Will the Supreme Court kill Obamacare? 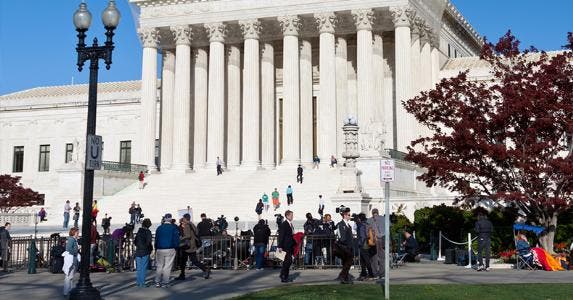 President Barack Obama’s signature domestic achievement, the Affordable Care Act, is making its way before the Supreme Court again, in a case that puts the law at risk of losing its pulse.

At issue are the federal tax subsidies at the heart of the law that have made health insurance more affordable for many. According to one nonpartisan study, the appeal now before the nation’s highest court threatens to set off a chain of events that could bring about a nearly 50 percent increase in health insurance premiums in most states.

The latest Supreme Court challenge is based on a mere four words in the Affordable Care Act. The passage in question says money-saving tax credits are available to people who sign up for Obamacare through a health insurance exchange “established by the State.”

Many states declined to set up their own online insurance exchange, or marketplace; most are using the federal website HealthCare.gov. Plaintiffs in King v. Burwell, the case going before the nation’s highest court, argue that those who enroll using the federal site should not be eligible for the tax credits.

“There is only one legitimate way to read the ACA’s plain text: Exchanges may be established by either the state or by (the Department of Health and Human Services), but subsidies are available only for coverage through the former,” the plaintiffs told a lower court.

“We are confident that the financial help afforded millions of Americans was the intent of the law and it is working as Congress designed,” Press Secretary Josh Earnest said in a statement.

Most Obamacare enrollees get tax credits

The vast majority (85 percent) of people who enrolled in an Obamacare health plan received financial assistance to lower the cost of their coverage in 2014, according to the federal Department of Health and Human Services. The Congressional Budget Office estimated that the average subsidy was worth more than $4,400 last year.

If the court rules in favor of the health law’s challengers, those subsidies would likely be eliminated in most states, says Erin Fuse Brown, an assistant professor of law at Georgia State University in Atlanta.

“Most people think that in the states that have federal exchanges that the core of the law would be gutted,” she says. “We would expect to see a lot more uninsured in the states (using HealthCare.gov).”

A study by the nonprofit and nonpartisan Rand Corp. estimates enrollment in health plans sold directly to individuals would plunge by 70 percent.

“The expectation is that some of those people won’t be able to afford the premiums without the tax credit, and will drop their coverage,” says JoAnn Volk, a senior research fellow and project director for the Center on Health Insurance Reforms at Georgetown University in Washington, D.C.

That could set off a health insurance “death spiral,” advocates say. Only the people who need coverage the most — usually those who are older and sicker — would hold on to their coverage, causing premiums to skyrocket. The Rand Corp. predicts individual-market premiums could jump 47 percent in states using HealthCare.gov.

‘Plan B’ for states affected?

The subsidies would come to an end in states using HealthCare.gov only “if everyone stands still,” explains Deborah Chollet, a health insurance research leader at Mathematica Policy Research in Washington. There are other options.

“One would be that the states open a state-based exchange,” she says.

However, that’s hardly a simple undertaking.

“Some states may be able to do that … but these exchanges aren’t ‘plug and play,'” Chollet adds.

Volk agrees. “An exchange is much more than just a website,” she says. “There’s a lot that makes it happen, with legal authority and financing and a lot of other things, that it’s not an easy transition.”

If the Supreme Court does decide that consumers who buy coverage on HealthCare.gov are ineligible for the tax credits, the ruling would go into effect 25 days later, she says.

The decision’s impact would go beyond the individuals and families who receive financial assistance through the health law, Brown says.

“The health care providers — the hospitals, the doctors and other clinics — that have just started to see the benefits of increased coverage in those states, they’re going to go back to seeing more uncompensated care,” she says.

Chip Kahn, president and CEO of the Federation of American Hospitals, is optimistic that the justices will uphold the tax credits.

“Clearly, Congress intended the Affordable Care Act to expand coverage as broadly as possible, and for subsidies for purchasing marketplace-based coverage to be available to every single citizen in the United States,” Kahn said in a statement.

Business as usual, for now

Until the decision is handed down, which could be in late June, Obamacare enrollees should go about their business as usual, Volk advises.

“I think people are confident that if the court reads the law, not just those four words that are at issue, but the full law … that the court would not agree with the plaintiffs and that the subsidies will be upheld,” she says.

“We are confident that the Supreme Court will recognize both the clear reading of the entire law, and the certain intent of Congress in crafting it,” Press Secretary Earnest’s statement said.

The Supreme Court is scheduled to hear arguments in the case, King v. Burwell, on March 4.