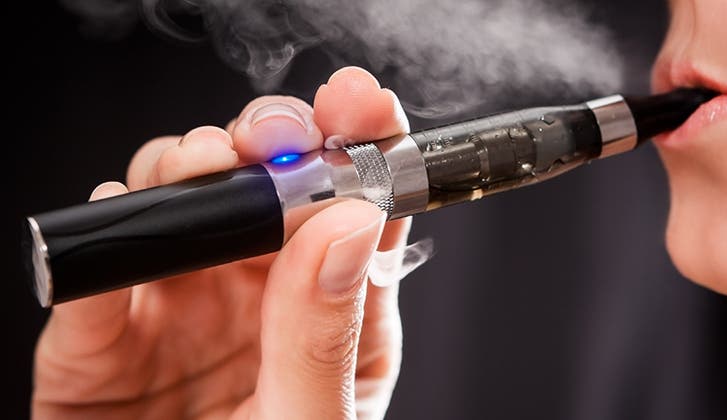 Could puffing on an electronic cigarette inflate your insurance rates?

It’s highly unlikely for home and auto policies, which are primarily underwritten based on the property value and liability risk of structures, vehicles and their contents, not the health habits of their owners. In fact, representatives for two property and casualty insurance trade groups, the Insurance Information Institute and the American Insurance Association, drew a blank when asked about underwriting concerns around e-cigarettes.

Save on Your Health Insurance — Compare Quotes From Reputable Insurers!

However, e-cigarette use — called “vaping,” because the user breathes in a vapor — could send your health, life and long-term care insurance premiums soaring, depending on the carrier and coverage type.

For the uninitiated, e-cigarettes contain a battery-operated atomizer that the U.S. Food and Drug Administration says turns a liquid mix of nicotine, flavor and other chemicals into a mist that the user inhales.

The issues for insurers

Three factors have placed e-cigarettes in a precarious gray area where insurers are concerned:

To most life insurers, it’s all smoking

“A lot of the insurance applications say, ‘Do you use tobacco products?’ I think that 90-plus percent of former cigarette smokers who have quit with e-cigarettes and no longer use tobacco are going to mark ‘no,'” he says. “The problem is, they may end up testing positive for nicotine, which is what the insurance company uses to make a tobacco determination.”

Mike Woods, agency underwriter for Pinney Insurance in Roseville, California, says most companies test solely for the presence of a nicotine byproduct, at a level above what could be triggered by secondhand smoke.

“We just had a big national (life) underwriters meeting where this was discussed at length, and as long as there is nicotine delivery, they’re going to keep the same stance,” he says. “There is only one major life carrier that I’m aware of that doesn’t do that: Prudential will allow nonsmoker rates for e-cigarette use.”

“Much the way users of alternate forms of tobacco and/or nicotine products such as pipes, cigars and nicotine gum are considered, ongoing studies and regulations will help determine the best approach to underwriting e-cigarette users,” he says.

But nearly 90 percent of 151 life underwriters said they consider an e-cigarette user a smoker, according to a May 2014 survey by Munich American Reassurance Co.

Life insurers have ample reason to err on the side of caution: The Centers for Disease Control and Prevention estimates that smoking cuts life expectancy by 10 years, limiting the amount of premiums insurance companies can collect before a death benefit will have to be paid.

And, the World Health Organization recently called on governments to ban the use of e-cigarettes indoors and in public places until more is known about the health effects of secondhand vapor.

Health insurers are equally conservative with regard to vaping, given that health officials liken it to tobacco use.

“Tobacco use is one of the limited factors that health plans can take into account when determining premiums,” says Clare Krusing, spokeswoman for America’s Health Insurance Plans, a trade group in Washington, D.C.

“They would have to be shown to be ‘safe and effective’ in order to win approval,” she says.

“The society does not recommend e-cigarettes as a smoking cessation tool at this time because there simply isn’t enough evidence available on its efficacy,” he says. “More research is needed to answer the many questions about e-cigarettes, including: if they are safe to use, especially over time; how effective they may be in helping smokers quit; and if they encourage nonsmokers to start.”

Some love from long-term care

But many long-term care insurers are willing to offer a break to vapers, according to Scott Olson, founder of the brokerage LTCShop in Redlands, California.

“Long-term care is not asking about it at all,” Olson says. “Most LTC companies right now are not looking at nicotine use as a major problem; others will only charge more for cigarette use and won’t charge more for cigars or pipes. Those that do, it’s probably 15 to 20 percent more premium.”

Woods, with Pinney Insurance, doubts that the forthcoming FDA decision on regulating e-cigarettes will have any immediate impact on insurance underwriting.

“It will matter, but it’s not necessarily going to change their mind,” he says. “The long-term effect of vaping is not yet known. When in doubt, be on the conservative side.”

More On E-cigarettes And Insurance: