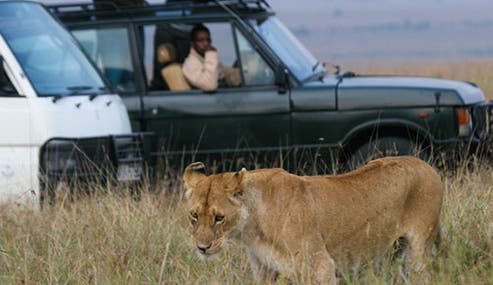 When you book a vacation, you hope the worst will never happen.

But travel insurance and assistance companies will tell you the worst happens almost every day. “In about 90 percent of our cases, something went wrong that (the traveler) wouldn’t have imagined,” says Mike Kelly, CEO of On Call International, a traveler assistance service.

Things can go wrong in bizarre ways, such as the misfortune that came in threes for one recent On Call customer. While traveling for business in Asia, the man required an emergency appendectomy. After the operation, he was waiting for a ride when a tree limb fell over and struck him, causing him to be readmitted, Kelly says. When he was discharged again, he ended up in a taxi accident.

“You can’t make this stuff up,” Kelly says.

Maybe it’s fitting that safaris produce some of the wildest stories that you’ll hear from travel insurance companies.

On a trip in Africa, a Travel Guard insurance customer shot a lion. When she and her husband went to inspect it, the lion jumped up and charged toward them, says Carol Mueller, a Travel Guard vice president. Out of ammunition, the woman stepped back and fell into a hole; meanwhile, the lion grabbed her husband’s arm. “Both survived but needed to end their trip early, with unexpected medical treatment,” Mueller says.

The couple’s personal insurance covered their medical expenses. They were reimbursed for the missed portion of their safari, under the trip-interruption benefit of their travel policy, says Mueller.

Lions — and the humans who view them — cause all kinds of problems, it seems. While on a hiking tour in a national park in Kenya, an On Call International customer was walking near a pride of lions. She reached down to pet a lioness — which promptly reared and grabbed her by the throat, Kelly says. “We were able to get her medevaced to Johannesburg (South Africa).”

But not all travel insurance companies handle situations the same way, so you need to read the fine print on what’s covered. The travel insurance and services company WorldNomads.com denied a claim from a woman who incurred a gashed wrist when she stopped to pat a lion cub on the head during a trip to Zimbabwe.

“Catching a bug” when traveling usually refers to stomach illness. Not so for a WorldNomads customer in southern Mexico. A parasitic fly laid eggs under the skin in his leg, and the eggs hatched into wormlike larvae. “The doctor advised our client to put a piece of raw meat on his leg to draw out the worms,” Sylvester says, then clarifying: “OK, they’re maggots.”

“We paid for the consultation and some antibiotic medicines,” he adds.

WorldNomads.com publishes such tales in its “True Stories” section. The insurance payouts include more than $16,000 to a United Kingdom resident who suffered a shark attack in Indonesia and $439 to a man who tore part of his privates in the midst of a romantic vacation, Sylvester says.

Looking for danger — and finding it

Besides outlining real dangers and claims, the WorldNomads journal also has a few near-misses. One of the scariest involved a traveler in Tanzania’s Tarangire National Park who went off into the bush with a friend, on a motorcycle. The man said he was looking out for animals “large and grumpy” — and instead discovered a predator “long and slithery” when a black mamba, one of the world’s deadliest snakes, almost bit him in the throat.

In its response, WorldNomads notes that going into the African wilds without a guide is considered extremely risky — and that a claim involving an actual bite might have been denied. But this traveler might not have lived long enough to file; death from a black mamba bite can happen within 30 minutes.

Sometimes the dangers aren’t as exotic. The cruise passengers who signed up for a donkey excursion in Santorini, Greece, didn’t expect thrills as they plodded along an island trail. “One of the donkeys slipped, creating a donkey pileup,” Kelly says. “It was like cars in a snowstorm.” Several members of the group sustained minor injuries, and On Call International paid to get them home.

A WorldNomads client in India looked down and saw a stray dog licking an open wound on his leg. Later, he discovered the same dog had been roaming the streets, biting people and that it died that same day from rabies. The doctor in India advised an immediate shot of rabies immunoglobulin, followed by a series of five vaccinations. “We paid $273 in medical bills and vaccination costs,” Sylvester says.

What helps in getting a claim paid? Accumulating meticulous records of your adventures, says Mark Kahler, About.com’s Budget Travel guide. “Keep receipts for even the smallest purchases because they establish timelines as well as costs.”

Alcohol creates its own sense of travel hazards. Most travel insurance policies make it clear that if you’re inebriated or doing something illegal, you probably won’t be covered.

In its journal, WorldNomads.com notes how many claims it receives from young travelers who injure themselves while tubing on a river in Vang Vieng, Laos, a notorious international party scene. Sylvester asks: “Is a drunken swing off a rope into foreign waters worth weeks in the hospital and potentially dying? When you are on the road, you really need to ask if you’re there to experience the world — or experience being wasted.”