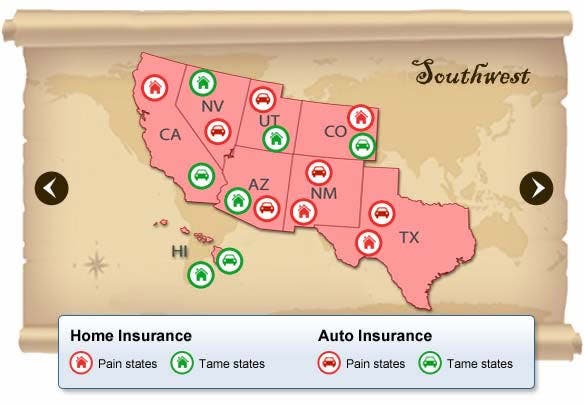 Income demographics are the key to insurance pain in the Southwest. On both home and auto insurance, for example, New Mexico ranks well above California on the pain scale, even though its average expenditures are lower.

“New Mexico has the lowest median income in the country ($55,561), so its pain index is not below the national average; it’s way up in the top,” says Sullivan.

Similarly, while Hawaii’s average home expenditure ranks 13th in the nation at $862, the Aloha State only ranks 30th in the pain index. The reason? With a median income of $91,483, Hawaiians can afford it.

What about those California earthquakes? “They’re not a factor because earthquakes (are) excluded from coverage in most homeowners insurance policies,” Baranoff says.

As for car insurance, terrain may have less to do with rates than the type of vehicles being insured.