Fearing that their recession-cracked nest eggs won’t go the distance, boomers have shunned the relatively expensive option of buying private long-term care (LTC) policies. That has slowed their sales to a trickle, and so has a common misconception. 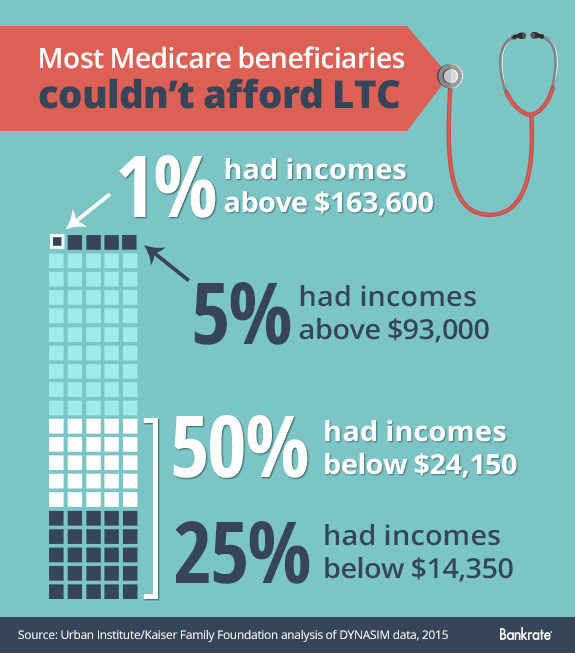 Long-term care is covered not by Medicare but by Medicaid, the federal/state low-income safety net. But to access that coverage, you must meet not only your state’s age and disability requirements, but also its income and asset limits. Most states cap the “countable asset” figure (excluding your home and 1 car) at $2,000 for an individual and $3,000 for a married couple, which effectively forces many seniors to “spend down” into poverty to qualify for assistance.

Isn’t there a better solution than impoverishing individuals so they can afford nursing home care?

Yes. Many countries cover long-term care under their universal health coverage, funded by taxes, trusts or both. Some, like Japan, resorted to government-sponsored long-term care insurance for economic reasons, to keep their young people in the workforce rather than home caring for an aging population.

“Currently, just about half of all long-term care is paid for by government, be it Medicare or Medicaid, although it may be labeled under different things such as ‘acute care,'” he says. “While we have a completely dysfunctional LTC system, we also have a disconnect when it comes to a universal LTC program. It’s like a 3rd rail that nobody will touch — and we don’t have the (economic) need to.”

The mechanics of merging 2 disparate systems like Medicare and Medicaid should not be underestimated, according to Randy Brown, the director of health research senior fellows at Mathematica, a Washington, D.C., health care think tank.

“There are all kinds of studies, including some of mine, that find that coordination between acute care (Medicare) and long-term care (Medicaid) is pretty bad,” he says.

Brown says while both agencies share the goal of keeping aging Americans out of costly nursing homes, Medicare’s focus on managed care, physician and prescription services is worlds away from the issues faced in long-term care administration, such as informal or family care.

“Managed care plans are not very good at the LTC side; they don’t know much about it,” he says. “They’re used to the commercial population where LTC doesn’t even exist, so it’s not an issue.”

Brown’s studies convinced him that moving long-term care coverage from Medicaid to Medicare would be little more than a left-pocket, right-pocket proposition.

“I can’t believe that huge amounts of money would be saved, despite the fact that we’d all like to see that,” he says.

So what is the solution for this broken long-term care system?

Dr. Bob Master thinks it lies at the community level.

As the CEO of Commonwealth Care Alliance, a Massachusetts-based nonprofit care system that combines Medicare and Medicaid funding streams, Master has seen the savings in both money and lives by providing a total package of acute and long-term care services to his state’s most vulnerable populations.

“We’ve been able to demonstrate that you can dramatically reduce nursing home placements and keep people at home and independent,” he says. “If you can delay or prevent that through the right mix of services, spending the money for long-term services is more than offset by the downstream costs of paying $300 a day for a nursing home forever.”

Master is skeptical that such cost efficiencies would be possible under Medicare.

“The way LTC services are provided, you really need to know the ecology of your cities, towns and cultures. There’s a whole range of nonprofit agencies that come together to do this, and it’s deeply intertwined in the local ecology,” he says. “By contrast, a Medicare program is a national, vanilla, one-size-fits-all program. That’s fine for acute care, but with LTC you really need local administration.”

New taxes? Don’t even go there

Master, the American Association of Long-Term Care Insurance’s Slome and Mathematica’s Brown all agree that any Medicare long-term care program would almost certainly involve new taxes — a deal-breaker given the current political climate.

“Medicare LTC is a nonissue to the average politician because the population has not made it an issue to them,” he says. “But if the reason we can’t fund education in the future is because we’re paying hundreds of billions of dollars to care for aging seniors, that may change things.”