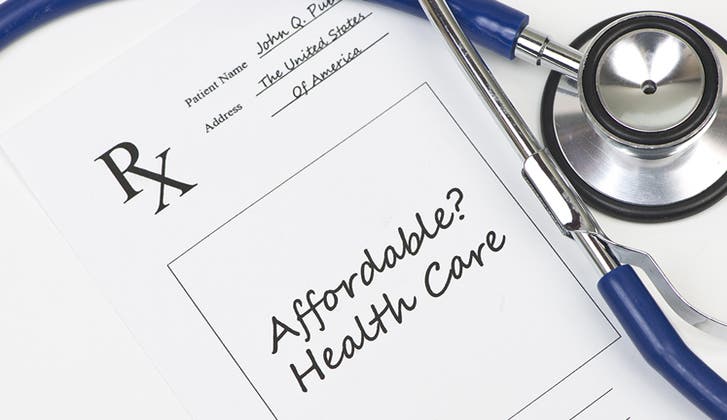 The Affordable Care Act, or ACA, has made health insurance accessible for millions of formerly uninsured people. But are Obamacare health plans as affordable as the law’s name implies?

For some people, no. My experience could be a case study.

Big hike in premiums and no subsidies

My pre-ACA individual health insurance policy had a $317 monthly premium and $5,200 annual deductible. It provided me with protection against catastrophic medical bills, reasonable negotiated rates for services and access to a wide selection of doctors.

In 2014, my policy was canceled because it didn’t comply with the health care law, and my insurer moved me into a new “bronze” plan. Obamacare plans come in four metallic tiers; bronze is the lowest tier and pays just 60 percent of covered medical expenses.

The Affordable Care Act offers subsidies to help with the costs, but my income level makes me ineligible for those.

I had to wonder: In what way is a more-than-20-percent spike in premiums “affordable”?

I like my Obamacare plan’s preventive services at no additional cost, the end of lifetime caps on health benefits and the ability to change plans without worrying about pre-existing medical conditions. But no plan includes all of my doctors in network. In fact, one doctor’s group practice has even had a sign at reception saying, “We do not accept any ACA insurance.”

Low-income people who qualify for the subsidies — premium tax credits and reductions in deductibles and other out-of-pocket costs — have received the greatest benefit from the law, says James Scullary, a spokesman for Covered California, my state’s state-run health exchange.

Covered California signed up more than 1.3 million people in 2014’s open enrollment period. Some of those people pay no monthly premium, $3 copays for doctor visits and $5 for prescription medicine, while others pay a monthly premium that’s less than the cost of cellphone service or a gym membership, Scullary says.

How the subsidies work

Nearly half of low-income health-exchange shoppers said it was easy to find an affordable plan, but just 36 percent of those with higher incomes felt that way, according to a 2014 survey by the Commonwealth Fund, a private foundation that supports independent research into health care issues.

The tax credits that cut monthly health insurance premiums are available to individuals who expect to earn no more than $46,680 in 2015. As a person’s income increases toward that threshold, the subsidy amount is gradually reduced.

“When the subsidies phase out completely, you start to pay the full premium, where you’re buying a plan on your own,” explains Sara Collins, vice president for health care coverage and access at the Commonwealth Fund.

For Obamacare’s out-of-pocket assistance, the income cutoff is $29,175 for individuals. This type of subsidy, known as “cost-sharing,” is available only with an enhanced silver plan and “essentially moves people … up to a gold- or platinum-level plan,” Collins explains, referring to the ACA’s highest tiers.

A silver plan, which normally pays 70 percent of covered expenses, pays up to 94 percent with the cost-sharing.

I’ve searched the state exchange and consulted an insurance broker, but no plan is a better fit for my needs than my current plan.

The value of the Affordable Care Act for higher-income people comes in the form of benefits such as guaranteed coverage and caps on out-of-pocket costs, Scullary says.

That argument doesn’t sway me, since everyone in an Obamacare plan receives those benefits.

Affordability of health care should be measured in the context of other major household expenses, says Elena Marks, CEO of the Episcopal Health Foundation and a nonresident fellow in health policy at the Rice University Baker Institute in Houston.

“If you’re making $60,000 a year and you’re expected to pay, say, 9 or 9.5 percent (of your income) for your health care, if you put that in the context of what you pay for housing and food, you have to ask if that is unreasonable,” she says.

Too expensive, even with a subsidy

My situation isn’t extreme. If I were 10 years older and lived in a smaller nearby county, the premium for my bronze plan could be considerably higher, according to what I’ve seen in Covered California.

Meanwhile, even some people entitled to subsidies say Obamacare plans are too expensive. In a 2014 survey of uninsured Texans who looked into exchange plans but didn’t enroll, nearly half said costs were the main reason.

That might be because they didn’t actually shop for a plan, the expense is new to them, they don’t value health insurance or they’re accustomed to charity care that can be free or deeply discounted, say Rice University’s Baker Institute and the Episcopal Health Foundation, which funded the study.

Obamacare premiums rose by an average 5.4 percent nationwide for 2015, according to consulting firm PricewaterhouseCoopers. The price increases are expected to slow, Scullary says.

Competition among health insurance companies and technical changes that affect how insurers compete “have added stability to the marketplace,” Collins says. That stability is supposed to contain costs.

An insurance broker informed me that I had only two options to make my health care more affordable: Change to in-network doctors or switch to a plan that includes some of my doctors but has a much higher premium.

I’m ignoring the broker’s advice. For now, I’ve decided to pay my doctors out of network, which I estimate will cost approximately $800 per year for routine, preventive care.

The silver lining is that I am healthy — and I’m grateful for that every day. If I had major medical issues, my calculations might be very different.