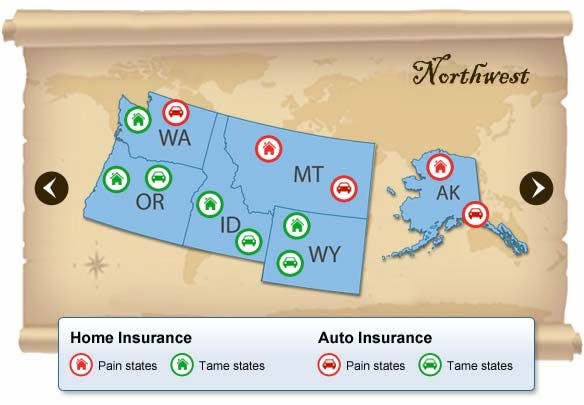 Alaska’s remoteness and extreme winter conditions contribute to its ranking as the nation’s 14th highest average home insurance premium at $856. In Montana, where the average annual home expenditure of $721 is well below the national average of $791, the pain may be due in part to its relatively low median income of $65,827.

Where auto rates are concerned, the three pain states all feature dramatic mountain ranges that turn treacherous in winter and long expanses of wilderness between major cities that lull drivers to sleep.

Montana has two problems: an annual traffic fatality total that’s almost double the national average and the highest drunken-driving fatality rate in the country, according to 2008 data from the NAIC. Are these risks related to its topography? The chances seem good.

“Montana is a big place where drivers hit the road for long stretches at high speed,” says Sullivan. “It’s easy to imagine a driver getting white-line fever and crashing with no one around to help.”