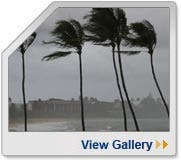 Natural disasters are stronger and costlier than ever — and experts aren’t so sure the United States economy is strong enough to easily shrug off the effects. But there are several ways individuals can be financially ready for a disaster.

Since 1980, the U.S. has been hit by 110 disasters, which each caused $1 billion or more in damage, including Hurricane Irene. The number of natural disasters to reach that billion-dollar mark within one year spiked to 10 in 2011, according to the National Weather Service.

Many experts point to Hurricane Katrina as a barometer of what could happen when the U.S. economy is affected by one region in chaos. In 2005, more than 200,000 jobs were lost in Louisiana, gas prices spiked across the country and there was a shift in overall spending, says Mike Schenk, vice president of economics and statistics for the Credit Union National Association.

The struggling U.S. economy in 2011 wouldn’t easily bear a storm like Katrina. “The bigger the storm, the greater the effect almost immediately on uncertainty and confidence in the marketplace,” Schenk says.

Jeff Lazo, economist at the University Corporation for Atmospheric Research, says it would take a “pretty major disaster” to send the U.S. into a double-dip recession or seriously stall recovery — and could even benefit some.

“We have so much diversity across the whole country that an impact in one area can actually be mitigated by or even be a benefit to another area,” Lazo says. “But it could definitely cause a severe local economic impact that may be sustained.”

A surge in disasters could cause a rise in insurance premiums, says Eli Lehrer, vice president of The Heartland Institute out of Washington, D.C.

“The disasters tend to significantly impact insurance premiums when they somehow result in a re-analysis of the likelihood of this sort of disaster,” Lehrer says. “For example, following Hurricane Katrina many of the agencies and regulators decided that the risk of a hurricane like Katrina occurring was greater than they had previously anticipated, so insurance premiums went up.”

How you can prepare

Many experts say the best way to prepare for all disasters — hurricane or flood, job loss or medical emergency — is to have a solid emergency savings fund.

The most important and simple way to get ready for a natural disaster is to have a plan, says Marianne DoranCollins, director of marketing for Plymouth Rock Assurance in Boston.

“If you prepare, if you make sure you mitigate all the risk to your property … hopefully you will not have a loss,” DoranCollins says. “If you don’t have a loss, your premiums probably won’t be increased.”

Meet with an insurance agent in your area and review what types of insurance you need according to where you live, she says. Many people don’t consider buying flood or wind insurance, which usually aren’t included in homeowners insurance. Earthquakes also are not usually included in standard homeowners policies.

Next, have all your important documents — identification material, bank information, home and car ownership proof, and anything else crucial — in one place. Also store these records on a flash drive that can be easily carried.

DoranCollins’ last piece of advice is to keep about $500 cash on hand because machines that process debt and credit card purchases are usually down after a disaster.

“You can’t plan for the unexpected,” DoranCollins says, “but we tell people to try to.”