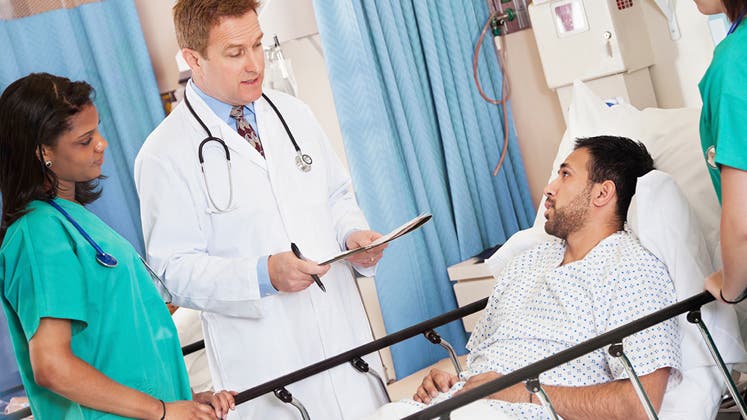 Our health care system is killing us.

Medical mistakes are said to be the third leading cause of death in the U.S., trailing only heart disease and cancer. Whether through physician error, “healthcare-associated infections” such as MRSA, or faulty implants or devices, an estimated 440,000 Americans die each year as an unintended consequence of medical care.

A recent outbreak of the superbug CRE linked to an unapproved medical device has been just the latest serious medical lapse to make headlines. The list has been growing.

Why so many medical mistakes?

How did American medicine drift so far from physicians’ legendary directive, “First, do no harm”?

Dr. Lucian Leape, a surgeon and adjunct professor of health policy at Harvard’s School of Public Health, has wrestled with medical harm for two decades — so long, in fact, that the National Patient Safety Foundation named an institute in his honor in 2007. He blames the rise in U.S. medical mistakes on two well-entrenched systems.

“The United States is the only country in the world that has a business-based health care system; everybody from the drug and insurance companies to the hospitals and medical-device makers is in it for the buck,” he says. “That’s fundamentally antithetical to the public good.”

The second source of trouble is what he describes as the U.S.’s 19th century medical culture. “The doctor being the head of everything breeds a culture of disrespect,” he says. “Getting doctors to take responsibility for their peers is part of the professional code. We just haven’t done it.”

Protect yourself from medical mistakes

In the face of so many health care errors, what’s a patient to do? Some tips from Lisa McGiffert, director of Consumers Reports’ Safe Patient Project:

A problem no longer in the shadows

Cases of medical care gone wrong have received more attention in the years since the National Academy of Science’s Institute of Medicine published its seminal 1999 report, “To Err is Human: Building a Safer Health System.”

Back then, the institute’s estimated annual death toll of 98,000 from hospital harm sparked a media storm and congressional hearings that many health experts welcomed as a long-overdue call to action. Since then, the Obama administration’s health insurance law, with its emphasis on medical outcomes and accountability, has further dragged medical mistakes out of the shadows.

“I think we’ve seen tremendous enthusiasm toward transparency,” says Dr. Marty Makary, professor of surgery at Johns Hopkins and author of “Unaccountable: What Hospitals Won’t Tell You and How Transparency Can Revolutionize Health Care.” “I think there’s a general feeling that, ‘Hey, we’re going to be measured in the future — why don’t we get ahead of this?'”

But consumer watchdogs say the brighter spotlight now being shined on the problem isn’t protecting patients.

“What we have is a system that feigns accountability, that gives the illusion of accountability but is not accountable at all,” says Lisa McGiffert, director of Consumers Reports’ Safe Patient Project. “You have doctors and patients who trust that this system is working, but it’s not.”

While patient advocates would like to see a federal agency — such as the Food and Drug Administration, Centers for Disease Control and Prevention, or Agency for Health Research and Quality — take the lead against medical harm, most concede it’s unlikely any of them will be given either the necessary funds or the mandate anytime soon.

“Everybody agrees it would be very, very helpful, but none of us think there’s much chance of that happening with the current political climate,” Leape admits.

Finding fault with the FDA

At the same time, some experts see federal agencies — particularly the Food and Drug Administration — as part of the problem.

Patient advocates insist the FDA’s arcane “510(k)” clearance process — which often allows a device similar to one already on the market to pass through, sight unseen — and a lack of post-market safety assessment undermine progress being made elsewhere to reduce medical harm.

“We just did a study of devices where we found a spinal implant that was approved — as ‘substantially equivalent’ to a dental implant. It’s still on the market!” says Diana Zuckerman, president of the nonprofit National Center for Health Research.

“Whose brilliant idea was it that this was substantially equivalent?” she asks.

So what is being done to prevent doctors and hospitals from harming us?

The American Hospital Association not only launched myriad safe-patient initiatives during the past decade, it also persuaded hospitals to publicly report quality and safety data.

That information is now available on Hospital Compare, a portal hosted by Medicare, where consumers can check for health care infection outbreaks and other adverse patient events at their local hospitals.

“All of these efforts are making an impact,” says Nancy Foster, hospital association vice president for quality and patient safety policy.

For example, she says a measure of what are formally called hospital-acquired conditions fell by 17 percent between 2010 and 2013. As a result, an estimated 50,000 deaths were prevented and $12 billion was saved.

Makary has similar high hopes for a new Johns Hopkins initiative called “Improving Wisely,” which will provide a tool for doctors to help other physicians measure up.

“We’re doing it with doctor wisdom, doctor to doctor. There are no regulators, no jail, no humiliation,” he says. “It empowers doctors by enabling them to crowdsource quality metrics and clean up their own house by finally addressing the outliers they all agree to be the problems within their specialty.”

Leape remains optimistic that medical mistakes can be contained in the same way as any treatable disease.

“This is a man-made problem and a man-correctable problem,” he insists. “We can do this. It’s just a matter of getting the will, getting the bad money out and changing the culture.”