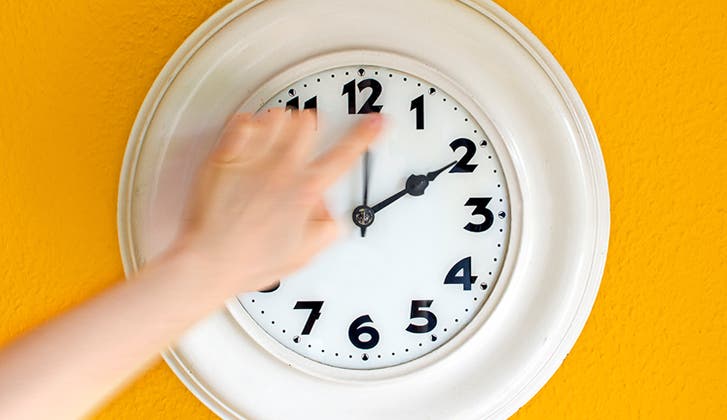 What type of person do you become when “springing forward” for daylight saving time forces your body clock to readjust? Do the earlier wake-up times turn you into a grumpier version of your usual sunny self?

Moving the clocks ahead, which happens on March 8 this year, may affect more than just your mood. Your decision-making skills could be altered, too, leading to several insurance risks.

Fatal car crashes increase 6 percent during the week after daylight saving time begins in the spring, according to a study by Austin Smith, a researcher at the University of Colorado-Boulder.

What could be the culprit? A lack of sleep, Smith says.

“The increased risk of a fatal vehicle crash suggests significant costs of sleep deprivation, even when undertaking a routine task,” Smith writes in the conclusion of his study.

This should be enough of an incentive to be careful on the road, says Amy Bach, executive director of United Policyholders, an insurance consumer advocacy group in San Francisco.

“People need to remember just how much an accident, small or large, can result in a rate increase on their auto insurance,” she says.

With the time change, your morning commute may start before the sun rises, so watch out for deer or other animals — and pedestrians, advises David Marlett, an insurance professor who chairs the department of finance, banking and insurance at Appalachian State University in Boone, North Carolina.

“That would be a collision loss and a liability claim if people are in the road or, God forbid, a kid is waiting for a bus,” he says.

The most important thing to remember is to refrain from getting behind the wheel if you’re tired, says Loretta Worters, spokeswoman for the Insurance Information Institute, a trade group based in New York.

“If you’re tired, your driving abilities are diminished and you’re more likely to be involved in an accident,” she says. “People need to get more sleep during (daylight saving time).”

Good time to think about home safety, too

When you’re taking part in the annual ritual of setting clocks forward, it’s also a good time to do your due diligence to prevent home insurance claims, experts say.

Replace the batteries on your smoke detectors, and do safety checks on the hoses on your refrigerator, washing machine and other appliances, Worters says.

Check your property for trees damaged by the winter’s snow or ice, Marlett says. “Any fallen trees that have hit your house would, of course, be covered by insurance, but you’d be better off if you could prevent it and remove any damaged trees ahead of time.”

Additionally, complete a home inventory to prepare for the tornado and hurricane seasons that follow daylight saving time.

“If your house is totally destroyed, you have nothing to prove what was there,” Marlett says. “These days, it’s so simple: You just get your iPhone out and snap some pictures or take video, and you can upload to the cloud. It’s nice and safe.”

Daylight saving time hits some of us hard — it can take up to two weeks to adjust, research suggests.

This underscores the importance of taking safety precautions, not only at home and on the road, but also on the job.

American workers lose 40 minutes of sleep, on average, after the time change, and the number of workplace injuries jumps nearly 6 percent, according to two studies by researchers at Michigan State University.

“These findings beg for immediate attention given to employee schedules, sleep and safety, because, as this study reveals, daylight saving time may save daylight, but not without painful costs,” researchers Christopher Barnes and David Wagner write.

Safeguard your well-being — and wallet

If you’re part of a majority of Americans, the spring time change seems like a different kind of March madness, even if it means more sunshine time.

Only a third of Americans see the value in daylight saving time, according to a survey by Rasmussen Reports, a polling firm. The percentage has been declining every year.

As you prepare for the time change, make it your mission to play it safe after the clocks are moved forward, so you’ll avoid losses and insurance claims.

“It shouldn’t be this way, but insurers are really penalizing people for using their coverage by raising their rates,” Bach notes.

“Make sure you have the right amount and type of coverage.”