A health navigator helps with Obamacare and more 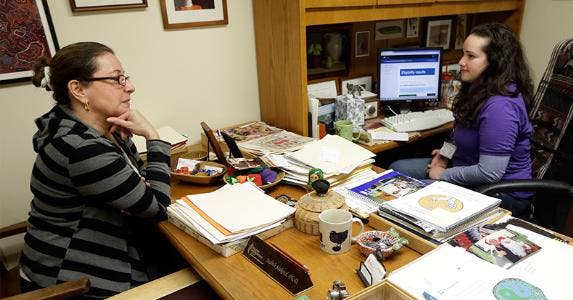 The Affordable Care Act has proven both a blessing and a curse for navigators, one of the top trending professions in health care today.

Elisabeth Russell, president of the trade group National Association of Healthcare Advocacy Consultants — or NAHAC — founded her practice, called Patient Navigator, in the Washington, D.C., area a decade ago. She says health navigator confusion set in shortly before the debut of the Obamacare exchanges.

“I’ve gotten so many calls from people asking me to pick out health insurance for them. I explain that while I can do that, I’m not an Obamacare insurance navigator,” she says. “When the government contractors who train those navigators approached us, we said, ‘Please call it something else.’ But it was already in the legislation.”

Joanna Smith, who founded NAHAC and is the CEO of Healthcare Liaison in Berkeley, California, predicts patient navigators will ultimately benefit.

“People still say, ‘So, what is it you do?’ but now it’s becoming clearer,” she says.

According to the American Cancer Society and other groups, health care navigators trace their origin back to Dr. Harold Freeman, who established the nation’s first patient navigator program in 1990 at New York’s Harlem Hospital Center. A decade later, Smith, a trained social worker and hospital discharge planner, expanded navigation beyond cancer patients.

“I could see that when we discharged people, we didn’t know what was happening with them unless they showed up back in the emergency room. We had no feedback loop,” she recalls. “That got me thinking: What if there were one person who could follow someone everywhere they went and work directly for the client?”

Soon, Smith and Russell made contact with other like-minded professionals, and an industry was born.

In 2010, the idea was expanded as the Affordable Care Act created its brand of navigator to help consumers understand the law’s new health care options.

The duties of navigators

Patient navigators work closely with their patients as informed advocates and guides through our often fragmented health care system.

Some navigators, like Smith, accompany their patients on their rounds to various health care providers and hospitals, asking the tough questions and carrying an up-to-date electronic list of medical records, medications and physician notes. Others coordinate with a central team of specialists that can include physicians, translators, lawyers and other professionals.

Obamacare navigators help consumers fill out eligibility and enrollment forms and otherwise find their way around HealthCare.gov and the individual state exchanges.

The health care law requires the navigators to provide “fair and impartial” information about health plans offered in the exchanges and about Obamacare’s income-based tax credits that can reduce the premiums.

What does a navigator cost?

Smith estimates there are currently 22 patient navigator practices around the country. Their fees range from $65 to $200 per hour for a wide range of services, including care coordination, medical research and insurance resolution.

While health insurance typically does not cover those fees, some navigators find ways to save their clients more than they spend out of pocket. Russell, for instance, recently persuaded a hospital to cut its fees by 50 percent, allowing her uninsured client to save $16,000 and stave off bankruptcy.

As for the cost of Obamacare navigators, their services are provided free for consumers, according to HealthCare.gov.

Patient navigators have not always been welcomed with open arms into every hospital ward and doctor office they visit at their client’s side.

Russell says that’s not surprising, given the open-ended nature of their services and the fact that most doctors have yet to encounter a navigator. Compounding the issue, hospitals and larger medical practices are developing their own in-house navigators to help improve patient outcomes, a key to higher financial returns under Obamacare.

“That’s the hardest nut to crack,” she admits. “You would think they would love to know they can hand a patient over to someone like me to make sure everything goes OK at home, but the medical people are really kind of suspicious and defensive at first.”

Meanwhile, Obamacare navigators have encountered their own static, particularly in states where the law has run into political opposition. More than a dozen states have placed restrictions on the navigators, according to health care research organization The Commonwealth Fund.

Navigators are here to stay

“I can see a role for them, to coordinate care, avoid duplication of services and help with cultural and language barriers,” he admits.

“Look at life coaches — this is exactly the pattern they went through,” she says. “In the beginning, anybody could call themselves a life coach; now they have four different credentials.”

Meanwhile, a rule issued by the Centers for Medicare & Medicaid Services has promised updated standards for the army of Obamacare navigators. At the same time, the agency indicates that it plans to address state laws that it says are making it difficult for the navigators to do their jobs.