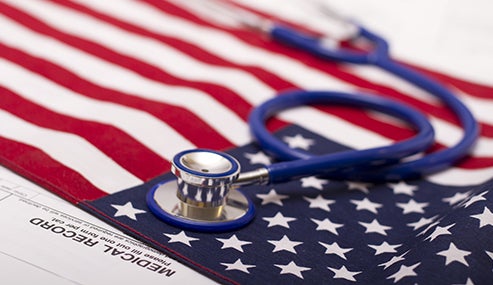 Should Obamacare be scrapped?

When asked whether President Barack Obama’s landmark Affordable Care Act, which has been the law of the land since March 2010, should be halted by Congress or be allowed to continue, Americans were evenly split at 46 percent for and 46 percent against repeal, with 9 percent undecided or nonresponsive.

The survey confirms the ongoing political split over Obamacare, with 79 percent of self-identified Republicans favoring repeal and 74 percent of Democrats saying the law should be kept in place.

Perhaps as a result of the ongoing political battle for hearts and minds, a rising percentage of Americans reports feeling “more negative” toward Obamacare’s impact on their own health care. They now lead those who feel “more positive” by 31 percent to 11 percent, or nearly 3 to 1. Last month, the ratio was 2-to-1, with 28 percent feeling more negative about the law’s effect on their health care and 14 percent feeling more positive.

Bankrate’s second monthly Health Insurance Pulse survey was conducted Sept. 19 to 22 by Princeton Survey Research Associates International with a nationally representative sample of 1,003 adults living in the continental United States. The margin of sampling error is plus or minus 3.6 percent.

Health reform resistance is nothing new

Health reforms have always met with resistance, asserts Tim Jost, a professor of law at Washington and Lee University. In the 1960s, the legislation creating the Medicare program for seniors and the Medicaid “safety net” for low-income Americans was opposed as “socialized medicine” by many hospitals, doctors and even the American Medical Association.

“Only six states participated in Medicaid when the program went into effect in 1966,” Jost points out. It took more than a decade for all states to come on board.

In 2003, opponents of the Medicare Part D prescription drug benefit said the plan was too confusing for seniors.

But Jost says the ongoing campaign in Congress to delay, defund and possibly even default Obamacare out of existence is unprecedented in American politics.

“Previously, there were a lot of debates about policy, but there wasn’t an attempt to undermine it. In fact, the opponents of Medicare/Medicaid went to their constituents and said, ‘This is what the law is and this is how you take advantage of it.'” Jost says. “There wasn’t the same kind of widespread misinformation and layers and layers of obstruction and opposition.”

J. Robert Hunter, director of insurance for the Consumer Federation of America, says the complexity of the Affordable Care Act, combined with its hands-off approach to the employer group plans that insure most Americans, left plenty of room for opponents across the political spectrum to sow the seeds of doubt.

“Even I’m split, personally,” says Hunter, who feels Obamacare doesn’t go far enough toward a universal coverage, or “single payer,” system. “I think we probably ought to keep Obamacare, but I’m probably 51 to 49 (percent).”

He agrees with Jost that opponents of health insurance reform have been intentionally misrepresenting the law.

“It’s been so hyped up as Frankenstein’s monster, and it isn’t,” Hunter says. “It’s not as great as some of the people are touting it, but it’s nowhere near as bad as some of the things I’ve heard, where you’d almost think it causes cancer.”

Jost advises Americans to tune out the noise and give reform a chance.