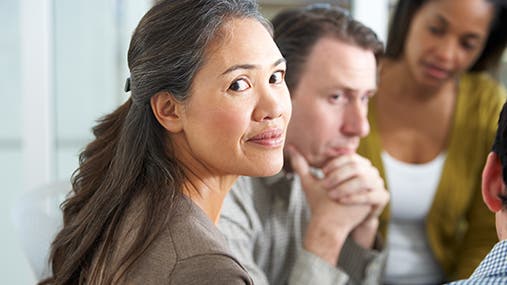 Would you mind if a dozen total strangers sat in on your next doctor visit?

While shared medical appointments may seem like a radical departure from traditional one-on-one care, they’ve made steady inroads into primary care practices since the model was introduced in the early 1990s. The American Academy of Family Physicians estimates that the number of family physicians using group doctor visits doubled in five years, from 5.7 percent in 2005 to 12.7 percent in 2010.

Instead of getting the standard 15 minutes of face time with their physician, patients with similar medical issues who are willing to meet en masse can spend their usual health insurance copayment and receive up to two hours of advice on how to cope with their condition from their doctor, the doctor’s medical staff — and each other. Attendees must sign a confidentiality waiver, however, to ensure that what happens in group stays in group.

As in a traditional office visit, patients have their vitals taken, review their progress toward health goals, and receive shots, tests and medication refills as needed. Unlike in an office visit, they’ll learn far more by listening as others share experiences and ask questions they might never think to ask during a typical “Hi, gotta fly” speed date with their physician.

Dr. Ed Shahady, medical director of the Diabetes Master Clinician Program at the Florida Academy of Family Physicians Foundation in Jacksonville, Fla., has conducted group visits and taught the group model to more than 100 practices during the past decade. He says the group dynamic works best for patients with chronic diseases such as diabetes, high blood pressure, high cholesterol and obesity-related conditions that require difficult-to-maintain lifestyle changes.

“For patients who just can’t get to goal, we needed a different methodology,” he says. “In a one-on-one visit, I’ve already told them everything 20 times. In a group setting, when someone is having trouble, I’ll say, ‘Let’s ask other people in the room what they do.'”

The role of the physician changes in a shared appointment, he says. “Chronic disease requires a lot of patience, motivation and skills. You put those patients in a group visit and it’s almost magical what happens.”

Are some patients hesitant to open up in a group setting?

“Yeah, for at least 22 seconds!” Shahady chuckles. “By the time I come in, they’re talking about their sex lives, about getting mad at their husband or wife, everything!“

Not only do most patients who try group visits return, their health may improve as a result. A 2010 Italian study found that patients with Type 2 diabetes who attended group visits had better readings for blood pressure, cholesterol, body mass index and other health indicators than those who received one-on-one care.

Ed Noffsinger, a Santa Cruz, Calif., health care consultant who pioneered shared medical appointments about 20 years ago after contracting a chronic condition himself, says doctors were slow at first to embrace his group models.

“There was quite a bit of resistance; physicians were already overwhelmed by so much change, and this was too great of a paradigm shift,” he recalls. “But by about 2002, it really changed. Now, the major obstacle is keeping doctors and medical groups from rushing off half-cocked and doing (group visits) without designing them properly with the right personnel.”

Noffsinger’s models are designed to run like a series of one-on-one office visits, only with observers. Because of that, doctors can bill — and health insurance companies will pay for — a full office visit for each group attendee.

“The setting doesn’t matter — it can be an exam room, a group hall or a ‘doc-in-a-box’ at your local Walgreens or Costco,” Noffsinger says. “What matters is the care delivered and documented.”

The group-visits connection to Obamacare

He’s proudest of introducing the concept of a documenter who takes chart notes for the whole group, freeing the physicians to do what only they can. “Did you ever wonder why we have the most expensive resource in the system (the doctor) doing what the least expensive resource could do?” he asks. “That’s the major reason groups are so efficient.”

The timing of Noffsinger’s group breakthroughs couldn’t have been better. Nearly 50 percent of all adults in the U.S. suffer from chronic disease, which accounts for 7 out of 10 deaths nationwide and consumes 75 percent of our health care dollars, according to the Centers for Disease Control and Prevention.

The aging of the baby boom generation and the millions of Americans expected to sign up for health insurance under the Affordable Care Act are expected to leave America short about 150,000 doctors in the next 15 years, according to the Association of American Medical Colleges.

But Dr. Dennis Saver, a Vero Beach, Fla., primary care physician and past president of the Florida Academy of Family Physicians, expects the private office visit to remain the dominant form of health care delivery.

“Group visits are really powerful and deserve a wider application. They have a special role,” he says. “But I don’t think they’re going to become the new norm, nor should they. For things like acute care or common ailments such as colds and flu, they just don’t fit.”