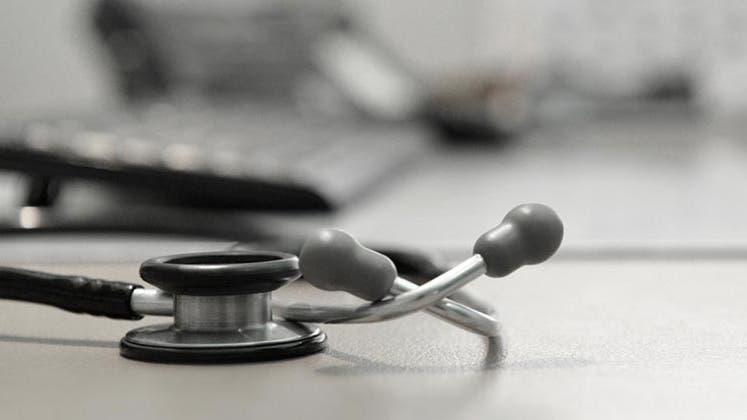 An American hoping to retire soon can look forward to spending more than a quarter of a million dollars on health care over the rest of his life. People who are young now will probably spend a lot more than that.

That’s just a base line: The couple of hundred grand you’ll drop on health care does not include extras such as dental care, vision and hearing.

How much will health care cost in retirement?

The total amount spent on health care for the average American varies, depending on whom you ask and how long you may live.

The average lifetime cost for health care for a couple retiring in 2015 will be $266,589 according to HealthView Services, a company that provides health care cost-projection software to the financial services industry. Fidelity Investments puts the number at $245,000.

Keep in mind that these estimates are just a starting point. Folding in the total health care expenses a couple faces, including dental care, vision, copays and assorted out-of-pocket expenses, brings total retirement health care costs to about $395,000, according to HealthView Services. 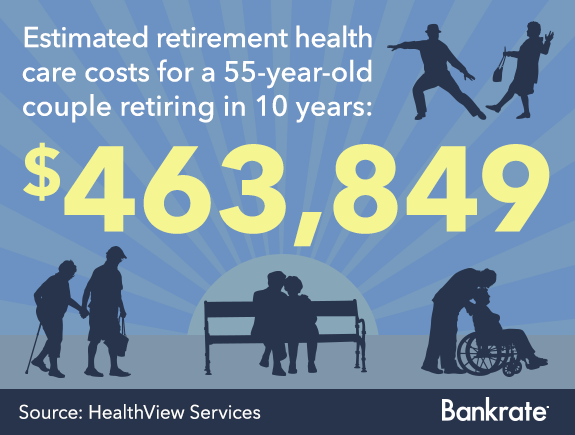 Some variables such as health and luck can influence the cost. But longevity is the wild card. “How long you’re going to live is probably the biggest uncertainty there is,” says Paul Fronstin, director of the health research and education program at the Employee Benefit Research Institute, or EBRI.

Those who aim for the average have a 99% chance of being wrong, he says.

Why is health care so expensive?

The estimates for retirement health care costs factor in a few assumptions — mainly, that people buy insurance. That assumes the couple is paying for Medicare parts B, D and a supplemental insurance policy or Medicare Advantage, known as Part C. All that insurance isn’t cheap, except for Part A of Medicare. It charges no premium for people who worked, as well as their spouses.

“It covers hospitalization. It’s free because you’re not paying a premium, but you’re paying it while you’re working,” says Ron Mastrogiovanni, president and CEO of HealthView Services.

Basics provided by A and B can be pricey

Part A of Medicare is paid for by payroll taxes during your working years. Consumers who didn’t pay this tax pay a premium of up to $411 per month in 2016 for the hospitalization coverage provided by Part A.

A deductible must be met. In 2016, the deductible is $1,288 for the benefit period, which Medicare whimsically describes as a “spell of illness.” There’s no coinsurance payment for the first 60 days of hospitalization. The benefit period stretches from the time you enter the hospital until 60 days after your discharge. If you need to go back into the hospital within the 60 days, you won’t need to meet a new deductible.

After the first 60 days of hospitalization, coinsurance payments increase significantly to $322 per day.

Part B of Medicare covers the nuts and bolts of health care, such as doctor visits, lab tests, preventive services, ambulance rides and medical supplies such as wheelchairs.

And these retirement health care costs will likely increase incrementally each year.

Rx: The price of what the doctor ordered

Prescription drugs are one reason people are living much longer these days. But those drugs sometimes come at a steep cost. The price of insurance coverage for drugs can also land a hefty wallop on a budget.

Known as Part D, prescription coverage enrollment is voluntary. Most Medicare prescription drug plans provide benefits up to a certain dollar amount. After that, policyholders fall into the so-called doughnut hole.

“Up until the Affordable Care Act passed, we had something called the doughnut hole. The insurance company would pay for the first several thousand dollars of prescription drug costs with copayments from the policyholder,” says Mastrogiovanni.

“After that several thousand dollars, coverage stopped, and you were paying 100% until the other milestone kicks in and catastrophic insurance coverage from Medicare takes over,” he says.

Though the Affordable Care Act is moving to close the gap in coverage, the doughnut hole isn’t scheduled to go away entirely until 2020.

Why are drugs so expensive?

Drug companies can essentially charge whatever they want for drugs. Though other countries negotiate drug costs, generally, the U.S. doesn’t.

“Our laws prohibit Medicare to negotiate with drug companies. There are parts of the government that get some deals. For instance, the (Department of Veterans Affairs) does some negotiation, and Medicaid gets the lowest rates for some of the drugs that are widely taken by older adults,” says Debra Whitman, chief public policy officer at AARP.

“Medicare gets the full price even if they are the major buyer. There are huge differentials between what Americans pay and what is paid in other countries,” she says.

Even just ponying up the copayments on some pricy drugs can be enough to break the bank for some retirees.

For instance, the drug Solvadi has been a breakthrough near-miracle treatment for hepatitis C. But a full course of treatment costs $87,000.

And don’t forget about long-term care

A nursing home stay, a universally dreaded catastrophe, is a big cost that no one includes in their estimates of the cost of care. “A private room in 2015 cost over $91,000,” Whitman says.

Only a small fraction of those who need long-term care actually go to a nursing home for an extended period of time. Millions of people stay at home getting care from friends and family.

“There are 43 million family caregivers helping out family, a friend or a neighbor,” says Whitman. “The total cost would be $470 billion if we had to put an economic value on it,” she says.

What can a retiree do?

Staying as healthy as possible is one way to mitigate retirement health care costs. And one way to do that is by being an informed consumer of health care services.

“Discuss treatment options, and understand what is necessary care and what are the things you can try first. For instance, going to physical therapy for back pain, not just going straight to surgery,” Whitman says.

The Leapfrog Group’s website, HospitalSafetyScore.org, grades hospitals based on safety problems related to surgery, staff members and infections. “The last thing you want to do is get a hospital infection and then have to pay for that,” says Whitman.

Retirees must walk the fine line of being informed patients and undergoing only necessary treatments. At the same time, they should not skimp too much, lest they incur more health care expenses from neglecting their health in an effort to save money.