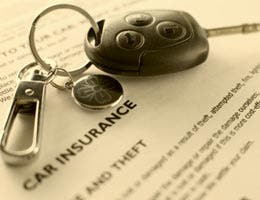 Let’s face it, car insurance policies are about as exciting as Hello Kitty Snuggies.

Chances are you haven’t even read your auto policy cover to cover, unless you did so in a desperate move to lullaby a colicky child to sleep.

But this year, five new car insurance offerings hit the streets with enough thunder to wake the masses.

Two of these hot new products kicked off with equally funky national TV campaigns — the commercials are for Vanishing Deductible from Nationwide Insurance, in which an insurance spokesman vanishes, and Better Car Replacement from Liberty Mutual, in which a guy peels away a wrecked car to reveal a new car underneath.

Two other innovative products — pet injury coverage from the Chubb Group of Insurance Companies and Mobile Food Vendors Insurance from Whorton Insurance Services — fill a very real insurance need that has never been met before.

Finally, you would had to have witnessed the annual spontaneous artistic combustion in the Nevada desert known as Burning Man to fully appreciate the unique challenges of Heffernan Insurance Brokers’ insurance program for Burning Man participants.

Shrinking deductibles, equal auto protection for pets, props for our favorite taco wagons, a guaranteed newer car and coverage for whatever weirdness might happen at Burning Man?

What’s not to love? 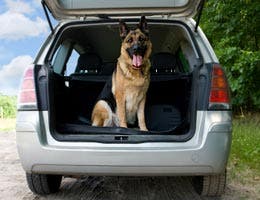 When you load up the van with Fido and the family, one of you isn’t covered. Guess which one.

To rectify this industry oversight, Chubb Group of Insurance Companies now offers $2,000 in pet injury coverage as part of its standard auto policy at no additional cost to customers. Coverage is available in Arizona, Maryland, Texas and New Jersey so far.

The policy pays up to the claim limit to treat, board, euthanize and replace your pet if it is injured or killed in a crash. It even covers horses in trailers.

“We have a lot of customers who have pets and love their pets,” says Chubb spokesman Dave Hilgen. “The distinction is it will cover any animal that isn’t used for business or profit. If you have a race horse and you’re taking it to the track, it wouldn’t cover that. It has to be a pet.”

“The bottom line is, it’s difficult to get a lion sitter if you happen to have a lion, so sometimes you have to take that lion with you,” he says. “If it’s a pet, it’s covered.”

How to make your deductible vanish 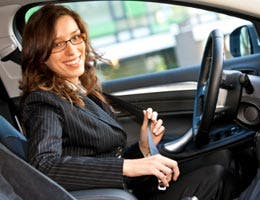 If you’ve never filed an accident claim, why should your deductible remain the same?

Now it doesn’t have to. Nationwide’s Vanishing Deductible program will lop $100 off your deductible for every year of safe driving, up to a maximum deduction of $500, for preferred auto customers only. New program enrollees receive an immediate $100 deduction.

How do you qualify for preferred at Nationwide? “You need to maintain auto insurance for at least six months, have fewer than two at-fault accidents and fewer than three moving violations (aka, tickets) with no ‘major’ offenses such as a DUI,” says spokeswoman Elizabeth Stelzer.

“A safe driver is someone who does not have an at-fault accident,” she says. “Not-at-fault accidents and moving violations do not impact the earning of our Vanishing Deductible.”

The Vanishing Deductible magic act is available to preferred auto policyholders in all Nationwide states except North Carolina for a cost of $30 for the first vehicle on your policy and $5 for each additional vehicle. The fee is charged every six months at renewal.

The deductible credit can be used multiple times throughout the policy period and on all types of claims, including at-fault, not-at-fault and glass damage, Stelzer says.

Affordable coverage for food on the move 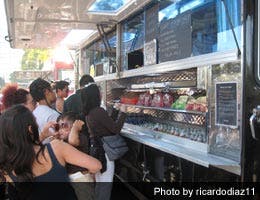 Mobile food vendors are all the rage today, with menus that extend well beyond tacos and tamales to fancy fare such as lobster and gourmet cupcakes. There are estimated to be 8,000 to 10,000 rolling restaurants in Los Angeles County alone and 10,000 between Dallas, Houston and Austin, Texas, according to Ron Ortega, program manager of Whorton Insurance Services in Austin.

That just didn’t taste right to Ortega. So he developed the nation’s first Mobile Food Vendor Insurance, or MFVI.

“Costs vary by state and region, but on average, premiums range from $2,500 to $3,500 for $1 million to $2 million general liability and $1 million auto liability, including physical damage on a stated amount basis,” Ortega says.

“What’s fueling this industry is its popularity, convenience and affordability in tough economic times, spiced up by social networking,” says Ortega. “People love it and want more of it.”

Car totaled? Replace it with a better one 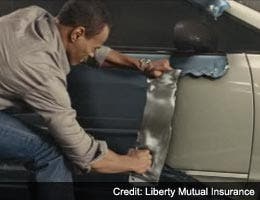 Depreciation doesn’t just affect the resale value of your new car. It also has an impact on the insurance money you’ll receive if you total it.

Liberty Mutual feels your pain, and includes new-car replacement as part of its standard auto coverage. If you total your new car within a year of owning it and within its first 15,000 miles, they’ll give you the full value minus any deductible.

The idea was so popular that they dreamed up Better Car Replacement for customers who don’t drive this year’s model. The optional coverage, which costs on average $60 per year, is now available in all states except Kentucky and North Carolina. 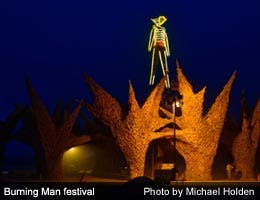 Woodstock with open-road vehicles — what could possibly go wrong, right?

Enter coverage for Burning Man participants, offered for the first time by California-based Heffernan Insurance Brokers. For a premium of $500 to $850, the policy provides property and liability coverage for claims against participants in a theme camp, art car or artistic installation at Burning Man, from setup to breakdown.

Heffernan’s Amy Vitarelli and Ben Stern spent two years developing the unique coverage. “As ‘burners’ ourselves, we know the risks inherent in an event like Burning Man,” Vitarelli says.

They’re also aware of the irony.

“There is no insurance requirement; that would be very un-Burning-Man-like for the organization to require anyone to purchase insurance,” she says. “When you say insurance and Burning Man, it’s like this oxymoron — like wait, those things go together?”