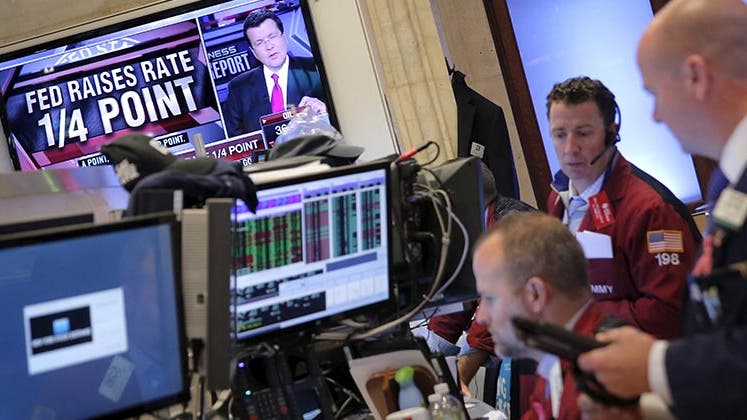 The ugly start for the year on Wall Street has not provided any incentive for the Federal Reserve to speed up its schedule for raising interest rates.

After increasing rates in December for the 1st time in nearly a decade, the Fed indicated that there will be “gradual” increases in 2016. Gus Faucher, senior economist at PNC Financial Services Group, says most Fed watchers interpret that to mean a 1% increase, or 4 hikes of 0.25% each, over the course of the year.

But there is almost no expectation that the next move will come at the year’s 1st meeting of the policy-making Federal Open Market Committee, or FOMC, which takes place Tuesday and Wednesday.

“In particular, given the events of the last few weeks and the data we’ve gotten, I think that makes it even less likely,” Faucher says.

Ryan Sweet, director of real-time economics at Moody’s Analytics, echoes that thought. “Any good economist would not say the odds are 0,” he said. “But I am 99.9% certain they are not going to raise rates in January.”

If those predictions hold and rates remain where they are, consumers looking for low-cost mortgages, along with anyone holding adjustable-rate mortgages or credit cards, will be among the beneficiaries.

The small increase the Fed put through in December already has had a slight negative effect for borrowers, notes Joel Naroff, president of the consulting firm Naroff Economic Advisors. “The prime rate went up about a nanosecond after the announcement,” he says.

Still, loan rates in general remain historically low. “Interest rates are barely above 0 still, even after the Fed raised them in December,” Moody’s Sweet says. It will be some time before increases reach the point where they have a significant impact on individuals looking to borrow money.

“Next year, they’ll be much more aggressive, and that’s when I think consumers will feel the sting,” he says.

On the flipside, banks did not lift the interest rates they offer to their customers who hold savings accounts following the December meeting — also no surprise, according to Naroff, who says it will take at least 1 more rate hike before savers start sharing some of the gain. “After the next move, I think banks will probably start giving back part of that.”

While the consensus is that it’s more likely the next increase will come at the FOMC’s March meeting, the Fed will watch the economy before sealing that decision.

“Raising interest rates marks a significant milestone in this expansion, because it reflects the fundamental strength of the U.S. economy,” Jeffrey Lacker, president of the Federal Reserve Board of Richmond (Virginia), said of the December hike in a mid-January speech on the prospects for the year.

Lacker said he expects the economy to keep growing at around 2.2% this year, as it has since the end of the recession, and to keep adding jobs. Modest wage growth should help push consumer spending higher, but there is still uncertainty, he said, which could slow the Fed’s plan for rate increases .

One big factor is inflation. The FOMC aims for inflation to be about 2%, but falling energy prices and the rising value of the dollar have kept it below that target.

Even stripping out food and energy prices to look at “core” inflation, it is at about 1.33% percent. And “there’s no indication that core inflation is going to pick up anytime soon,” PNC Financial’s Faucher says.

The price of oil is a big factor in keeping inflation low, because it has ripple effects on everything from the price of airline tickets to the cost of shipping goods to stores around the country. The Fed will be keeping tabs on this volatile market.

Oil prices have seen their lowest levels in 12 years, below $30 per barrel in international trading. The sharp drop in the past year is a boon to consumers filling up their gas tanks. Gasoline is averaging less than $2 per gallon nationwide, according to AAA, its lowest price in a decade.

But overall, “a little inflation in the economy is good,” Sweet explains. That’s because consumers will spend more if they think prices will rise, whereas they’re likely to hold off on purchases if prices seem to be falling and there’s a better bargain down the road. Gradually increasing prices also encourage businesses to increase wages, he says, “which we desperately need.”

The stock market’s terrible start to the year, with the Dow Jones industrial average and S&P 500 both approaching the lows seen in August, largely reflected concerns about stalling growth in China, the world’s 2nd-largest economy.

“There is a lot of uncertainty in global financial markets right now,” Faucher says. That will be another factor in the Fed’s decision making. “They certainly don’t want to add to the volatility we’re seeing in financial markets.”

But while the yo-yoing market indexes are on the Fed’s radar, they are not likely to be a determining factor for interest rates.

“The last thing they want to start doing is raising the idea that monetary policy is once again going to be driven by equity markets,” Naroff says, adding that the frequent fluctuations make the markets an unreliable gauge of the overall economy. “We don’t know what the market’s going to look like a week from now.”

The only political polls that really matter this year are nearly here. The 1st votes in the presidential race are set to be cast in the Iowa caucuses on Feb. 1 and in the New Hampshire primaries on Feb. 9.

But even as politicians in both parties campaign on what’s wrong with the economy, the Fed is likely to shut out the election-year noise when making its decisions.

“You have a Fed chair who’s been arguing to keep politics out of Fed behavior,” Naroff says. “If they don’t do something they need to do because of politics, then they are admitting that politics has something to do with Fed behavior.

“The reality is, if the Fed needs to do something, they will,” he says.

It’s just not likely they’ll do anything right now.