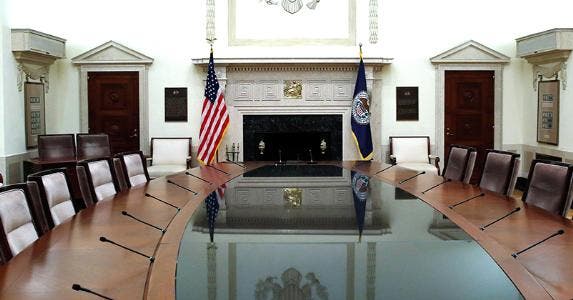 Financial markets will anxiously monitor this month’s powwow of Federal Reserve policymakers for any whispers about when the central bank will make its first interest rate hike since 2006. But Fed-watchers say investors can relax and pull their ears away from the door, as this meeting will likely be a quiet one.

The Federal Open Market Committee is expected to stay the course, meaning the central bank should continue to wind down its economic stimulus program of bond buying while searching the horizon for glimpses of where the economy is headed.

What it won’t do at this meeting or the next one, observers say, is rock the boat.

“This is going to be a pretty tame Fed meeting,” says Paul Edelstein, U.S. economist with IHS Economics. “I don’t think that’s going to change until next year.”

Certainly, the Fed has some big decisions to make, says David Nice, an economist with Mesirow Financial.

At some point next year, the Fed is expected to begin raising interest rates off the ultralow levels it has maintained since the 2008 financial crisis. It will have to decide exactly how to go about raising rates while staying alert for inflation and other signs of economic and financial market instability.

But for now the markets have been fairly stable, and the Fed does not appear likely to change its view that the economy is climbing back at a “moderate” pace and won’t need the support of rock-bottom interest rates for too much longer.

“They don’t want to take steps to tighten the economy right now,” Nice says. “They’re not at any point at which the sum of the indicators is going to make them move. But when they do eventually move, then it won’t be easy.”

Fed Chair Janet Yellen has said that the timing of interest rate hikes will be “data dependent,” which means that the July 29-30 meeting will feature, as usual, members poring over different indicators to get a better sense of how the economy is faring.

Employment measures will continue to be key among those indicators. While the unemployment rate has been dropping faster than expected, other less encouraging jobs indicators also are being watched closely by the Fed — including low labor force participation, slow wage growth and stubborn long-term unemployment.

Yellen has said that slack in the labor market will cause the Fed to tread carefully as it approaches rate increases.

In addition, the FOMC will likely be eyeing the housing recovery, as well as manufacturing, Nice and Edelstein say.

“(Yellen is) going to calibrate her approach based on a basket of numbers, not just one,” Nice says.

Looking to the future

The point of all the data-watching is to get a better sense of what the economy may look like in the second half of this year and beyond, says Edelstein.

“It really kind of comes down to: Are things picking up enough to convince them to raise interest rates in the first half of next year? Or are things still sort of slow?” he says.

The key word for this month’s meeting will be gradualism, Nice says.

The FOMC wants to do “the opposite of shocking the economy,” he says, adding that the Fed is already going the gradualism route with its tapering of asset purchases.

The Fed has gone through three rounds of quantitative easing in an attempt to stimulate the economy, buying up bonds in order to pump money into the system. As the economic outlook has improved, the Fed has slowly cut back on its monthly asset purchases.

“Even though the economic figures have come in pretty good,” the pace of the taper has stayed steady and gradual, Nice says.

Adds Kathryn Dominguez, a professor of economics and public policy at the University of Michigan: “It would be hard to make a strong case at this point that the economy is roaring out of a slow recovery,” so continued gradualism is key.

“They’re extremely nervous about changing course too quickly,” she says. “They’re nervous about putting the brakes on what is a very muted recovery relative to what we’ve seen after past recessions.”