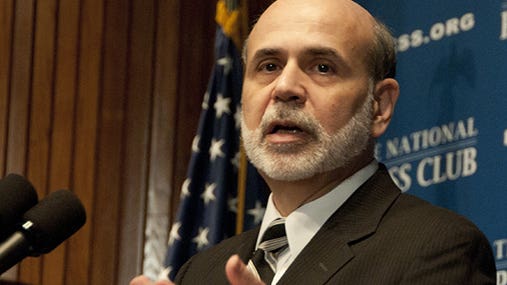 The year’s last meeting of the Federal Open Market Committee, wrapping up Wednesday, promises to be light on monetary policy changes. Though the central bank is unlikely to change course at the moment, the statement released after the meeting, or at the following news conference, may offer clues to the central bank’s intentions for 2014.

The world awaits news about the Fed’s $85 billion per month in bond purchases. The central bank has been vacuuming up $45 billion in Treasury securities and $40 billion in mortgage-backed securities every month for the past year in an effort to keep interest rates low and kick the economy into high gear. Ending the program will have global implications, and removing the support of billions of dollars of stimulus has to be done in just the right way. It’s economic Jenga, basically. Instead of useless wooden blocks scattered all over your living room after a careless error, it’s potentially the future prosperity of an entire generation.

“If we are to see the beginning of the taper in the first half of next year, which I think is possible, the Fed would need to start with a road map to allow the markets to better prepare and diminish uncertainty to some degree,” says Andrew Thrasher, investment analyst for Financial Enhancement Group in Anderson, Ind.

The official stance on ending the stimulus program is that the central bank will do it when the time is right and the recovery has strongly taken hold. Is the economy strong enough to stand on its own? It’s debatable.

The unemployment rate fell to 7 percent in November. Plus, more than 200,000 jobs were added to American payrolls.

But “the average over the last three months is 190,000; over the past six months it is only 180,000,” says Lee McPheters, research professor of economics and director of the JPMorgan Chase Economic Outlook Center at the W.P. Carey School of Business at Arizona State University.

“I don’t think the Fed is going to put a lot of weight on the most recent number. The accumulated performance from labor markets has been sluggish, even though we have one good number from November,” he says.

In keeping with the dual mandate to maximize employment and keep prices stable, the central bank is preoccupied with inflation. Probably with good reason — inflation as measured by the Consumer Price Index fell 0.1 percent in October, the last month for which data has been released. Over the past year, the all-items index is up only 1 percent. Shaking out food and energy prices from the index, inflation is up 1.7 percent year over year.

But that is still too low. The central bank is targeting a 2 percent inflation rate. Recent monetary policy statements have indicated that the rate-setting committee is concerned about prices; panelists do think inflation will pick up in the near future, but it’s not there yet.

“I don’t think it is logical to pull away just yet. The reality is that there is no inflation. That is really the issue now,” says Michael Gayed, CFA, co-portfolio manager of the ATAC Inflation Rotation Fund, or ATACX.

Though the prices on consumer goods and services aren’t increasing as briskly as economists would like, stock prices are through the roof. There’s starting to be evidence that this is not altogether a good thing.

“Looking at the data, who has it helped? QE has inflated markets and created a divide between the wealthy and working class. If you’re in the top 15 or 20 percent and have some money in the bank, then QE has been good for you. If you’re not, it hasn’t done anything for you,” says Lance Roberts, CEO of STA Wealth Management in Houston.

Besides stock prices, it’s difficult to point to consistent economic growth stimulated by the latest round of asset purchases. Instead, the central bank has gotten itself into “a liquidity trap, suppressing interest rates to keep economic growth up,” Roberts says.

To get out of this cycle, the Fed will have to figure out how to talk up markets while clearly communicating its intentions to avoid stepping on whatever economic growth is present. When that will actually begin in earnest is anyone’s guess.