When he was saying ‘You’re fired’ more than ‘yuge,’ Trump talked with Bankrate 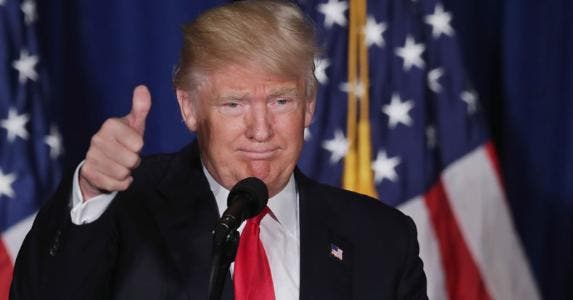 Presumptive Republican presidential nominee Donald Trump may not be the richest man in the world — Forbes’ list of billionaires ranks him 324th. But his words are likely being followed more closely right now than anyone above or below him on the list.

He bickers with Democrats and leaders of his own party. He makes testy remarks about his detractors. And, he takes controversial positions (some would say worse things) — on whether Muslims should be allowed to enter the U.S., on Saddam Hussein’s legacy and on building a wall to stop the flow of people from Mexico.

He’s chairman and president of The Trump Organization, which oversees Trump hotels around the world, Trump golf courses, and corporate and residential real estate projects.

He also has a slew of books out, including his most recent “Crippled America.” Others include “The Art of the Deal,” “The Art of the Comeback” and “Think like a Billionaire.”

When Trump was interviewed by Bankrate in 2009, he was involved in projects ranging from real estate development to his former NBC reality show “The Apprentice.”

He was in the beauty contest business, producing the Miss Universe, Miss USA and Miss Teen USA pageants, but sold the organization in 2015. He has his own star on the Hollywood Walk of Fame.

Then there’s the Trump merchandise — everything from furniture to bottled water to men’s cologne. His campaign website even offers a Trump presidential dog sweater for $15.

Started in the family business

Trump, who’s 70, got started in business helping his father Frank with real estate deals in New York. And despite his father’s assertion that his son had the Midas touch, he has suffered some significant setbacks, including bankruptcies and internecine battles with the board of Trump Entertainment Resorts.

I dealt with being millions of dollars in debt without going bankrupt.

The real-estate-magnate-turned-politician also has had a colorful personal life. He’s had famous wives (Ivana Trump and Marla Maples), famous divorces (Ivana and Marla) and famous weddings. His 2005 wedding to current wife Melania Knauss-Trump in Palm Beach, Florida, was one of the most talked-about celeb hookups of the year. The couple have a son, Barron William Trump, Trump’s 5th child.

His older children — Donald Jr., Eric and Ivanka — work with dad at The Trump Organization.

Well before becoming a presidential candidate, Trump sat down to mull over questions from Bankrate. We recently reached out to Trump campaign spokeswoman Hope Hicks for a comment and to request a follow-up interview with her boss, but she did not respond. Here’s what he told us during President Barack Obama’s first term.

Bankrate: You seem to have really embraced new social technology. You’re on Facebook, you tweet regularly on Twitter, you blog. What do you find to be the most valuable about this way of communicating? And how do you find time to do it?

Donald Trump: It’s fast, easy and accessible to many people. Those are good reasons, especially as I consider being an educator an important aspect of my business enterprises. The traffic is good so I know I’m reaching people. I’m used to getting many requests each day for comments on many things, so this does not represent a hardship to me nor is it time-consuming as I’m used to working quickly. I would recommend it to other business people, provided they keep the time requirements in mind. If they are not fast, it might not be the best thing for them.

Bankrate: You’re a grandfather, as well as a fairly new father. How do you weave family time into a busy life, and how important is it for a driven, focused businessperson to make time for family?

Donald Trump: Maintaining a balance has always been important to me and with my 3 eldest children working with me at The Trump Organization, I see them daily. I spend my evenings and weekends with Melania and our son Barron, and family has always been a strong foundation for me. It is important to keep priorities straight. When my children were growing up, no matter what kind of meeting I was in, their calls were always put through. That remains the same.

Bankrate: Your daughter Ivanka is also very busy and she just got married. How will you advise her to figure out the work/family equilibrium?

Donald Trump: I think she’s seen it in action, and I’ve always believed that people learn best by watching. She has a strong work ethic and an equally strong bond to family, so I believe it will come naturally to her.

Bankrate: What’s the biggest roadblock you’ve faced in your business life? And when you do get news that would be considered a major setback to most of us, such as in February (2009) when Trump Entertainment Resorts Inc. filed for bankruptcy against your wishes, how do you get past that?

Donald Trump: I dealt with being millions of dollars in debt without going bankrupt in the early 1990s, and I had to be tenacious and resilient. But I came back to be far more successful than before. I learned how important focus is. When I get news that is considered a setback, I am circumspect about it. Sometimes it’s for the best. Things work out, sometimes in even better ways than we might have expected or planned for, and no one wins all the time in everything. I’ve noticed things come around as they should and usually to my benefit in the long run. I just keep at it.

The single biggest mistake was losing my focus in the early 1990s.

Bankrate: Could you name the single biggest mistake you’ve made in business? And on the flipside, is there any one business decision you’ve made that you look back on and say, “That’s the best thing I’ve done”?

Donald Trump: The single biggest mistake was losing my focus in the early 1990s. Fortunately, I hadn’t lost my momentum and it worked out. Agreeing to do “The Apprentice” with Mark Burnett — against the advice of many people — was one of the best decisions I’ve made. It was a risk and I knew it, but look what happened. We’re going into our 9th season, and it had been predicted to be a one-season wonder when it first became a hit show in 2004.

Bankrate: Think about the most enjoyable weekend you’ve had in the past year. What were you doing that made it so good?

Donald Trump: I spent the day golfing on one of my beautiful golf courses and spent the evening with Melania and Barron.