When high gas prices fuel driver ire, everyone looks for someone to blame.

Create a news alert for
"economy"

Earlier this year, President Barack Obama pointed his finger at a popular scapegoat: oil traders. “We can’t afford a situation where speculators artificially manipulate markets by buying up oil, creating the perception of a shortage and driving prices higher only to flip the oil for a quick profit,” he said in a White House briefing.

So what does affect oil prices?

Oil refining makes up more than two-thirds the cost of a gallon of gas. And investors can affect oil prices when they buy oil futures contracts to protect themselves from price inflation or to simply trade them for profit.

Even though oil prices and the amount of oil speculation are related, they make up a small part of oil markets — 6.6 percent, according to a 2011 Congressional Research Service report on hedge fund speculation and oil prices.

Contrary to what some commentators and sitting presidents say, the laws of supply and demand reign supreme in oil markets.

Worldwide net demand for oil (consumption minus supply) has zigzagged over the past two decades (see graph), but the general trend has been an increase in consumption.

However, today there is a situation of rising prices and falling net demand — and here’s why. “There (are) a couple of things going on — Libya/Arab Spring geopolitical concerns, Iran beginning the latest round of saber-rattling and cutting into supply cushions again,” says Jason Stevens, director of energy equity research at the investment research firm Morningstar.

In other words, political instability in oil-rich nations can hamper oil supply. As a result, OPEC’s spare capacity fell by about 1 million barrels per day from 2009 to 2011, resulting in rising prices.

Gasoline prices also spike when major oil refineries are hit by a force of nature. In fall 2005, when Hurricane Katrina shut down many Gulf Coast refineries, prices for regular octane gasoline shot up from $2.10 to almost $3.10 for a short time.

Taxes and regulations to blame?

How about lowering taxes and lifting regulations on the oil industry? American Petroleum Institute spokesman Carlton Carroll says that would help. “I can’t say exactly how much reducing regulations would reduce the price that consumers pay at the pump, but yes, reduced regulations generally mean lower costs,” he said in an email.

Stevens says he believes the U.S. and state governments can do something to directly lower gasoline prices. “Gasoline prices could see a reduction if government taxes and regulations changed, as federal and state taxes make up (around) 10 percent of pump prices,” he says.

Back in the days of disco and big hair, oil and greenbacks were barely related. Nowadays, the U.S. dollar and the price of oil move, on average, in almost reverse lock step.

The chart below with data from the Energy Information Administration and Federal Reserve shows change in the dollar’s strength versus the change in oil prices since 2000. Since 1990, the two have become more closely connected. When the dollar loses strength, oil prices usually climb. 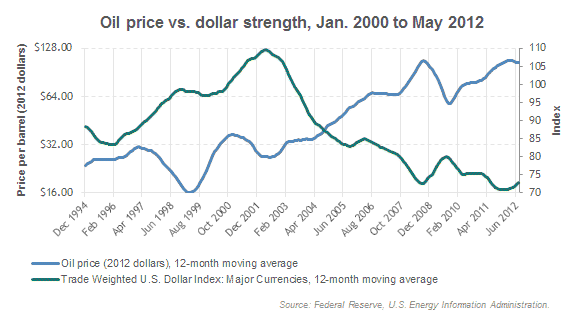 “Oil is sold on world markets in terms of dollars,” says Mark Thornton, a senior scholar at the Ludwig von Mises Institute in Auburn, Ala.

“That means that other countries have to sell their currency and buy dollars before they can buy oil,” Thornton wrote in an email. “This supports the value of the dollar. It also means that if the dollar weakens, it takes more dollars to purchase a unit of oil.”

Since the 2007-09 recession, the dollar’s strength index and oil prices generally have moved in opposite directions.

“When the dollar is weaker, foreign currencies are stronger, by definition. That means people in other countries can buy more oil for the same amount of money,” Kristin Forbes told U.S. News & World Report in 2008. Forbes is an associate professor at the Massachusetts Institute of Technology and a former member of the White House’s Council of Economic Advisers from 2003 to 2005.

If foreigners can buy more dollars for less of their currency, they can buy more oil, which means increased oil demand. That means higher oil prices and higher gas prices in the U.S.

Use the Strategic Petroleum Reserve?

In America, there are few options to instantly produce more oil.

Last summer, during the revolutions in oil-rich Libya and Egypt, the federal government released more than 30 million barrels of oil from the U.S. Strategic Petroleum Reserve, or SPR, where the government stores oil in case supplies run low.

What if the government tapped the strategic reserve again? Stevens says that would lower oil prices, at least for a while. “(But) every time we release barrels, we have to refill the SPR at a later date, usually at higher prices than we receive for the sales. Better to keep the SPR in reserve for true supply emergencies,” he says.

What all this means

The bottom line: Those to blame for high gas prices are anyone who taxes gasoline, buys oil, buys stuff containing oil, and/or increases the supply of dollars relative to other commodities and currencies.