The media frenzy that accompanies presidential elections brings a sharp focus on practically every detail of a campaign, from the candidates’ debate skills on down to their haircuts.

But for all the ink that candidates’ campaigns get, Americans’ feelings about their own personal finances and the economy likely will influence the outcome of the election more than any press conference gaffe or debate zinger.

MMore On Economics And Politics:

As part of the June edition of the Bankrate’s Financial Security Index, Bankrate asked Americans how much their personal finances would influence their vote in the presidential election.

The result? Nearly 6 in 10 Americans reported their personal finances will be either the “single most important factor” or “one of several important factors” in their choice of which candidate they’ll pull the lever for in November.

Bankrate’s survey was conducted by Princeton Research Associates International via landline and cellphone interviews from June 7 to 10, with a nationally representative sample of 1,000 adults in the continental U.S. The margin of error is plus or minus 3.6 percentage points.

Another 50 percent said the eventual winner wouldn’t make much difference to their personal finances, suggesting neither candidate has really convinced voters they can fix the U.S. economy, says Matthew Singer, a professor of political science at the University of Connecticut. 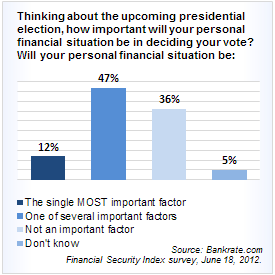 That 50 percent number also hints at the deep economic pessimism in the country as the campaigns ramp up, says Michael Walden, the Reynolds distinguished professor of economics at North Carolina State University.

“Perhaps people over the longer term will think, ‘Well, the previous administration we had, especially at the end of that, didn’t have a robust economy and that was a Republican. And now we have a Democrat. So, it doesn’t really matter,'” Walden says.

In many ways, that pessimism is well-founded, Walden says. “Most economists would argue it has been the most dramatic downturn since the 1930s,” he says.

Singer says that’s why it may ultimately be a litmus for the presidential race. “We know that the economy is going to be the most important issue in the election. And we know in particular, it is going to be really important to these people who are suffering so much,” Singer says.

Indeed, an analysis of the FSI and Gallup’s presidential approval rating shows a very strong connection between the personal finances of Americans and how people feel about their president, says Greg McBride, CFA, senior financial analyst for Bankrate.com.

“Presidential approval ratings zig and zag in close concert with Americans’ feelings of financial security,” he says. “Since late 2010 through May of 2012, the correlation is 0.84. A reading of 1.0 would be a perfect correlation.”

“What most political scientists will tell you is that the economy is the biggest driver of public opinion toward the president,” Singer says. “It does not explain everything, but it explains more than any other policy area, by a lot. Campaigns can matter, events can matter, gaffes can matter. But the sort of, ‘on average’ trend is going to be driven by the economy.”

The depth of the economic downturn has meant that the efforts undertaken by the federal government, including a costly bank bailout under President George W. Bush, a large stimulus bill under Obama, large tax cuts under both presidents and substantial monetary easing by the Federal Reserve have failed to relieve the economic stress felt by many Americans, Walden says.

“Clearly, economic indicators are better than they were two years ago. But for most people, they are not satisfied with that,” he says.

While the success or failure of the campaigns to frame the economy and other issues to their advantage clearly matters, how ordinary Americans fare between now and the election may have an outsized impact on who is sworn in next January, Singer says.

“If things improve, even a little, the Democrats can point to it and say their plans are working. If things worsen at all, Republicans will pounce on it as further evidence that change is needed. The change would have to be big enough for voters to actually feel it, but even a small shift will have an important impact on a close race,” Singer says.