5 financial adages to live by

Our grandparents didn’t have an app for keeping track of their income, sticking to a budget or saving money. They couldn’t click onto a website or find a cable channel for instant stock market quotes. They may never have met, let alone hired, a professional financial adviser.

Instead, they relied on simple, common-sense rules that even the pros will vouch for as sound money management advice. Maybe they borrowed a credo from someone famous — such as Ben Franklin’s, “A penny saved is a penny earned” — or maybe they came up with their own.

We asked a few money management experts for their favorite examples of old-fashioned financial advice that still works. Here are five financial planning tips that are grandma-tested, expert-approved.

A top recommendation from any financial adviser is to set aside money for your retirement savings and emergency fund before you start spending. It can be a difficult concept to embrace, especially when your immediate concerns are the looming monthly bills.

But those who do practice the habit of saving first, with automatic savings accounts and 401(k) contributions, often find they don’t miss that money when they don’t see it in their paycheck.

When paychecks in McGervey’s household went into the checking account, unexpected expenses seemed always to eat into the funds available for savings, he says. About 10 years ago, the McGerveys decided to redirect those paychecks into investment accounts.

“Now we have those gross assets hit our invested assets and just push out what we need to live off each month,” McGervey says. “It’s another form of paying ourselves first.”

Live within your means

“When you spend, write it down,” Gallegos says. “If you can’t track it, you’re not going to be able to measure it, and you won’t know whether you are following that budget.”

McGervey has often seen clients get a little too impatient to reach expensive goals such as buying a dream home. One client meets regularly with McGervey to talk about the stress of the debt he took on to buy a big house that he really couldn’t afford.

“Often, people spend money they don’t have to buy things they don’t need in order to impress people they don’t even like,” McGervey says. “It always comes down to core values.”

Buy the best you can afford

The flip side of the warning not to spend more than you can afford is that the cheapest choice isn’t always the most cost-efficient.

Rod Griffin, director of public education for Experian, says his grandfather taught him he should always buy the best he can afford.

“There were two parts to that,” Griffin explains. “The first was that, in theory at least, if you get the best quality that you can get, it will save you money in the long run because the product should last longer.”

The second part was having a clear understanding of what affordability means. In the view of Griffin’s grandfather, even an investment purchase should leave enough cushion in the budget for emergencies.

“If you can afford something, you’ll be able to continue to make payments if it’s purchased on credit, even if something unexpected happens,” Griffin says.

Be wary of credit cards 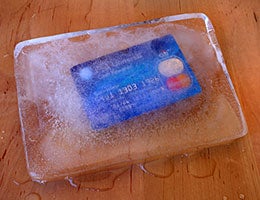 If you’re constantly making credit card purchases that you can’t pay off each month, learning the lesson your credit-averse auntie tried to teach you will be quite expensive.

It’s not that buying on credit itself is evil, as your aunt may have believed. The accumulation of debt, aided by that devilish compounded interest, is the problem.

“Understand that if you use credit, you’re probably going to have to put off buying something else until you pay off that debt,” Griffin says.

If it’s hard for you resist swiping the plastic even as your debt grows, New York attorney and consumer debt resolution specialist Leslie Tayne suggests leaving your credit cards at home when you go shopping.

“It will reduce the impulsiveness in spending,” Tayne says, adding that she practices what she preaches. “When I can’t readily purchase something, I don’t buy it.”

If you have a newfangled mobile credit card app on your smartphone, that might present a whole other temptation to conquer.

Waste not, want not

Tayne notes that today’s “reduce, reuse, recycle” mantra harkens back to the “waste not, want not” adage of our grandparents’ day. From carpooling to clothes swapping, families are still looking for creative ways to save money by conserving resources.

The latest take on the hand-me-down tradition is online clothing-swap sites where parents trade their kids’ outgrown garments for someone else’s, says Gallegos, who recalls wearing his older brother’s clothes when he was growing up.

Repurposing old purchases is another evergreen money-saving tip Gallegos endorses. Instead of buying a fancy set of containers for organizing the stuff in your home, take inventory of what you already have. An empty egg carton can store buttons or screws. Your kids’ old Easter baskets can display guest towels. You get the idea.

The old-school way of money management was to make do with what you had, and use it until it wore out. Back in the day, people didn’t go out and replace something the instant it went out of style. They didn’t buy a special gadget for every task or a new outfit for every occasion.

“Those living in the 1930s, ’40s and ’50s would never even consider purchases like these,” Gallegos says.