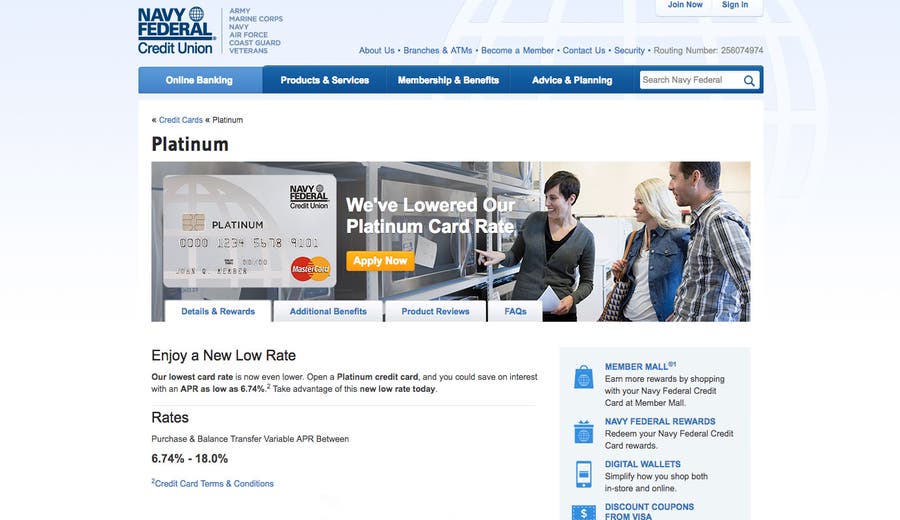 Editor’s note: Some of the offers below may have expired.

When the Federal Reserve increases its benchmark interest rate — as the central bank did in June — credit card annual percentage rates tend to follow. But there are still some good deals to be found on low-interest credit cards.

What’s more, at least one issuer has pushed rates in the opposite direction.

Navy Federal Credit Union recently reduced the APRs on its two most popular credit cards. The credit union last month cut the low end of the rate range on its Platinum credit card two percentage points to 6.74 percent APR; the low-end rate for the Go Rewards card is now at 9.74 percent, down from 10.24 percent. Your credit history will determine whether you qualify for the lowest rate.

The new rates on these two cards are among the lowest available in the United States.

If you’re carrying a lot of credit card debt, or you have significant back-to-school expenses coming up, a card with a low APR could save you a ton. If you owe $10,000 on a card that has the average variable interest rate of 16.57 percent, you could rack up as much as $1,438 in interest charges over one year if you just make minimum payments. Use a card that has a 6.74 percent APR and you’ll top out at $560 in interest fees over the same time period.

“We thought this was a great opportunity for us to make a change in our portfolio and make a change for our members,” says Matt Freeman, head of credit card products at Navy Federal.

Why can credit unions do this?

Because Navy Federal is a credit union and operates as a member-owned non-profit, it can offer lower upfront fees, interest rates and penalties then a traditional bank, whose bottom line is revenue-driven.

Like most credit-union issued credit cards, you have to be a member to apply. Membership in Navy Federal’s Credit Union is restricted to qualified military personnel, employees and their families.

There are other credit unions with low-interest and even zero interest cards that grant membership if you join a group or donate money to a specific charity. For example, you can join NASA Federal Credit Union by signing up for a free membership to the National Space Society, and then apply for its Platinum Advantage Rewards card, which has interest rates starting at 10.90 percent.

Alliant Credit Union will grant membership to anyone who donates $10 to Foster Care to Success, a charity that aids teens throughout the United States living in foster care. Complete your membership by opening a savings account and depositing at least $5. The paperwork might be worth it to you if you have your eye on Alliant’s Visa Platinum card, which has variable interest rates starting as low as 9.99 percent.

If you don’t qualify

If you don’t meet the eligibility requirements, or don’t want to join a credit union, there are several bank-issued low-interest credit cards that still offer rates below the average variable credit card interest rate.

PNC Core Visa and SunTrust Cash Rewards and BankAmericard, for example, all offer rates well under the industry average to those who qualify.

If you know you can pay off your debt in a short period of time, you may also want to consider a balance transfer card that offers 0 percent APR for a promotional period of time.