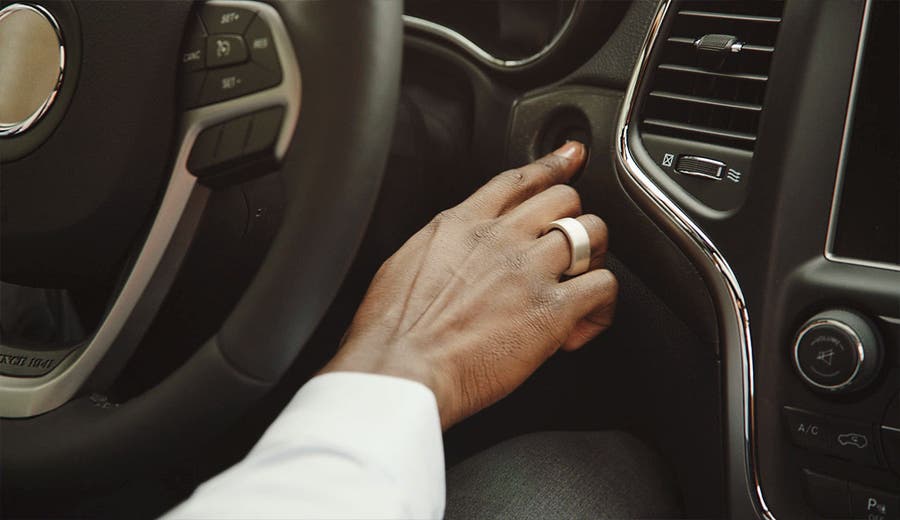 Sick of swiping? Put a ring on it.

A new smart ring, called Token, aims to replace your credit cards and keys with a fist bump. Combining several everyday items into one encrypted gadget, the device can securely store your credit card information, replace your house key, car key, entry card for the office, and even log into your computer.

For serial misplacers or those who struggle with multiple passwords, it has the potential to simplify your life, and is far less invasive than implanting a microchip under your skin to store your information.

Encased inside the sterling silver and plastic band is a small chip that stores your information, and a biometric sensor that reads your fingerprint to activate the ring’s functions before you put it on. The device can tell when you remove it, and is deactivated until you scan your print again and put the ring back on your finger.

When it comes to making payments, just tap the ring at the point of sale like you’d do with your mobile wallet. Currently, the ring is only compatible with the Mastercard and Visa networks, but should be able to store up to five different cards, although you’ll have to choose one as a default, just like with a mobile wallet.

The initial set-up is done via smartphone app, available for iOS and Android. The app is where you’ll enter your credit card information, and choose the default card. To enable log-ins to your computer and websites, there’s a desktop app for Apple and Windows operating systems.

Unlike other jewelry, this ring needs to be charged. Token says the ring under normal use can go approximately two weeks without needing to recharge.

To ensure that you’re the only user of your ring, the fingerprint sensor on the inside must be activated every time you put it on, and a separate optical sensor will shut the ring off when it’s removed. If you lose it you don’t have to worry about anyone else using it, says Shapiro.

“No one else would be able to activate it as it only works with your finger,” she says.

This is known as two-factor authentication and is commonly used as an extra layer of security — similar to entering your ZIP code at the gas pump or your PIN when using your gas rewards credit card. The two factors in this case are the ring and your fingerprint.

Although no technology is foolproof, the Token ring uses the same Bluetooth and NFC technology as a smartphone to unlock and authenticate your encrypted information at your desktop, point-of-sale, office, car or home.

The ring is also water-resistant, so it’s OK to shower and wash your hands with it on.

Should I get one?

The Token sold out of its pre-sale run and will begin shipping the first batch in December. Early adopters and gadget geeks who don’t mind the price — $250 for the basic brushed silver and another $50 for the plated rose gold or black rhodium finish — are most likely to jump on board when the ring becomes available for sale to the public in Spring 2018.

If it’s worth it to you to spend that kind of dough to consolidate several of your everyday essentials, you may want to consider it, or wait and see if it becomes more ubiquitous. Once you buy the ring, there’s no additional fee to use it.

If this isn’t the right product for you, just wait. More are coming. Wearable use is expected to grow 14 percent a year for the next five years, according to Forrester Research. By 2022, consumers will have purchased more than 189 million devices, from watches to rings and other wearables.

Where can I actually use this?

If you have it, you need somewhere to use it. What Token has in its favor are partnerships with Mastercard, Visa and Microsoft, and also HID — the largest maker and programmer of office entry cards — so it’s probably compatible with a few things you already use often.

Although it can’t replace everything, in addition to your favorite credit cards, you can have the ring programmed to replace the security card you use to gain access to your office. You can also enable it to log on to your PC or Mac computer with two taps instead of having to manually type your password.

For an additional $100, you can buy a Token-compatible smart lock for your front door or send the company your push-button car key fob to program with your car’s lock. And, via its relationship with Mastercard, the ring will be able to be used at Masterpass-enabled public transportation systems, letting you tap and go at the subway in several major cities.